Tilly and the Wall: a Rescue Rooms review

I love the Rescue Rooms in Nottingham, since even after a slight refurb, the decor remains suitably dank. Still, it's a little spruced up now but as intimate as ever. (If not as claustrophobic as The Social was under the heat of Camera Obscura!)

Anyway, last Monday - before the fall - we went to see Tilly and the Wall (no rhyme intended). In support were two bands: The Displacements and The Little Ones.

The Displacements (of Leicester) were lively and energetic enough, but ultimately didn't really set our world alight. The bass player was quite entertaining to watch and clearly kept the drive of the band going, but the singer was perhaps a little too 'strutty' for my liking. They are VERY young (the singer's brother [?], drummer [?] looked about 12). They could go far though...

The Little Ones were on another level entirely. The LA troop were clearly at a different stage of performing confidence. They reminded me - for some reason - of Yo La Tengo, though there is little to suggest why that would be so. Still, they were very fun to watch, they were clearly enjoying themselves and with a 27th birthday amongst the group they too looked very young. 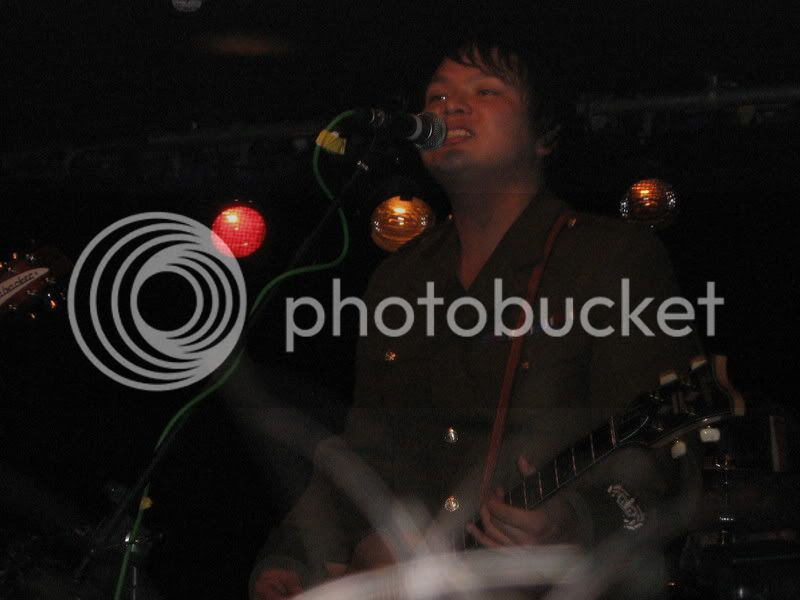 Now, being of the age where even thinking about taking a camera to a gig was tantamount to guaranteeing it would be taken off you and its film destroyed if not the camera itself, I'm still a little wary about photography at gigs. But given that most phones now have cameras, it's hard to see how even small venues can demand a complete ban on photography. So with some trepidation I was talked by Neil into taking one or two pics at this concert. I managed to get reasonable shot of The Little Ones, before finally hitting my stride with the main act. Of course, my location (just behind very tall people and people with legitimate camera purposes for being there) meant I got some heads in the way, but still: hopefully you can capture some of the atmosphere and delights of the show (apologies for the shot where Jamie looks more like she's doing the funky gibbon...): 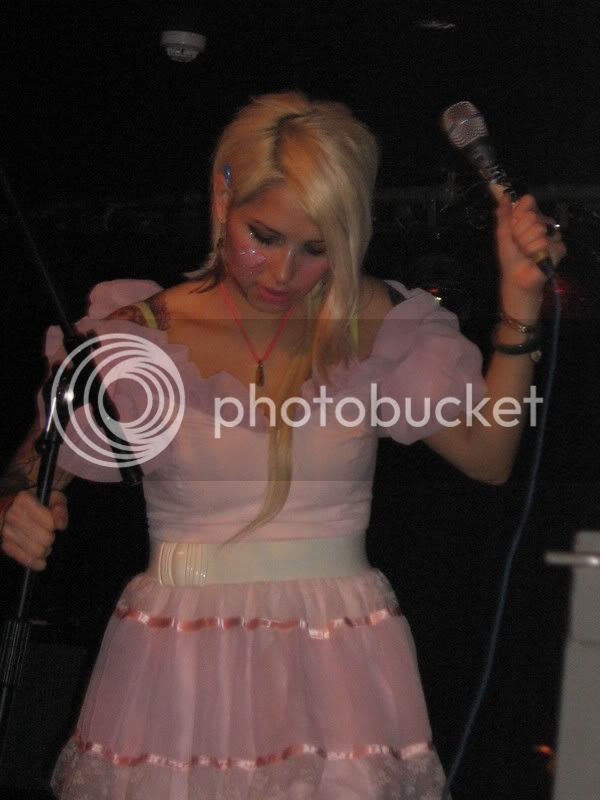 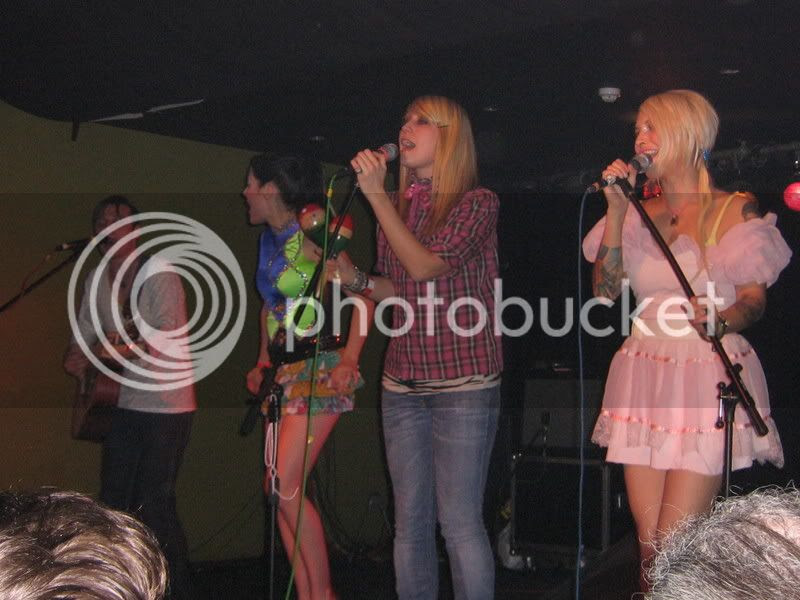 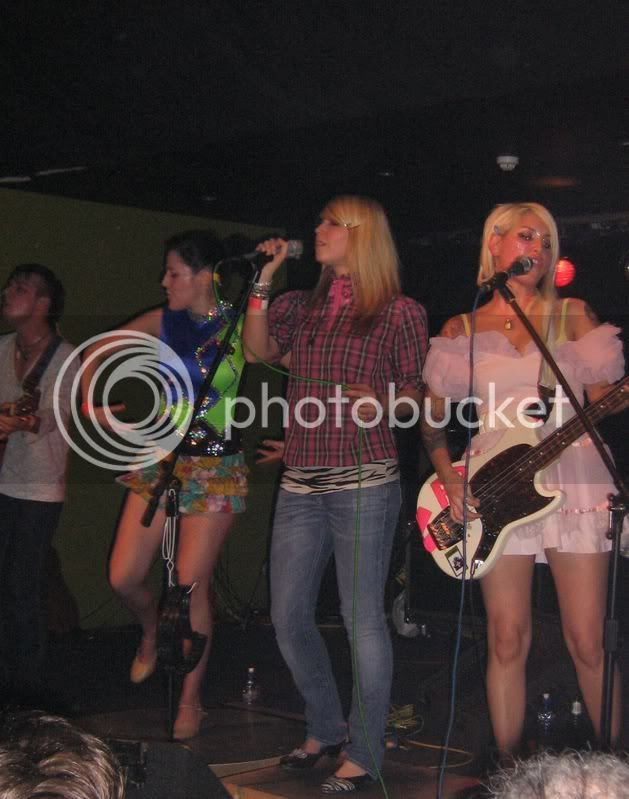 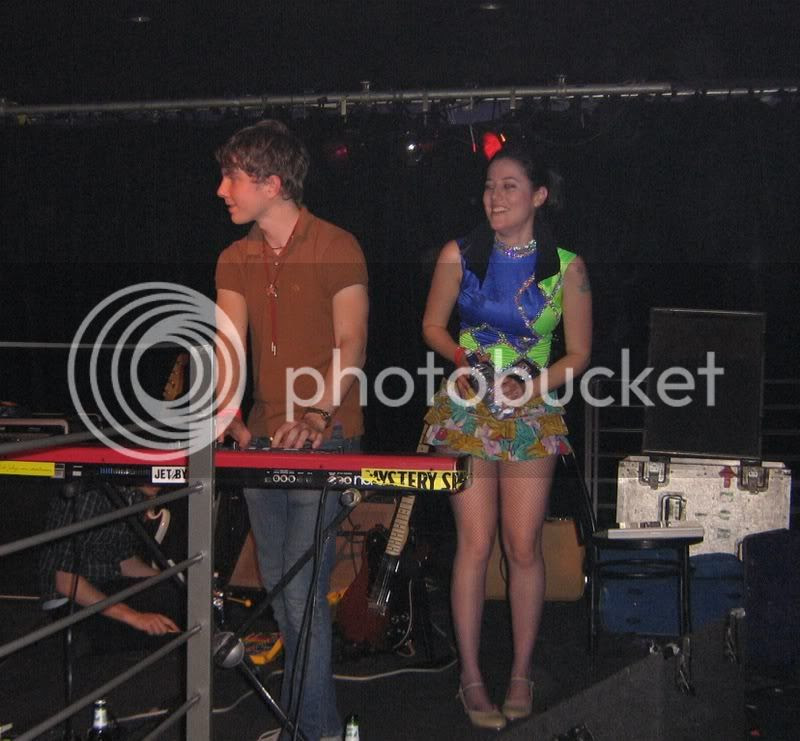 As the Guardian review at the end of the week intimates, tap-dancing percussion is what drives and shapes the band's live performances but it would be an injustice to suggest that this was the only dimension of the band. Jamie takes the lead on this task for sure (she's also now married lead male vocalist Derek), but centre stage at Nottingham were the delightful Neely and Kianna who also took on some tapping duties, as well as providing much of the delightful and uproarious harmonies (even when swearing there little Omaha hearts out!). With Derek and Nick at the sides it's a well-balanced performance. There songs have a delightful mix of folky country charm, with great pop sensibilities thrown in. I was particularly thrilled to get the chance to yell along with "Sing Songs Along" (my intro to the band thanks to George). But it was clear from the crowd's fond reaction that the band have been garnering attention for some while now and had a wide repetoire of songs to draw on full of catchy melodies and quirky lyrics.

A joyful evening.
Posted by Lisa Rullsenberg at 5:49 pm

Labels: Live Music, The Rescue Rooms, Tilly and the Wall

Very jealos Lisa, it sounds like a great evening, plus the girls are hot!!

Talking of bands, I've just found out that Amplifico are finally playing Aberdeen and on a Saturday night as well... and it's of course the weekend that I'm in Manchester for Music Paul's 30th!! Grrr!