Doctor Who: pulling all the crackers from the bag at once - "The Name of the Doctor" Saturday 18 May 2013

Well, sorry, whatever flaws you may think this (half) season has had, this was a CORKER. 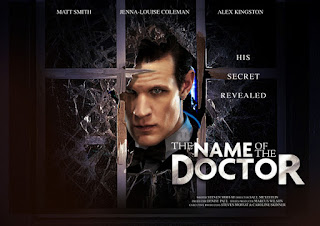 From the pre-credits sequence, to the goodbye, to the final seconds... gah: nerdgasm alert!

Spoilers, obviously, after the long delay...

All clear?  Good, then we'll begin. Sorry this is brief.  I'll try to add to it (I had to sneak watch on Sunday - family committments, and then sneaked a second watch with some of the family.  Will do it all again on Thursday!)

Oh Mr Moffat, just when we thought you were only able to prove how difficult it is to show-run multiple projects, you pull this gem out of the bag and dazzle us all over again. You sold everyone a total pup that this would reveal 'The name of the Doctor', whilst as ever doing so much more than that.  Nice learning from Gaiman's "The Doctor's Wife".  It's about how you subvert the set-up and not the set-up itself.

From the pre-credits sequence, scattering Clara like confetti into the Doctor's timeline, complete with the footage being 'aged' to at least reasonably match the original period, I was just tingling with glee.  We had Vastra, Jenny and Strax back again on fine form - full of humour and verve, but also - especially with Jenny - some emotions.  "I'm sorry, I think I've been murdered".  *sob*

And we had Professor River Song back as well: and if this MUST be her finale, then what an ending.  Just heartbreaking.  The Doctor cries - time is rewritten, and then underwritten, with Clara making things possible by being impossible.  Adorable.  With so much cross-referencing to old Doctors, this was a nerdgasm on stilts.  But somehow it worked.  Colleagues squeed at me this morning in a way they hadn't for a while.  I laughed - and cried - when River and the Doctor kissed.  And I yelped at my unspoileredness when John Hurt got his on-screen caption.  Whatcha doing Moff?!  Our brains will explode by November! 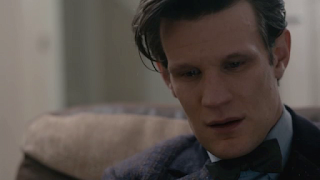 Things I will forgive them:

Richard E Grant - villain by numbers, didn't make as much sense as it should, but fine to see him getting a shot at the narrative

The Whispermen - someone call Joss Whedon quick!  They've obviously worn out the BBC copy of "Hush" (Buffy season 4) because this was totally 'The Gentlemen' revisited...!

Can't even shout, can't even cry
The Gentlemen are coming by
Looking in windows, knocking on doors
They need to take seven and they might take yours
Can't call to mom, can't say a word
You're gonna die screaming but you won't be heard.

Over the coming couple of weeks, things are changing.  Furniture being dismantled and assembled.  Things moving around, being cleaned, tidied, repaired.

Incentives are wonderful things: the Roberts are coming...
Posted by Lisa Rullsenberg at 10:14 am 2 comments: