Albums I cannot believe I do not own: an occasional series 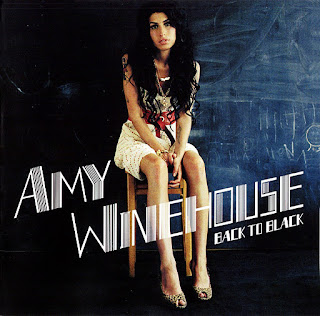 Drifting as I am through my music collection at the moment, updating the CDs on my computer and revelling in re-filing the shelves, I'm looking at all the things that seem to be absent. I'm therefore baffled to discover we own Amy's first album "Frank" (a fine work anyway), but why this and not also the magnificent Back to Black?
Posted by Lisa Rullsenberg at 5:07 pm 4 comments:

TV of 2011 - highlights from the Rullsenberg/Roberts household

A bit early yet I know, and there have been other things I've enjoyed this year on TV, but these are my personal awards for the year. And you'll spot No Downton Abbey. Sorry. Not my cuppa, as much as I love the frocks.
Best International programme
Forbrydelsen
So back in January 2011 The Killing crept into our house and took our hearts. Sarah Lund for heroine of the year? Enjoying Forbrydelsen II but the roller-coaster of the first series swept us away.
Best Documentary
Educating Essex - Although this hit me during my erratic period of not blogging much, this was certainly documentary of the year without a doubt. Broke my heart every episode with its honesty and humanity (as I commented on FB). Best advert for comprehensive education ever.

Update: and an honourable mention for The Agony and the Ecstasy about the English National Ballet - beautiful and agonising in equal measure.
Best Fantasy Drama
The Fades - It almost felt too good to be true when it started. It was like it ticked EVERY possible box for Rullsenberg. Gothic horror? Check. Teen Drama? Check? Name-checks and hat-tips to fantasy, sci-fi, horror? Check, Check, Check. It could have been too formulaic for its own good, but instead it was charming and horrific in the best ways possible. A second series would be lovely - but this was too perfect to damage if it means a drop in quality.
Update: Best Conspiracy Drama
The Shadow Line - although Hidden was very enjoyable, it was lightweight compared to the density of The Shadow Line. With wonderfully atmospheric music (courtesy of Emily Barker's "Pause"), sound and photography, along with some cracking performances - Eve Best, Chiwetel Ejiofor, Chris Ecclestone, Stephen Rea, Lesley Sharp, Antony Sher, Rafe Spall and more - it proved a tense highlight of the television year.

Best ongoing series setting up for the future
Doctor Who - As you will know I applauded at the end of "The Wedding of River Song". After a season that included such pleasures as the super-creepy Silence, the magnificent Neil Gaiman's beautiful "The Doctor's Wife" (and its companion Confidential episode, a work of pure pleasure), the punch-the-air revelations of "A Good Man Goes to War", the madness of "Let's Kill Hitler" and all the heartache around Rory and Amy, well.... anyway, suffice to say I'm so excited by the prospect of the Xmas special it almost hurts.
Posted by Lisa Rullsenberg at 4:03 pm 2 comments:

Labels: Doctor Who, Education, The Fades, The Killing, TV

Blimey it can get a bit out of date can't it? have been through and done some shifting of stuff into 'Resting Blogs' and deleting some old no-longer functional links.

Hope I have captured them all.
Posted by Lisa Rullsenberg at 3:32 pm No comments:

Last year, Bellowhead lost out on having access to a big space at Derby and had to content themselves with the ridiculously small space of the Darwin Suite at Derby Assembly Rooms.

It was VERY full indeed.

This year, thankfully, they got the large Assembly Rooms space itself --- and it was STILL rammed to the rafters (plus full on the seated areas too).

Seeing Bellowhead is always a joyous event --- this is the fifth time I've seen them (Derby Folk Festival, Nottingham Trent University, Derby Darwin Suite, Summer Sundae 2011), and I've never finished their sets less than bouncy, deliriously happy, and utterly soaked to the skin in sweat. I usually have to 'wash' my hair in cold water to at least make it so it's only water running down my back and not icky perspiration.

But I don't care. Songs about death, sailors, fairs, unrequited love, whores, drink, and death (always death), with the finest tunes you could hope to hear to get your feet tapping (I'd need to have broken legs to want to see Bellowhead from a seated position - they are MADE to be bounced and danced to with high spirits).
They opened with a firm (old) favourite of Jordan - which had me singing along from the start - and ended with bouncing. It was as ever mucho fun.

What always charms me about them is that they are such a great collective - yes, Jon Boden is a fine charismatic front-man, in turns manic, beguiling, faux-bashful and intense - but everyone gets their moments in the limelight throughout the show. It's hard to resist the bouncing dancing of the brass section (Andy Mellon on trumpet is usually one of the first to command more clapping and bouncing from the audience) and the pose-striking humour of the strings section (led by the ever laconic Paul Sartin), let alone the jumping-from-the-speakers mandolin player Benji Kirkpatrick and the steady preparedness of percussionist Peter Flood to break his ad hoc percussive accoutrements. and we should not forget Boden's partner in folk - Jon Spiers - who came on before the gig to check his pedals etc dressed in a workman's coat and wearing the most ludicrous fake beard ever ---- given he'd gone for a great Movember moustache anyway, I'm not sure what the disguise was for, but he plays accordions like a demon. (And a special mention for saxophonist Brendan Kelly who not only manages the excess of playing two instruments simultaneously, but also risked his life in Derby by declaring his home town as Nottingham. Dangerous!)

Consequently, they are a folk band, but this is as far as you can get from anything staid and boring (if that's what you mistakenly believe Folk to be). They certainly have a sense of fun like no other band you can imagine - witness their Bus Song a Day to accompany their tour, which saw them become superheroes for the visit to Derby.


In fact you can get a good idea of their approach from their YouTube channel - thisisbellowhead.

But there is something special about seeing them live, and the audience interaction/engagement with their music: this is captured quite well in this video of one of their recent gigs doing an established favourite 'London Town' (with its crowd-yelling chorus - with simple hand dance movements - of "up to the rigs, down to the jigs, up to the rigs of London Town')

And for sense of their climatic excitement, this video (complete with joyous shrieks from the audience) sums up the exultant pleasure of a Bellowhead gig.

I recommend them to anyone who gets chance to see them, and if you cannot, then at least get hold of one of their live DVDs and/or watch them live on YouTube. It's an uplifting experience you should enjoy.

Additional Note
A little mention for Ahab who provide a very pleasant Americana-style support to Bellowhead. Good harmonies, some fine guitar-playing and great engagement with an audience - despite such a significant majority not being there to see them. Being support is never easy, but Ahab did a fine job of the task, winning new appreciators of their style.
Posted by Lisa Rullsenberg at 12:50 pm No comments:

I frequently forget (temporarily, sometimes permanently) my passwords for online accounts. Hey: there are a lot to recall.
Hence there is also a rullsenberg account on LibraryThing from when I couldn't recall my darn password.
Anyway: lately I have been trying to make RullsenbergLisa's LibraryThing more representative of the Rullsenberg and Roberts household of books. (See sidebar). It's proving both complex and addictive. I keep realising how many I STILL have to add, what absolute gems we own, and getting increasingly frustrated at Neil's more laid-back approach to book storage ("it's in my room somewhere").
Me: I try to keep all books of the same sort together. Fiction along with plays, scripts, and Shakespeare-related stuff (the programmes etc are on another shelf as we have too many to accommodate). Audiobooks on CD. Poetry. Biographies. America-related (mostly history and politics). Art history has several locations - feminist and women's art history; art catalogues; architecture... Doctor Who stuff. Buffy stuff (mostly). Music stuff. Books about books and writing. Literary criticism and history. Essays. Books about auto/biographies. Religion. Graphic novels. Film and TV related. Gender and sexuality. Books about or related to Surrealism and Peggy Guggenheim.
It goes on.
We love books....
Posted by Lisa Rullsenberg at 2:42 pm 2 comments:

I LOVE these recommendations/rules on what you can carry in a MPH book-bag.
Posted by Lisa Rullsenberg at 2:40 pm 2 comments: 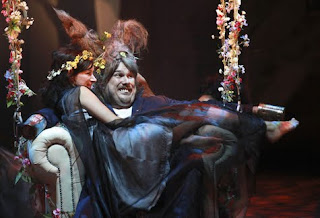 Aside
Helen Lisette missed out on seeing Arsher Ali as Puck/Robin Goodfellow (and his other guise of Philostrate), and instead saw Lanre Malaolu whom Neil and I last saw in Marat/Sade playing the exceptionally onanistic Duperret. (Indeed, we struggled to imagine him as Puck, but HLW assured us he was very good indeed).
Posted by Lisa Rullsenberg at 1:29 pm 2 comments: