Framing comment: My O level Shakespeare text was "Henry IV part I", which means it has a special place in my heart and memories (even though  the tape recording we were regularly subjected to at school was less than wonderful, with a Hotspur who had more accents than Russell Crowe was accused of having in Robin Hood). 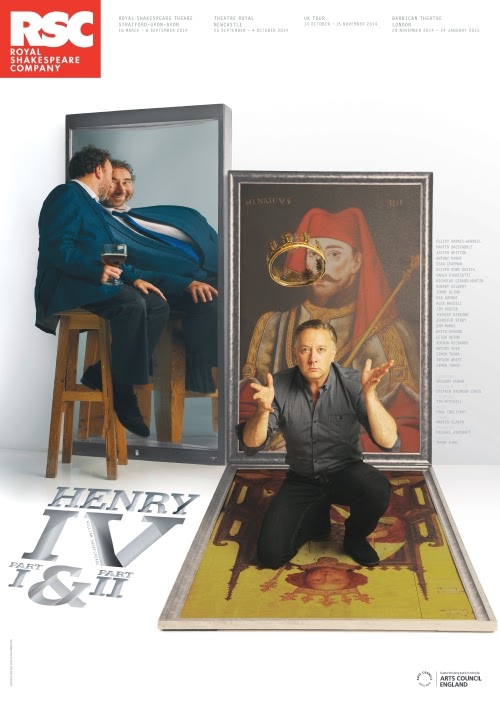 We'll be seeing Part II later in the season, but for now I wanted to immerse myself in Part I, attempting to rid my mind of the experience of seeing this play at the Globe a few seasons ago with the marvellous Roger Allam as a memorable Falstaff.  I don't think I'll ever quite move Allam from my mind, but Sher is such a fine actor that he nevertheless takes the role on with glee and gusto.

The RSC under Greg Doran take a conventional medieval staging for Henry IV Part I, and bring a wonderful cast to the production with fine echoes for those who saw the earlier Richard II.  Indeed, the opening scene with King Bolingbroke, penitent and praying for forgiveness for his regicidal actions, is even haunted by the ghost of Richard. (I felt sorry for the actor who had to don Tennant's white robe and a wig to figure his presence from gloomy shadows on the balcony over the stage to Jasper Britton's still-shaken Henry IV).

Although we saw an early preview (first preview was 18 March), it already felt very polished as RSC productions usually do.  Sir Anthony Sher is clearly having a whale of a time, grizzling joyously as Sir John Falstaff.  He shakes effectively from the drink; he clearly adores Hal; and he is so in love with life that all his errant ways are but means to survive another day for drinking.  His deception is not malice - he believes his lies even as they run away from him ("A hundred upon poor four of us").

It is the interaction between Harry Monmouth (Prince Hal, wonderfully played by Alex Hassell) and merry Jack Falstaff that drives the force of the play as the Prince moves from his embedded life of wastrel indulgence and humour to bravery on the battlefield against his changeling 'brother-at-arms', the fiery Hotspur, Harry Percy.  Falstaff remains present throughout this shift and Hal cannot quite abandon his adoration of his alternative father figure, even as Falstaff blatently lies about killing Hotspur and feigning his own death.  Yet we know from early on that things will turn, as prefigured by the wonderful Act 2 scene 4. Both Hal and Falstaff play at being the King and exchange on the actions and merits of Hal's behaviour and the company he keeps: it is a comic and dangerous impersonation of the King that turns its humour on its head in two simple phrases: "I do.  I will."  Moreover, Hal has already let the audience in on his secret self (the soliloquy at the end of scene Act 1 scene 2), a self that he knows will willingly abandon his friends and bawdy life.  He will banish "plump Jack".  We know, eventually, he does.

But in the meantime, we have one of the Shakespearean plays that is most playful with genres, switching eagerly between history to tragedy to comedy.  There are battles, references back to the murder of Richard, deaths amongst the families (for so many are interrelated back through the bloodlines from King Edward III), but there are also the aforementioned mockeries of Kingship and courtly power, demonstrations of cowardice, bawdy associations and much drinking of sack.

For those who delight in ensemble performance, we have several casting reiterations from Richard II, that echo and re-employ actors to fine effect.  These include resurrected Antony Byrne, previously Mowbray, who comes back as Worcester, who does not take the King's advice to make peace and instead leads "three knights... a noble earl and many a creature a else" to their deaths in the culminating battle of the play,  Sean Chapman reappears as Northumberland, father to a maniacal Hotspur (Trevor White), with the latter all growed up from the feisty naif figure who appeared in Richard II (when played by Edmund Wiseman) into a positively unhinged warrior with a wife he doesn't quite deserve (Lady Kate Percy, played with considerable vigour by Jennifer Kirby).  Sam Marks, a finely sycophantic Bushy in Richard II, also reappears here, as foil to Prince Hal in the form of Poins, the transitional friend between the life that Hal appears to live (the sack-soaked clockless days with Falstaff, with the cries of "anon, anon" from hapless Francis) and the life of court and valour that as Prince Henry he will instinctively re-take by the end of the play.

What is charming about this production is that it does not appear that the cast/audience are forever waiting on Falstaff to reappear (although Sher is delightful and clearly appreciated by the ensemble cast).  Everyone holds their poise, even as Hotspur runs around the stage twitching for a fight, even as he finds he forgets the map that will mark out his borders of power (which of course he rails against).  At the centre of the play is the now quieted King, the Bolingbroke who took the crown from Richard's cousinly hand, who longs for a son who would live up to the bold actions of himself or at least that of rival Northumberland and his fearless son Hotspur.  But in the end, King Henry IV comes to realise that there is more to his seemingly errant son than wasted days of sack and whores alongside merry Jack, and that a Hotspur for a son is no gift at all as the latter rages to his death near pointlessly.  Of course we all love Falstaff's wit and self-delusion, but we also know that forces of power will move on and past him, that his beloved Hal will throw off his "loose behaviour" and shine far better as a son to the King, and that honour - that "mere scutcheon" - will come to the fore.

I'm looking forward to seeing Part II (which I am far less familiar with as a play, something I always like because I like not having too many preconceptions), not least to see more of Paola Dionisotti as Mistress Quickly, but also to watch Oliver Ford Davies, always an excellent actor, taking up the role of Shallow.  I'm also looking forward to seeing upcoming Elliot Barnes-Worrell more as Hal's brother Prince John. But that is for a later date.
Posted by Lisa Rullsenberg at 6:45 pm 8 comments: