Dear Norm - whose blogging is in turns inspiring and a little intimidating (I've become rubbish at this blogging malarky as the technology and means to do it has vastly lagged behind my wherewithal and energy) - has been blogging for a DECADE at Normblog!

Honestly - Norm you put us to shame even as you spur us on!
Posted by Lisa Rullsenberg at 2:36 pm 1 comment:

Aquatopia: a gallery review (to break a bad pattern)

Aquatopia is the new show at Nottingham Contemporary Art Gallery (locally known as 'tempreh). The subtitle of the show is 'The Imaginary of the Ocean Deep', and to be honest I think it is one of the BEST shows that the gallery has done.

What I think I like about it most is that it combines contemporary art with historical material - putting things into context.

It's also a dense show - the galleries feel FULL: and in a white space, all too often the shows have felt thin, feeble, scarcely enough content to fill one room let alone four.

So we get a show juxtaposing Turner's sea monsters alongside Odilon Redon's illustrative visions; we get sea squids of various shapes, sizes and textures (including Spartacus Chetwynd's disconcerting 'enactment' of Hokusai's "The Dream of the Fisherman's Wife", itself a pretty alarming set of imagery), and we get the smooth sculptural flows of Hepworth sat just opposite a 19th century diving helmet.  You get to see Marcel Broodthaer's mussel shells and various of Christian Holstad's sea-squid 'creations' draped around the gallery ---- each called "This is not a life-saving device".  Well indeed.

To accompany the show there is also the usual variety of talks and other events - films screenings, discussions, documentary presentations, workshops etc.  Everything from the Lovecraftian legends to viewing the deep sea world, Hollywood B-movie sea monsters to ocean soundscapes.

It's a bizarre show in many ways - especially in land-locked Nottingham - but it's worth catching here.  For those who want a more 'apt' setting, an expanded version will be shown at Tate St Ives later in the year.

You should come to 'tempreh.

And at least I have broken the bad pattern of not blogging.  I'm getting rubbish at this aren't I though?!

Posted by Lisa Rullsenberg at 11:06 am 3 comments: 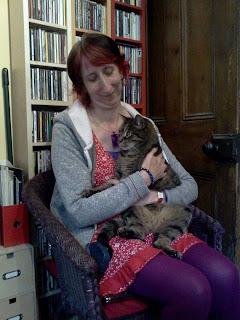 This is a cat being wrestled into loving submission by virtue of having been peskily jumping on the kitchen surfaces.  Same cat had paw stuck in my mug (foolishly the milk had been put in advance and the kitchen left... fatal error!)

I will add to this post but wanted to get something on this blog before I lose it.
Posted by Lisa Rullsenberg at 10:45 am 2 comments: