I listen to 6Music mostly, so this is quite difficult to answer: I don't tend to listen to the schedule that is more playlist driven (evenings and weekends only) and otheriwse it's the World Service, Radio 4 and occasional Radio 7 Radio 4Extra.

Still: over the last week or so I have been hearing a fair bit of the new Fleet Foxes album 'Helplessness Blues' which makes me a very happy woman (since I luffs that band).


Posted by Lisa Rullsenberg at 2:21 pm No comments:

Cannot believe that at one point I loved the cheese that is Robert Miles' Children!
Posted by Lisa Rullsenberg at 1:21 pm No comments:

Oh heck... I feel someone else should choose this.

Still, in absence of someone else's intelligent supposition, is there any girl who didn't identify with 'At Seventeen' by Janice Ian? 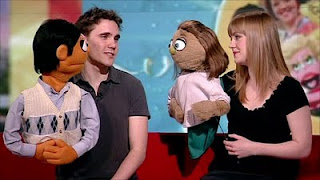 Most of you will already be familiar with the very modern and adult puppet musical Avenue Q. Heck, its been around since before Gary Coleman died. However despite previous attempts to schedule seeing it in London it has taken the til the show goes on tour to get to see it.

Was it worth the wait? Yeah it was. 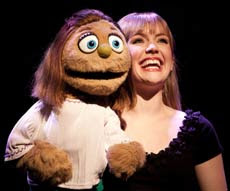 What really entertained was how clear it was that so many in the audience already knew and loved the show. Plenty of young faces too which make a change in the Theatre. Despite one unavoidable point of cast and audience corpsing (dude, that was one helluva laugh) it went really well and smoothly in terms of the production and kudos to all for the puppetry. Very enjoyable. And great music too.

And with a somewhat happy-ish ending, it was actually a rather life-affirming experience despite the dark wrongness of the topics!

Given my eclectic tastes finding a choice for this category is pretty darn hard to justify!

Posted by Lisa Rullsenberg at 1:17 pm No comments:

Hmmm... the soundtrack album to Les Miserables remains a favourite... I think I borrowed the double album original soundtrack from the library so many times they may have well as just given it to me to keep...


Update:
And for those who don't get this choice, it could have been Muse Knights of Cydonia...

30 day song challenge - day twelve: from a band I hate

I'm really not a fan of boybands, but somehow...

Take That - Back for Good. Video is bloody awful but there is a certain charm to the song...

Hmm... who are my favourite band today?

It was always gonna be...

Especially this version (from Jools Holland in 1995) quite possibly the most brilliant moment of their appearances on JH.
Posted by Lisa Rullsenberg at 12:25 pm No comments:

Crikey - a snooze song? Something gentle perhaps? Something relaxing?

Possibly something classical or film score... something soothing?

Posted by Lisa Rullsenberg at 1:19 pm No comments:

30 day song challenge - day nine: song you can dance to

Oh... anything upbeat by Bellowhead would do the trick for me --- I can bounce up and down and jig frantically to their stuff!

Posted by Lisa Rullsenberg at 12:50 pm No comments:

30 day song challenge - day eight: song you know all the words to

Oh my ---- this is REALLY tricky, not least because since a very early age I have frequently made it my mission to learn song lyrics. My friend Vicki and I used to be able to buy an Abba album and pride ourselves on having learnt all the lyrics and harmonys within 2 days.

Still, I'm going with this one because I so fondly remember learning the lyrics to it

The Whole of the Moon - The Waterboys
Posted by Lisa Rullsenberg at 1:47 pm No comments:

30 day song challenge - day seven: a song that reminds you of a certain event

A certain day in September...

Sadly no video for the song I really wanted here --- Einsturzende Neubauten's Salamandrina though there are a couple of non-embeddable versions... 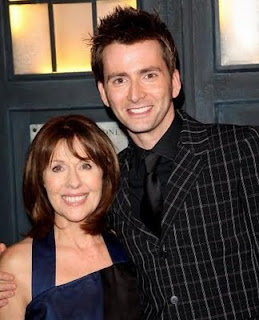 Guess we all had a bit of a tear at hearing the death of Lis Sladen...

Sarah Jane Smith will live on in our hearts, as will the Brigadier... man: what a sad year for Doctor Who fans...


I grew up on Lis Sladen and Doctor Who: seeing her triumphant return in School Reunion and then in the Sarah Jane Adventures was just a delight. Her ageless beauty took us all back to our childhood with her and made it feel as if we too could make time our friend. Proof - if anyone needed it - that the real world will always catch up with us.

Thoughts to all her family, friends and fans, who will feel her loss sharply.
Posted by Lisa Rullsenberg at 7:53 am 2 comments:

To remind me of somewhere, a track needs a sense of place for me.

And New York is perfectly encapsulated by these two tunes. Sorry - could not choose between them!

30 day song challenge - day five: Reminds me of Someone

This track reminds me of several people actually... and I LOVE the video. The Killers, Mr Brightside still makes me tingle

Posted by Lisa Rullsenberg at 1:24 pm No comments:

For tear factors ---- well, Squeeze and Labelled with Love STILL does it for me...

Posted by Lisa Rullsenberg at 1:51 pm No comments:

For sheer smile factor, I'm going today with The Decemberists The Sporting Life --- because it is genuinely funny.

Sadly no proper video, but the song is hilarious...

Posted by Lisa Rullsenberg at 1:48 pm No comments:

Crikey - there is a lot of scope for citing stuff that generically comes up on such lists ---- cheesy pop, novelty records etc.

But for sheer irritation, I think it has to be My Doorbell by The White Stripes which has really wound me up on several occasions. A shame as I rather like the band....

Posted by Lisa Rullsenberg at 1:30 pm No comments:

Oh man - it's gonna have to be A favourite song from this minute, since 'my favourite song' of ALL TIME would be a nigh impossible task otherwise.

Full length version of Common People by Pulp. Preferably the live version from Glastonbury 1995 because it holds so many memories.

Posted by Lisa Rullsenberg at 1:24 pm No comments:

Desert Island Discs has released its searchable archive: now you too can match who would choose the same tracks as you...

Remember Rullsenberg's Desert Island Disc list? I think I'd still stick to this as reflecting memorable tracks for me, despite other favourites looming...


Funnily, a song about suicide [Blue Oyster Cult's (Don't Fear) The Reaper], Squeeze's Labelled with Love, Echo and the Bunnymen's Never Stop, The Smiths' Ask, and The Wedding Present's Kennedy don't get a look-in.

Though other songs by Squeeze and The Smiths DO get a mention!
Posted by Lisa Rullsenberg at 10:48 am No comments:

Betrayal at the Comedy Theatre ----

(going into 2012)
RSC Measure for Measure

There is clearly a conspiracy of theatre ticket bankruptcy...
Posted by Lisa Rullsenberg at 9:47 am No comments:

Erm.... remember me? I used to blog here. I had such hopes for the year as well....
Posted by Lisa Rullsenberg at 9:25 am No comments: