The TARDIS here in New Zealand?! 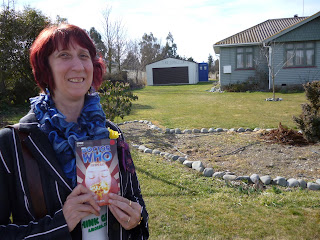 All courtesy of the entrepreneurial spirit of New Zealand as one man turns his shed into a weekend nostalgia museum. Enter through the TARDIS. 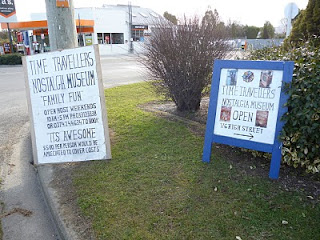 And when the museum is open, his home made dalek stalks the lawn! 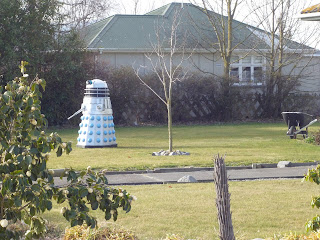 Posted by Lisa Rullsenberg at 8:39 am 2 comments:

It's weird given that in the UK the roads and planting are at best done last, if not constituting an entirely accidental afterthought.

In New Zealand, landscaping, roads, pathways etc are usually done first: hence why on some estates you get the grand entrance way built to an estate which never actually comes to fruitition. 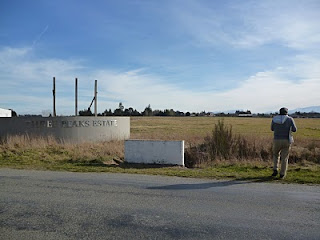 Anyway, some estates DO start to come to life: I hope Pegasus is one, as they confidently proclaim that there will be a town centre coming soon! 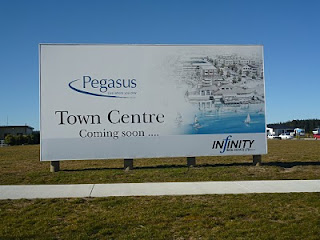 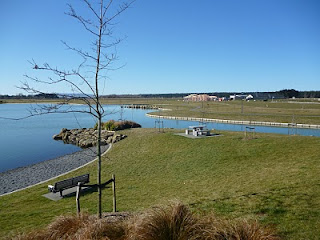 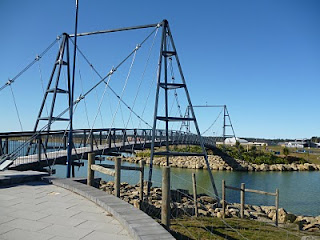 One of the selling points of Pegasus is its proximity to the nearby beach - a spooky short drive from the centre of the new estate through wooded dirt tracks.

But the view when you arrive is lovely. 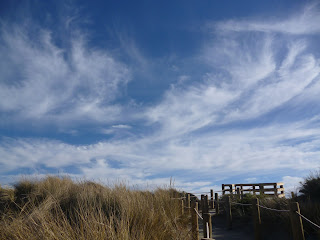 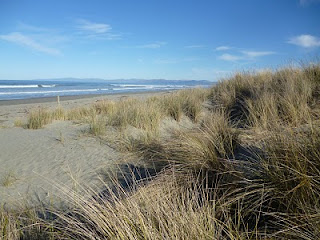 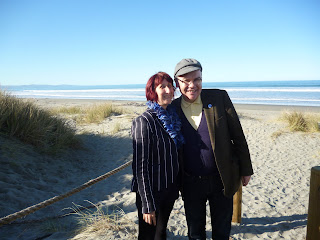 Posted by Lisa Rullsenberg at 8:29 am 2 comments:

Torchwood and Doctor Who

Critical faculty hats off everybody: Rullsenberg tackles the difficult questions of whether Torchwood was worth watching and whether Doctor Who still has IT.

Didn't you spot the 'switch off your critical faculties' line?

What can I say that hasn't already been written? In an age where the internet - especially Twitter and Facebook - mean that every faultline, every contradiction, every incoherant plot thread and every bit of over-emotional music scoring can be dissected within seconds of airing, to the world even before they've had chance to watch themselves... how can it even be possible to comment after the event?

But the point is that all that 'noise', the immediacy of comment, doesn't necessarily make for considered opinion. Not as I am promising considered opinion, but in these fast-moving times I suspect that even something written around 12 hours after the end of the UK screening of Torchwood, and at the mid-point of the second run of episodes for Season 6/Fnarg-plus-one-point-five/32-ish of Doctor Who will appear 'thoughtful'.

For what it's worth then, here are my thoughts (you'd be silly not to anticipate some spoilery remarks:

Torchwood
Well it was bonkers wasn't it? It certainly wasn't up there with Children of Earth level creepiness or emotional wrenching, but neither did it hit the (nevertheless entertainingly awful) lows of some of the episodes of S1 and S2. There were moments when the American-ness of the series threatened to overwhelm everything and turn it into 24, and I could have done without some of the awful "here-are-the-differences-between-the-American-and-English-language" puns, riffs and 'explanations'. But then it worked out more of what it wanted to do and there were some brilliantly unsettling aspects to the story. I was glad that we caught episode five before we travelled (as I would have been really cross to not have the horrors that presented to depart on) and there was something wonderful about squashing in four episodes to a couple of days on our return ensuring we were primed for the finale in tandem with the rest of the UK.

Am I 'pleased' with the ending? Not yet sure. It made no sense at all, but hey: it's Torchwood (kinda like Chinatown but less well written). I liked that it killed Vera off and let Kitzinger survive, and felt utterly baffled that there wasn't more general social chaos post-miracle given that effectively the world had been governed by people prepared to decide who lived and who died (and burning their inconvenient asses in the process). But you know what, I was glad to have it around and it sure beat lots of the other stuff on TV (esp as we don't have access to US TV generally nor most of the cable channels in the UK). A solid 7.5 overall I'd figure (with Children of Earth hitting a good full point or more higher).

Best episodes: The New World, The Categories of Life, Immortal Sins, and (just for sheer bravado nonsense) the finale The Blood Line.


Doctor Who
Three to go. I had to catch up on Let's Kill Hitler once we returned from our travels, thus getting a little out of step with the series as we had caught Fear Him (sic: thanks be to Rob) whilst over in the USA. Hence The Girl Who Waited was my first ep watched in company 'real-time' back on home soil.

Is the series of 2011 as strong as the 2010 one? Not sure. In some ways its better - much more consistent and hey, I like dark (even kids-TV dark). For all the failings others spotted, I've largely loved it --- Pirates! 'Gangers! bonkers eye-patch cobblers! enough wibbly-wobbly-timey-wimey stuff to make your eyes bleed!

Seriously though, I haven't felt the disengagement that others have; I've enjoyed the emotional manipulation of old Amy/young Amy (and younger Amy - ah, Amelia Pond, we're ALWAYS happy to see you, even if you are a projection); I've enjoyed seeing Rory become less of a cipher and Matt Smith is still proving to be every bit as good as the Doctor as we wanted him to be from first seeing him in The Eleventh Hour. Are there still unanswered questions? Of course - and I'm not sure I will want or like all the answers to them (not least the 'absolutely killed him' issue of astronaut Melody and the Doctor).

But I'm fully signed up for the ride, and as long as they keep using my old furniture as props (seriously: that wardrobe in Night Terrors had clearly meandered from Nottingham to Cardiff via the charity shop we passed it to), then I will remain happy.
Posted by Lisa Rullsenberg at 12:58 pm 1 comment:

In the run up to our journey to NZ, Christchurch had a real blast of winter. Indeed, the Thursday we flew out of the UK (off to sunny 30 degrees in Los Angeles), Neil's mum was only just getting dug out of the snow drifts at her home.

Southern hemisphere you see --- their winter. So we could have been really caught out - stuck and unable to reach the family.

As it was, it perfect timing, the sun came out. This meant there was snow on the mountains still, but our level was just beautiful. 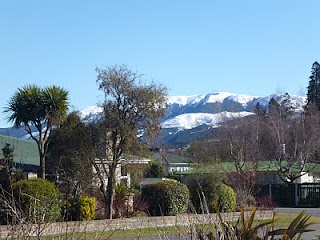 One thing that I do indulge in over in NZ is coffee: I don't drink much coffee here (I'm a tea-belly if anything) but they do make a real effort with the presentation of coffee in New Zealand. Witness this cappuccino from Seagars in Oxford, NZ. 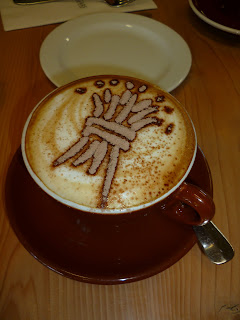 Indeed, food standards generally are pretty hot in NZ: see these lovely desserts, also from Seagars. (Apart from the fruit I swear everything was made with maximum attention to calories...) 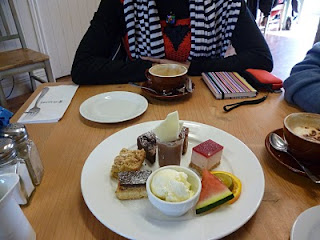 We also had some spiffy food at Route 72 and at Pukeko Junction, near Amberley and Leithfield, NZ. 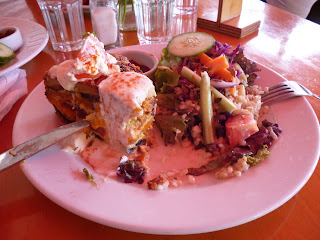 (Sorry about the lighting but the Pukeko salad and frittata was too lovely to not photograph - even if the lighting came out weird).
Posted by Lisa Rullsenberg at 8:18 am No comments:

San Francisco non-activity (aka what Neil did not do)

Neil and I could not resist photographing the sign but... no - he didn't.
Posted by Lisa Rullsenberg at 8:53 am No comments: 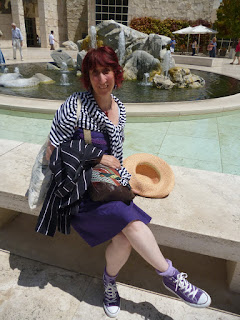 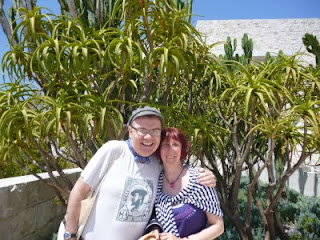 We had a blast last time we went to the Getty, but the journey there was a tad traumatic. Working out we could go via Santa Monica, and then through Brentwood up to the Getty was a great treat and much less hassle. And - befitting a sunny summer day - we had a glorious time again. 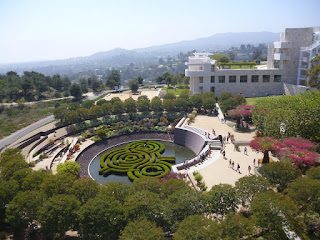 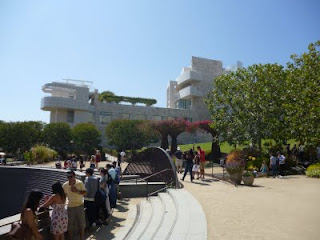 There is something exquisite about the light and colour of the place. Here's a short video of the visit. If you can get through my 'peg-on-nose' nasal tones and talking with Neil, there's a good of-the-period joke about Nick Clegg (see here for details). 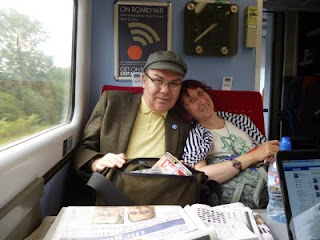 Neil and Rullsenberg on the train to London - ready for the big adventure! It has to be admitted that as our tube later in the journey passed by Earl's Court, Neil did teasingly suggest we make another visit to the Doctor Who Experience... We were tempted but... 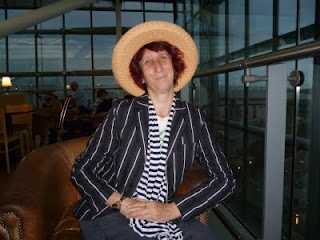 Rullsenberg at Heathrow T5 at ungodly o'clock ahead of our flight. Very relieved that I had surrendered the (nevertheless would have been delightful) pleasure of seeing Much Ado for a third time the evening before. Heaven knows how little sleep I would have had. 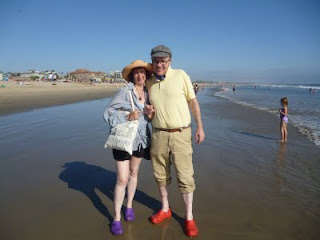 Still: all worthwhile to arrive in LA and immediately hop on the Big Blue Bus to Santa Monica and have a paddle!
Posted by Lisa Rullsenberg at 1:12 pm 1 comment:

And now I'm back from Time Travelling and Globe Trotting

I'm a bit zoinked from travelling but I'll be back with news and reviews of our travels over the coming days.