Apologies and something sweet

Then Sherlock took over.

And there was Richard II at the Barbican (along with a backstage tour and a gloriously unexpected if fleeting collision with a certain cast member and his plaited hair on the stairwell).

And then there is life, and work, and choir, and all the usual.

So as recompense, here is a sweet video from The Big Bang Theory.  I know it's a bit love/hate for people, but we're rather fond in our house and this is a bit lovely.

Will try and do better...
Posted by Lisa Rullsenberg at 1:54 pm 5 comments: 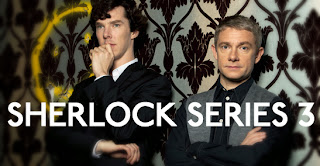 They sure know how to make us wait.  After Sherlock series one positively snuck onto the radar in summer 2010 leaving everyone breathless in front of Moriarty in the swimming pool (no, not for those reasons fan-ficcers), it took til January 2012 before it came back and brought us Irene Adler and THAT FALL (not the one Eddie Mair so wittily tormented us about on Thursday*), and then they made us wait another two years till New Year's Day 2014 for some kind of resolution.

Worth the wait?  Hell yeah.  It was worth anxiously waiting for the screening dates for both the USA and UK (oh the uproar that the USA might get the show before the UK, or even that they should know their own screening dates before the UK did).  But oh wasn't it glorious when we saw the hearse announcing 1 January as the (predictable, but til then unrevealed) screening date for the start of season 3**. 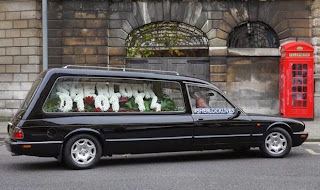 The opening three minutes of 'The Empty Hearse' alone are worth watching (though you'd be deeply confused if you stopped there), not least because whilst those opening minutes draw on the mini-episode prequel - Many Happy Returns - you don't have to have watched the prequel to get the episode.


OBVIOUSLY, beyond this point, here lay SPOILERS.... (though I will try and keep to a minimum)

Anyway: back to the opening minutes: throwing a curveball to the audience and we lapped it up.  The improbable yet daringly plausible, fan-pleasing, DerrenBrown-organised explanation for how Sherlock fell to his death and survived was breathtaking in its audacity and fan-poking.  It led into an 85 minute romp that rather felt like a trope-a-thon of fan-fic that Mark Gatiss couldn't resist clocking up:

It was some of the little details that were amongst the most pleasing: Cloud was most delighted with the step-down of the quality of eatery as Watson lost his temper with the re-emergent Holmes.  The dinner starts, with Watson's plan to get engaged to Mary***, at a high-end waiters-in-tails restaurant; after Watson attempts to beat and strangle Holmes the setting drops to a moderate Mediterranean-style restaurant; and following further violence, culminates in even being thrown out of a kebab take-away caff after a nutting.

It was hard to not also love the appearance of ma and pa Cumberbatch (Wanda Ventham and Timothy Carlton) as the Holmes' boys parents.  This also provided a nice touch and a glaring reminder to the cross-over Doctor Who fanbase that ma C was in stories across the first three decades of the show's history.

As for the 'threat', the crime of the narrative, well it was as disposable as it needed to be.  Almost a Maguffin. And whilst the bonfire rescue was tense, we knew (surely we knew) there would be no demise.  Didn't we? Could we be so sure in the wake of the fall from the roof, those final seconds of season 2, that had thrown us all into a tailspin?

Amidst such fan-pleasing pleasures, it would be easy to lose sight of the fact that this is a drama, written, directed, filmed and acted by some very brilliant people.  Freeman especially continues to impress as Watson, who can swallow silently, hard and conveying a variety of emotions without saying anything.

Ultimately it was a confection of delights, a go-with-the-ride immersion in London and Sherlockology.  Welcome home Holmes.  We have missed you.


* Dry Mr Mair did his usual trick of tantilising the listeners to Radio 4 PM with the idea that he'd "reveal the truth about 'that fall' on New's Year's Day", only to play the clip of Nigel Pargetter falling from the roof in The Archers.  "The truth?  He died."

** It was an accident of circumstance (not planning) that we happened to be in London on the day that fans had been advised we should 'keep a look-out in and around the centre of London'.  It took me a few seconds at the crossing by Big Ben/Palace of Westminster as a car approached the junction to process that it was a hearse - and then as it passed..."OH MY GOD, it's the Sherlock Hearse!!!!  1 January 2014!!!! YAY!!!!!!"  I may have been a bit excited.

The Vault: Doctor Who book review

It is pretty beautiful it has to be said.  I had been picking this up and considering it since it was released and resisted admirably.

Very glad I did, as it turned up as a very delightful Christmas present and as soon as I picked it up - wrapped - I felt the heft, the shape, and just KNEW what it was even before opening it!

The Vault is like a treasure trove of Doctor Who memorabilia and objects from the show's history up to date.  The images capture scripts, memos, toys, props, clothes, stills, designs... everything you could want to peek at and more.

The SFX review has very nice images illustrating sample pages but the glossy gorgeousness can't really be stated - it has to be experienced. 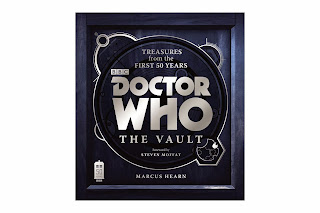 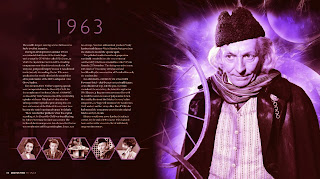 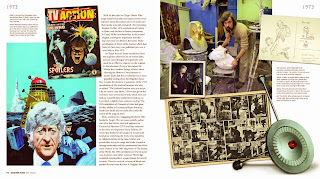 I'd like to visit the Doctor Who Museum though...

Posted by Lisa Rullsenberg at 8:51 am 9 comments:

A song for the day - Meditative Music


How apt that there should be a meditative journey to illustrate this meditative song - Micah P Hinson's "The Day Texas Sank to the Bottom of the Sea".  A soaring organ this time rather than strings, but the same effect.
Posted by Lisa Rullsenberg at 1:27 pm 1 comment:

Tonight I shall be mostly watching...

Posted by Lisa Rullsenberg at 3:40 pm No comments: