This time, we took Helen Lisette with us to Cromford and Scarthin. Another gloriously sunny day in the Derbyshire dales and Mill country, and it didn't cost her to join us (as the train fare was just £16.05 for the three of us on a group ticket). Huzzah!

Once again, we were warmly welcomed and granted lots of 'good customer' vouchers for our expenditure!

Here is a video about Scarthin which shows some of its charms.

Book acquisitions
I devoured the beauty of the book on Shoes in a single sitting. Mmmm: shoes.... I've also just realised where I knew the name of Patrick Ness: several years ago I borrowed The Crash of Hennington, a book about a town invaded by rhinos - it was odd and rather wonderful. I'm looking forward to reading the two books by him even more now.
Posted by Lisa Rullsenberg at 9:57 am 3 comments:

Living on: The New Zealand Earthquake one year on - it isn't over yet

Auckland and the North Island of New Zealand may think it's time to memorialise and move on, but for those in and around Christchurch, Canterbury on South Island, the death and destruction of 22 February 2011 is still being felt in regular aftershocks.

Many of these 'aftershocks' are sufficiently large to terrify those of us fortunate enough to live without the imminent threat of liquefaction and worse.

In much the way that all such significant events become subject to media over-presentation (but for a limited time only), NZ television is currently experiencing a schedule-filling 'analysis' of the earthquake and those who were killed. Problem is that the knock-on effect of the February 2011 quake has not stopped and will not have stopped when the cameras, documentaries and news crews disappear back to Auckland.

Yesterday was 'an art day'. Neil and I took in two exhibitions (well, sort-off three: but the Nottingham Contemporary Gallery almost always double-banks its exhibitions with some 'tenuous' link).

To start with it was super-rainy. The excuse of staying for coffee at the Nottingham Art Exchange in Hyson Green (my old childhood stomping ground) was mostly on the grounds that outside was torrential rain. Besides, they do nice coffee and the space is always inviting to sit in.

Anyway, we needed time to digest the beauty of the exhibition we had just seen there: Rashid Rana's incredible and breathtaking "Everything is Happening at Once" (1).

It is a brilliant, disturbing and visually entrancing exhibition, with works predominantly constructed from multiple small images: sometimes these are at odds with their apparent content, other times the large is constructed from the small. 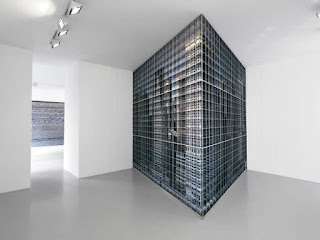 The thing is that photographs can never do justice to this type of work, not least because they can never capture the physical experience of standing in front of them, moving around - close, further away - that brings the images in and out of focus, alerting the viewer to the construction of imagery and the undermining of meaning.

For those worried that this is sounds rather like giant optical illusions, somewhat akin to those immensely irritating early 1990s Magic Eye 3-D images (2), be not afraid. These are so much more rewarding. The reflective surfaces of 'Desperately seeking paradise II" (2010-11) that greet the visitor as they enter the central gallery, start to turn into an image, and at close proximity you realise the tiny images at the heart of the whole: small photographs of housing in Lahore. As you step further and further away from the entrance, the reflective surfaces disappear completely and the overpowering obsessive detail in each small photograph is taken over by the realisation that the whole is even greater than the sum of its parts: a immense skyline of skyscrapers - at odds with the small domesticity of low-level housing in the individual pictures. 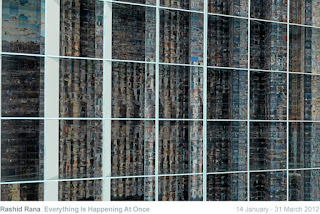 Another work, 'Dis-location I' (2007) is constructed from around 45000 individual pictures taken of the same building over 24 hours, to make a whole image of that building, a colonial building: sometimes people intrude to the left, right and centre of the individual frames, but the building - solid, non-transitory - appears static in the bigger picture. The flux of time and space: I cannot think why this exhibition appealed to me.

Upstairs, there are warnings about "imagery of an adult nature": the series 'What Lies Between Flesh and Blood' presents Rothko-esque images constructed of images of 'flesh' and 'blood' garnered from multiple sources. But these lead into more discomforting images. 'Red Carpet' (2007) creates the sumptuous qualities of a fine Persian carpet from multiple images of a slaughter-house. At close range, the spatter of blood is disconcerting: at even a couple of feet away, such details of 'reality' are lost to the overall pattern.

I suspect though that Veil VI is the real reason for the warnings: a row of women dressed in full-veil clothing, barely individuated in their similarity, is made up from their equally un-individuated Western counterparts from Pr0nographic imagery. It is simultaneously simple (simplistic) and disturbing. Again, the disjunction of part and whole - East and West - are blurred and critiqued.

After that, Nottingham Contemporary had a tough job to pull off a comparable reaction from me. And although it had elements of the fascinating, nothing quite touched me in the same way.

As is common with Nottingham Contemporary, the space often brings together two artists/collectives/themes. In this case, it is architecture. Thomas Demand discovered the archive of John Lautner at the Getty Research Institute, Los Angeles. 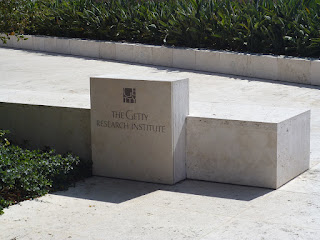 (Sorry: cannot help myself - BEEN THERE!)
Ahem.

Anyway. Demand usually creates his own models of architectural space, but destroys them once they are photographed. Here (thankfully) the urge to destroy is resisted, but Demand lends to his often super-close-up images of Lautner's modernist architectural models a sense of capturing an entire history of both modernism and architectural form. There is a weird beauty to it, but the images appear a little 'dead' after a while amidst them, in a way one hopes a visitor does not feel in Lautner's own spaces. 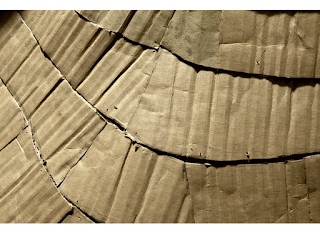 The other 'half' of the exhibition is both more explicitly architectural and yet more divorced from the reality of architecture.

Decolonizing Architecture/Art Residency (DAAR) is an art and architecture collective set up by Alessandro Petti, Sandi Hilal and Eyal Weizman, based in Palestine. Through videos, proposed architectural interventions, explorations of contested spaces and buildings (crucially the ill-fated and ill-located Palestinian Parliament), DAAR challenge the dispassionate modernism of Lautner and Demand to highlight how space and the buildings that occupy it, the lines that draw it, and the laws that enable it are sites of more than just creative practice. 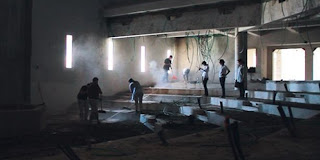 It is intellectually interesting, but I felt rather like I have in the past when viewing Martha Rosler's work: it stimulates my brain, my politics and my sensibilities, but I don't necessarily feel creatively connected to it. I think this may be my flaw.

So it was very much an art day, even though the experiences seemed to move further away from an integration of creativity in the world to an analysis of the difficulties of bringing the creative into a fragmented inhabited space in 'the real world'.

(1) Yes, my inner nerd alarm did go off as I thought about "all of history happening at once" in the Doctor Who season fnarg plus 1 finale "The Wedding of River Song".

(2) Irritating because I could NEVER 'see' diddly with these darned Magic Eye things and merely got irked by the hours wasted in pursuit of the un-seeable.
Posted by Lisa Rullsenberg at 2:54 pm 2 comments: