Very short snippet videos but at least they're up! Thanks to the person who shot these.

If you see a woman with red hair dancing near the front - that was me! 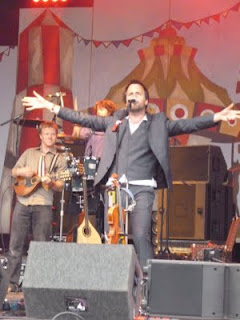 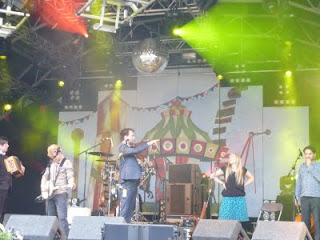 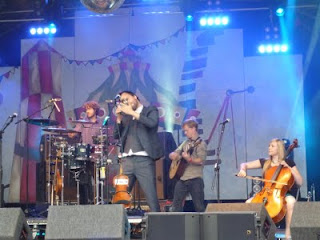 And here's my little video!

Over the course of our weekend at Summer Sundae there was a lot of music in passing, in the background, tasted and moving on. I'll deal with those first on each days list. Hopefully I will add links but if not, hey Google is a pretty good search engine! 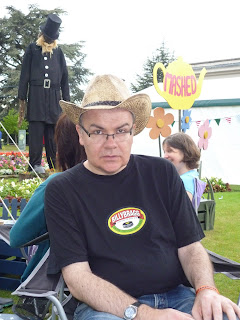 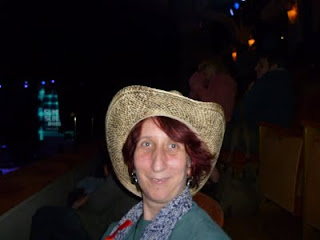 Friday
Passing stuff: Other Lives, Wolf People, By the Rivers, Givers, The Bees, Graham Coxon and The Maccabees.

Portico Quartet - The highlight of Friday for sure: just brilliant musicianship.

Toots and the Maytals - Packed the Indoor stage at De Montford. Really got the place excited.

Missed:
Shonen Knife - yeah, I KNOW, I KNOW... but they clashed with Portico and it was a tough call. I need Hermione's hour glass thing.

Saturday
Passing stuff: The Rasoodocks, I am in Love, Showaddywaddy (yes, they are warbling away), We Three and the Death Rattle (though we did see most of their set), The Jim Jones Revue (yeah, again, sorry, but the acoustics did nothing for them), Little Comets (fair portion of their set), Reef (hard to miss 'Place Your Hands'), Dizreali and the Small Gods (didn't catch enough of them but they were great and worth buying their self-produced CD), Teddy Thompson, comedy from Rob Rouse, bit of Newton Faulkner.

Galli Galli Theatre @ Curiosity Corner - a Victorian Melodrama called "Fretting Fanny's Forlorn Forage for Friendly Fumblings". The title should tell you everything about how mad this was! 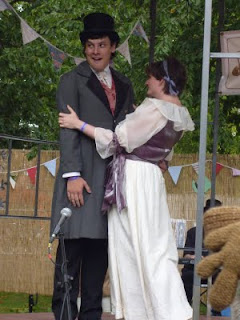 Beth Jeans Houghton (and the Hooves of Destiny) - her hair alone is worth watching! Despite some technical problems (a broken string!) they were suitably off-beat and with heavy cursing lyrics too.

Bellowhead!!!!! (see separate post) - Well - I had a VERY good time (and probably lost half a stone in sweat dancing!)

Pete and the Pirates - Bloody excellent. First heard the song 'Half Moon Street' when the lead singer did it with his side band Tap Tap, but the song is just AWESOME and I really like their style and lyrics. Even Neil was won over as they did a storming set in the Rising stage. 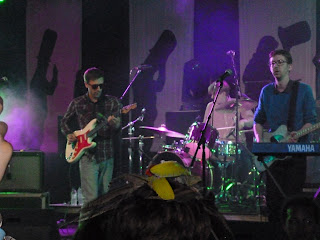 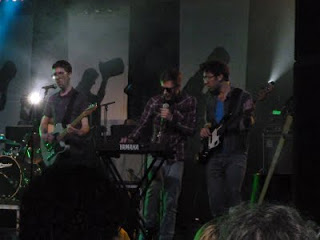 I Am Kloot - Sadly no where near as well attended as it could have been, they were nevertheless wonderful to see. Opening with their own special 'The Sky at Night' intro from Sir Patrick Moore, Singer, they were lushly lovely. Drink-inspired and self-reflective analysis of life and love ("and disaster"). John Bramwell was on fine vocal form - and it was nice to catch his warm up vocalising, letting his natural crooner style find voice with the likes of 'Fly Me to the Moon'. Opening with 'Northern Skies' was delicious... 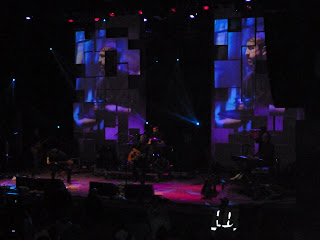 More passing stuff (Sunday)....Dark Dark Horse (dull), The Swines, The Antlers (rubbish), The Black Atlantic (sorry I missed most of them - they sounded pretty damn good actually - see video below)

Saw:
Harp for Hangovers @ Curiosity Corner - gentle harp based versions of Blur (The Universal), Jefferson Airplane (Don't You Want Somebody to Love) and The Beatles (Come Together) etc. Very gentle!

The Leisure Society - wonderful as ever, if not getting the support they needed being placed on the Outdoor stage. I enjoyed them very much. 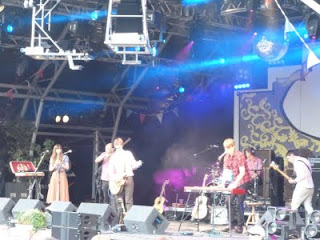 The Dead Victorians @ Curiosity Corner - mad music hall from four Victorian Gentlemen (of suitably varying heights. Eyebrow solos, tongue solos and madness ranging from 'The Pizza Song' to "If I can't have a proper cup of coffee from a proper copper coffee pot I'll have a cup of tea". Sadly, I knew all the words already. I had a very odd upbringing!

Dutch Uncles - bosting! Angular pop. Plus a fine version of Tears for Fears "Everybody Wants to Rule the World". Think a Sparks style of vocal but with more dancing. Quirky fun.

Warpaint - packed the Indoor stage out for quite a while. Much deserved Grrl guitar musicality and perfect harmonies. 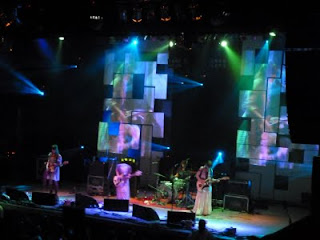 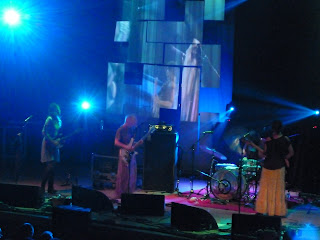 Example - we didn't intend to but with the sun going down, the crowd bouncing and a vibrant energy, we couldn't help but enjoy!

Missed: Everything, Everything. Wasn't quite in the mood for falsetto. Plus we ran away before McFly kicked off, and the collective squeals deafened everything in Leicester.

Posted by Lisa Rullsenberg at 5:15 pm No comments:

On Saturday, I wore stripey socks, a short dark blue dress and a red cardigan. 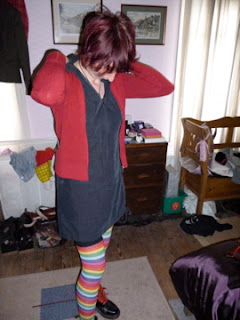 See: there I am in all my coloured stripe finery! (above) But as I had been to Jack Wills - oh I know I really shouldn't - and been tempted by another lovely blazer that Neil spotted for me (and it was in the sale), well ---- 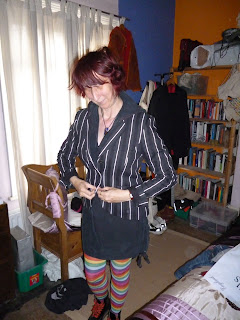 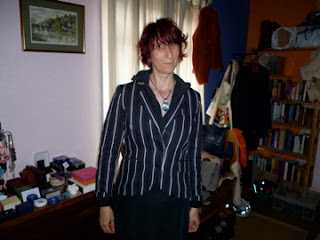 Oh it does feel a mighty fine jacket! And it seemed like a good time to try on my lovely shiny new Rocket Dog shooes (I've been after some Rocket Dog shoes for AGES!) 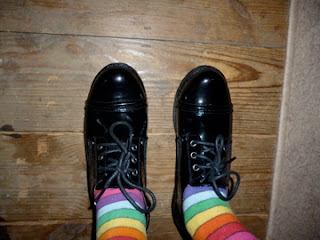 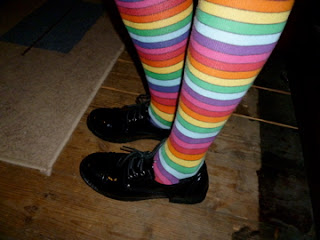 Posted by Lisa Rullsenberg at 7:36 am 4 comments: