On Friday, Cloud and I went to see the eight-piece Estonian Piano Orchestra, with guitarist Ain Varts and percussionist Hele-Riin Uib (sadly, composer Urmas Sisask, who was due to attend and play shaman drum was unable to travel to the UK).

WOW: what a venue (it's the building that the Guardian/Observer now live in) and WHAT an evening of virtuouso playing. Incredible sounds and visuals. Breathtaking experience.

These video clips give you a flavour.

The craft and the glory

Here are a couple of pictures of Rullsenberg and her handmade scarf. 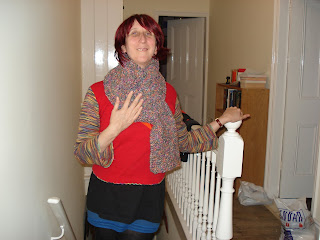 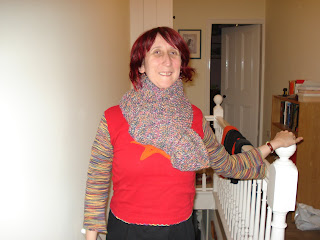 An alternative title for this post was "The needle and the scarf is done" but I decided against it.
Posted by Neil at 10:22 am 1 comment:

Just a quick one to say that despite the devastating earthquake hitting New Zealand last night, all the family are safe
Posted by Lisa Rullsenberg at 1:43 pm 2 comments:

We originally saw this production of the National Theatre's Hamlet (starring Rory Kinnear, Clare Higgins, Patrick Malahide and David Calder) via the NT Live! Broadcast to the Nottingham Broadway Cinema.

It was great, but it does highlight how seeing a LIVE production differs from watching a broadcast. Even more so than the Donmar's production of Lear, the NT's own broadcasts are rather more akin to filmic versions, complete with close-ups and controlled movement of individual players. This is no bad thing, but it does differ somewhat from seeing theatre --- something in the round with all the 'distractions' of having to choose where to look, of thinking where you focus is and what different people are doing on stage at any one time.

So in some ways I think I enjoyed seeing the proper live version even more than the broadcast one; as ever all praise to all involved for a very persuasive version of this well known text, proving (as ever) how it can be endlessly fresh.
Posted by Lisa Rullsenberg at 10:28 am No comments: 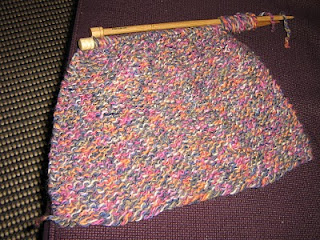 After the rather frustrating experience of a few weeks ago I was beginning to despair about knitting.

Never mind. With bigger needles and chunky wool (multicoloured!) I seem to have some mojo back --- I've even gone back to the small needles and wool again with some success.

Now I just need more of the funky wool and I can carry on with my plan to knit a scarf.

Yes, I'm sticking with the most basic of knitting actions (have not yet reached the point where I can purl either) but I'll be happy with that at present.
Posted by Lisa Rullsenberg at 8:17 am 2 comments:

And the fees race is on... The future of Higher Education in the UK

So, Cambridge University jumps first in stating ALL courses will set fees of £9000 per year (that's approx. 14,500 US Dollars)*.

I can't imagine the Universities who believe themselves to be 'high status' will be far behind (indeed, Oxford has made similar noises).

The logic behind charging the top amount that will be allowed by the new government-set maximum fee?

An internal report seen by the BBC News website argues that to charge any less than the maximum would be "fiscally irresponsible" and would raise doubts about the university's "commitment to excellence".

Oh well, that makes it alright then. As Cloud said last night, "It's the same logic that banks use to justify bonuses: it's the only way to ensure we get the best." Well quite.

Our response to the Oxbridge logic = cobblers.

So much for the Parliamentary idea that "fees of £9,000 will be allowed only in 'exceptional circumstances'" (as said by David Willetts. universities minister) . Watch the Russell Group et al leap to match the Oxbridge stance.

Thing is, it isn't as straightforward as saying that poorer students will be put off going to University (or even from applying to 'good' universities - good for what? good how?). I don't doubt some will be - much as at the moment. Rather, as has been the case since the Higher Education system became something explicitly paid for by students (whether during or after graduation), there will be an increased expectation that - whatever the course - the product (the degree) will be expected to be awarded. And nothing less than a 2:1 will do. The product purchased by all those fees isn't 'an education' but the final classification of degree: as one student said recently to a tutor "I only got a 2:2 mark - what are you going to do about it?"

I don't believe that better teaching cannot be delivered to enable students to do as well as they are able, but this idea that the effort to improve should come entirely from the tutor is surely unsustainable and will lead to a devalued degree system and marking. How will external moderation of marking work effectively? The two-tier nature of higher education has never gone away, but these fee changes will surely reinforce it --- and not in a good way.

I feel pretty miserable about the future of Higher Education in the UK** I wish I didn't, but I do.

* Yes, I know many US Universities and colleges offering higher education qualifications charge this and more.

** Actually, education full-stop isn't looking healthy at present. The whole thing has lurched from reinvention to reinvention since the early 1980s and not much has made the situation better (or at least is still going to survive the cuts of the current government...)
Posted by Lisa Rullsenberg at 8:27 am 3 comments:

In Praise of.... Being Human

Spoilers, OBVIOUSLY, since there's a Season 3 episode 3 snippets clip embedded here, but I could not resist.

Awh, that was pretty great. Though how the "best bits" or "highlights" could exclude the CLASSIC "Oh My God, we're TWELVE" exchange between George and Mitchell is beyond comprehension! I know it's an oft-used concept (here we go again with the Buffyverse) but it was beautifully done.

At its best, Being Human is human and horrific in equal measure: glad it's back.
Posted by Lisa Rullsenberg at 5:50 pm 5 comments:

Ah, bliss. With The Killing, Being Human and now South Riding soon to come, things are proving good (if crowded) on the TV watching scene.

Posted by Lisa Rullsenberg at 7:16 pm No comments:

This was - I think - our third live theatre broadcast, but the first attempted from the Donmar Warehouse, that delightfully intimate London theatre space.

The current production of King Lear has been considerably acclaimed - then again, Lear very often is - and it was a real treat to be able to see this live broadcast as getting tickets to see this would have been nigh impossible.

Jacobi as the aged king is, probably unsurprising, utterly mesmerising. But there is scarcely a moment when you feel anyone is working at less than full quality. Paul Jesson as the Earl of Gloucester gave a wonderfully nuanced performance and both Alec Newman as the bastard Edmund and Gwilym Lee as the noble Edgar/Poor Tom were brilliant portrayals of the sons. You could tell Gina McKee was just loving playing the vile Goneril ("at last, a bitch!" she too often gets pegged in damaged but attempting to be saintly roles) and Justine Mitchell's Regan was truly horrific in her delighted violence towards Gloucester.

Michael Hadley is a fine and fiercely loyal Earl of Kent and Ron Cook is suitably revealing and entertaining as the Fool (a brief period of light in the darkness of this bleak play).

Any faults the production suffers are not its fault, but rather the plays own fault. Cordelia is so clearly a loving daughter - just not in the way her father unreasonably expects her to be - and is so saintly in her response to the situation that it is hard to feel more than pity for her plight. Pippa Bennett-Warner is a charming and responsive daughter but she is hampered by not being the core focus of Shakespeare's play. Moreover, it is always hard to read the extent to which Lear's madness is induced by the loss of his truest and much-loved daughter or is prefigured in the heartlessly cruel way he tests his daughters/subjects from the start.

I was wary of the almost blank canvas setting of the Donmar version - white-ish boards envelop the stage and the balconies. But with the sound effects it was remarkably effective and emotionally allowed space for the actors to act.

Only one aspect marred the evening: part way through the second half just as Lear emerges with his crown of grasses, the signal suddenly cut out to despairing cries from the Broadway cinema audience (and no doubt elsewhere too!). This initially led to sound but a jarred/pixilated image before suddenly we heard an announcement to the theatre audience (not us elsewhere) that "the satellite signal had gone down" so they would be restarting that Act/scene again. Cue groans from the theatre (and no doubt from the actors too!). It was a LONG 10 minutes or so, but once resumed all was well. Poor Michael Grandage must have been having kittens --- in the interview at the start with Emma Freud he'd said they were all nervous enough thanks.

All in all, a fabulous if exhausting night. It was a late finish and the play is gruelling enough without that. But I felt honoured to have been able to see such a magnificent production of this iconic play.

Did I say this was my first Lear?
Posted by Lisa Rullsenberg at 6:35 pm 1 comment: 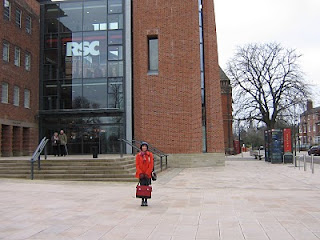 Awh, what a lovely weekend we had. 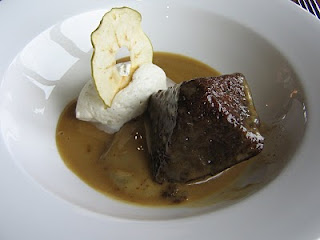 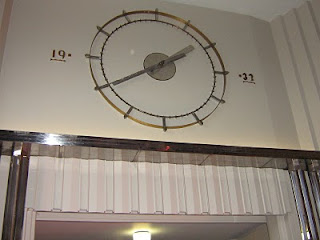 And all the best bits of the RSC old theatre are still there. 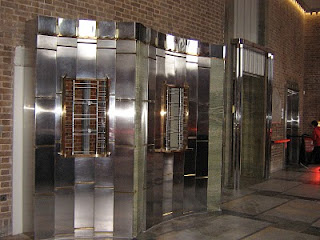 And the new theatre itself is looking good with all the best features from the Courtyard integrated in. 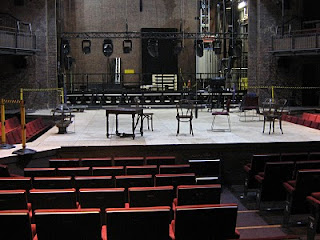 The fact that we had the chance to meet up with our lovely friends Michelle and Nicole (from THAT weekend in Stratford) was just perfect.
Posted by Lisa Rullsenberg at 8:15 am 1 comment:

Lots of things happening from this point on: went to Stratford at the weekend and collected tickets for there for the year and there's a lot happening locally too.

That's quite a lot going on (and MAAN obviously come as a recurring event). Haven't even booked for any gigs yet (and there are sure to be some) so this could get busier!
Posted by Lisa Rullsenberg at 1:03 pm 1 comment: