From London to LA: reflecting back to December 2012

By the time Neil and I hit Monday 17 December, things were already feeling pretty drained.  I'd had two bouts of ill health from end of October - this had totally thrown my work calendar as it affected three weeks of work.  Neil was then in hospital for problems with his eye in mid-November (forcing cancellation of our visit to see 55 Days together): he's thankfully recovered but it was both terrifying and exhausting for both of us.  I then promptly got one of the cough/cold bugs doing the rounds at work (great in the run-up to choir performances!) and, since Neil had a reduced immunity system, he got the cough off me.

And it wouldn't shift.

He coughed all the way to London.  Okay, so we could at least enjoy dinner at one of our favourite restaurants (Olivelli on Store Street)... 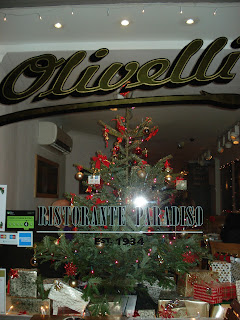 and then breakfast at Bar Bruno before heading to Heathrow but both of us were tired before we had even started the journey...

Hey ho: at least we could watch Headhunters on the plane.  And I indulged in Avengers Assemble again as well :)

It was a late night landing in LA so all we managed was to drag coughing Neil to the restaurant and have some exceptionally garlic-heavy angel-hair pasta.  I enjoyed it anyway.

A week ago we were just about to land at Heathrow

Today, snow. Last week was summer in New Zealand and the bustle of San Francisco! 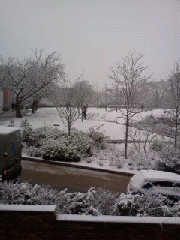