Reverse appearance of posts (apologies for that) but here are some more lovely pictures from our recent London trip July 30-August 4. 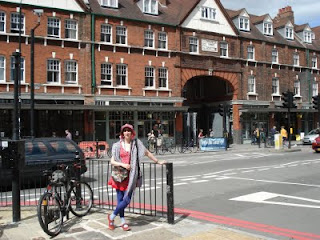 Me outside Spitalfields market near Hawksmoor's Christ Church. 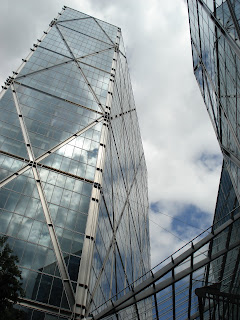 Architectural developments in the area around Liverpool Street Station. 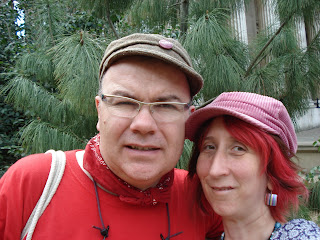 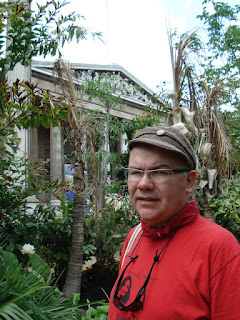 See what I mean?! 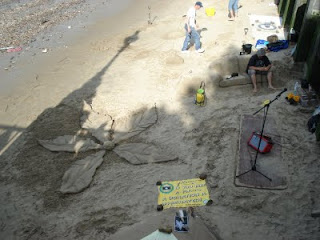 Watching the beach artists creating wonderful pictures and items was great fun: flowers, even a pair of dogs were created from the sand as the Thames tide was out. 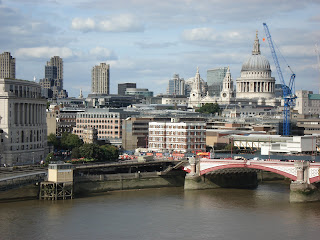 Amongst the many things we did that were new on this trip, one was to go up the Oxo Tower. This may be a public right of way but it's hardly that well known. But on a sunny summery evening the view is well worth the trip. 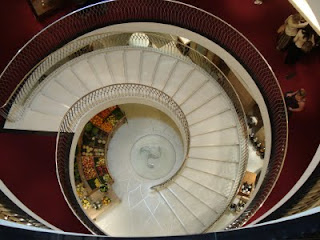 Fortnum and Mason's round stairwell is a beauteous thing to behold.
Posted by Lisa Rullsenberg at 5:37 pm

Will think of the OXO Tower on my next trip Londonwards. Thanks. Went up the top of St Paul's when you could and the views are fab.

We walked past the sand sculptors the other day, but they weren't doing anything very exciting. Still can't get my head round the sight of sand on the scummy Thames, but there you are. Next time we go I might send Spouse and the children down to create one of their magnificent sand dragons and see how much attention we get!

Jane Henry said...
This comment has been removed by the author.
8:41 am

Sorry don't why my comment came through twice, so I deleted it.