I keep forgetting to make sure that múm is lower-case and with the accent [mother, I still love you, but this isn't a pean to your quirky music].

Anyway múm are an Icelandic combo -- see, you're already interested aren't you?! -- who specialise in electronic sounds, accompanied by strings, horns and a variety of odd intruments (recorders are not your average band's choice...).

Though the personnel has changed a few times, they continue to produce delightfully mystical, ethereal melodies and hypnotic beats. George was keen to be near the front and, since he hadn't got his own camera with him, nudged for photographs of the two females fronting the band. 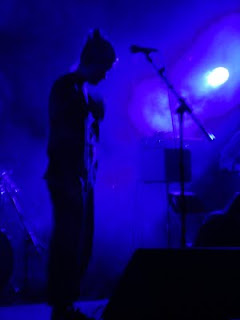 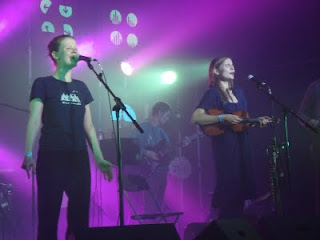 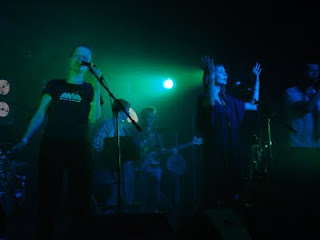 Brilliantly, as Summer Sundae was the only UK tour date for múm, this was included in some video footage in their video diary:

I have to say that seeing the band live was wonderful: I first really heard of the band via a great collection of Fat Cat records called Branches and Routes (which features some fabulous tracks and is heartily recommended as a taster). There is something special about them and the sounds they create and they're definitely worth seeing live.
Posted by Lisa Rullsenberg at 1:44 pm

Seeing them live without sound would still be swell!