NOTE: Updated with photos!!!
After leisurely croissants and crumpets (and coffee for the boys) we went to get the bus to town and then the train to Leicester for day two of Summer Sundae.

Mr Plow -- caught about half the set of this country-esque band. Fine stuff with a witty edge.

Frontiers -- Nottingham band, they were background to alcohol but okay. Didn't quite get where the Cure and Joy Division sound references were that the festival booklet promised but hey...

David Thomas Broughton -- definitely will get his own post!

Minaars -- Although mostly background to us lapping up the sun after seeing DTB, these were actually rather good.

The Yellow Moon Band -- with a psychedelic prog combination of drums, bass, guitar and electric acoustic guitar this rather traditional instrument mix nevertheless held considerable promise. Mostly instrumentals rather than 'songs' there was a nice sound to their work but something felt missing. If they could add something a little more unusual (not just bringing on a mandolin for a brief guitar-esque appearance) then this would have transcended the interesting and could have been marvellous. If they know any strings players or can recruit a pianist they would really go places.

Beth Jeans Houghton -- wearing big and I mean BIG blonde hair, BJH cut a distinctive figure in the Summer Sundae crowd. She may have had problems getting her (loaned) guitar to function without explosive crackling, but it was nice to see and hear her singing in the Phrased and Confused tent (this was after catching the end of Emma-Lee Moss of Emmy the Great talking about songwriting).

[Whilst I went to bag myself a space at the front of the Main Stage, Neil wandered off to see The Kabeedies, who I'd earlier caught doing their sound check. A bundle of jumpy teen bounce, Neil thought these were great.]

Broken Records -- after their glorious and uplifting appearance on the almost stupidly-too-small-for-their-numbers-stage at the Nottingham Bodega Social (supporting The Twilight Sad), it was nice to see Broken Records have more space, taking a place on the Main Stage. And it was great to hear their violin, cello, trumpet, keyboard, guitars and drums crescendos given space and air. 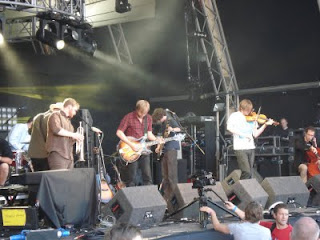 Having said that, bless 'em, their rather dark and bitter-sweet tones are perhaps not best suited to a sunny day open air slot (they noted this with irony for their 'sunny day tunes'). I had a blast singing loudly along to all the songs I knew the words of (most of the ones they played) but I suspect that it was a long drive back to Scotland in the clutch-less van taking back all 7 of the band.

Still to give you a sense of their live talent, check out this SongbyToad video for their excellent 'A Good Reason'.

Emmy the Great -- Emma-Lee Moss is lovely, a little gem of acerbic observation and narratives. Emmy the Great (the band) is... well, I actually think that she works better when the sound is more striped down. Given that her lyrics combined with the guitar and simple accompaniment produces a truer sound for her talent, it's almost a shame when the band kick off in full and her voice and wit are a little overwhelmed.

Canopies and Grapes
I wanna see you tonight
What's the point?
All we do is fight
I've loved you
So long
I don't know who I'd be without

I sit here drooling on my own again
and like a routine episode of Friends
What does it mean to be American?
Is it
feelings, coffee and
I'll be there for you?

Later on me and a bottle will hook up to have some fun
Then I'll call your house at twelve to let you know that I'm drunk
Say I'm sorry Mr C, I was just looking for your son
How are you, incidentally, do you know if he's out alone?
There is this book he lent to me something like seven months ago
I'm gonna burn it in the street be so kind as let him know
that I'm dealing
with this badly
and
could he please get back to me?

Since you've gone my only friends are Billy Bragg and the Jam
Though my time with you has got me feeling oh so k.d. lang
I think you're right about the New Kids on the Block
And I agree now Billy Joel does not rock
Wish I could tell you all the things that Woody Allen helps me see
How Annie Hall is starting to seem quite a lot like you and me
It took a while to come around to David Bowie's new CD
And it's much too late to give back your Magnetic Fields EP
Can I keep it
by my pillow?
Fucking loved it
How I long to tell you so

When I get to sleep I'll dream again of canopies and grapes
And wake shaking from the knowledge that the mattress holds your shape
I assume my phone is dead because it hasn't rung for months
If tomorrow is the funeral do you think that you could come?
I could give you back your music and your t-shirts and your socks
Walk to Jazz's house in SOHO cry into her letter box
Spend some time out to resuscitate my soul
Take up smoking and drink carrot juice and grow
Teach the mattress to expel you from its folds
Then dry my eyes and keep on walking til the motion makes me strong
Until one day i realise I don't remember that you're gone
We'll be strangers
who were lovers
I'll recover
It's so weird how time goes on

65 Days of Static -- We originally acquired the 65 Days of Static album 'The Fall of Math' from the mighty Selectadisc on the basis of a good sleeve note comment from the staff (the Selectadisc summary notes, like those of Rough Trade, are were a thing of wonder). Soundscape noise nevertheless beloved of Kerrang! Loud, thrashy and rather glorious.

St Etienne -- ah.... Sarah Cracknell and co. For boys (and frankly girls too) of a certain generation, St Etienne were the 'pop' act it was cool to like. And hawt dang if the lovely Sarah C isn't still as gorgeous as ever! With the audience in her hand, the divine SC and Debsey Wykes on backing vocals (I think it's her!)with masterminds Bob Stanley and Pete Wiggs kept us enchanted with both new and old songs. There was quite a crowd of very happy men going home that night at the flirty sight of her still strutting in her feather boa and tight fitted jacket. 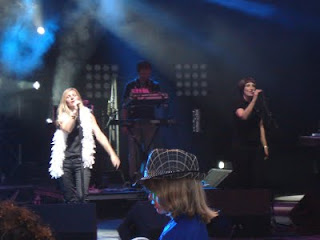 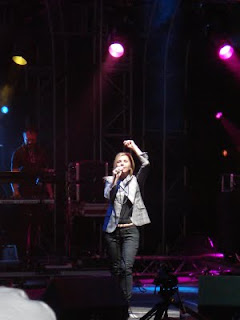 Frank Turner -- quite a contrast, but Frank Turner nicely rounded off Saturday with his Eton-boy turned Billy Bragg-esque social and personal commentary songs. The Rising Stage was packed out for this and I have to admit being surprised how well loved FT was with a mostly young crowd. Funny and sharp and left-ish inclined this cure as hell beat seeing The Charlatans drag out another faux Stolen Rones performance on the main stage.

As Mr Hudson (now minus the Library he had when he last appeared at Summer Sundae) was failing to get beyond the soundcheck (25 mins into his set-time) we exited the festival and headed home once more.
Posted by Lisa Rullsenberg at 8:42 pm