Food and drink and other Summer Sundae treats

Summer Sundae is a nice moderate sized festival: a bit too big to be truly boutique now (I would say) but then I am comparing it to the titchy-tiny T'IndieTracks.

Anyway, one of things I love about the festival is that it has a nice range of stalls and food available. This continued this year and we certainly enjoyed availing ourselves of the Summer Sundae Burritos, the Northfield Burgers (minus extra fly protein) and the real ales. 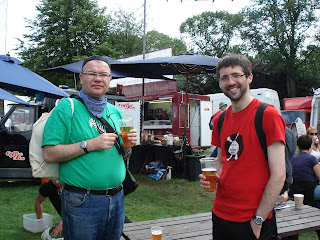 Having said that though, with the loss of 6Music as a main sponsor, it did seem that Summer Sundae had been forced to take on a bit more in the way of corporate sponsorship affecting their food/drink ranges.

Gone were the delightful made to order proper pizza oven pizzas, and in came Pizza Express: now I like PE, but even so the loss of the independent provider was annoying.

More annoying was the impact that Bulmers had. Now again, I like Bulmers cider ... (NO ICE THAT IS AN ABOMINATION! -- sorry, I've finished shouting now...)

... but I was bloody annoyed, furious in fact, to find that thanks to Bulmers sponsorship and huge stall the sweet little beer tent was no longer allowed to sell any other type of cider!

What??! You can't even let the beer tent sell Scrumpy Jack - which you make?! And also you're so scared your product won't sell that it can't cope with some competition from Westons???!

Meh. I was quite cross.

Not as you can tell. 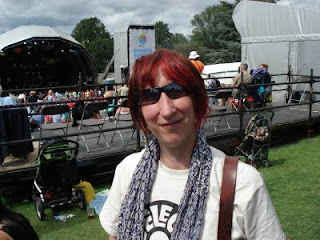 And the sun was shining much of the weekend. 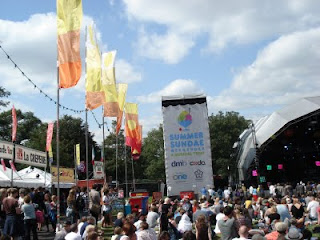 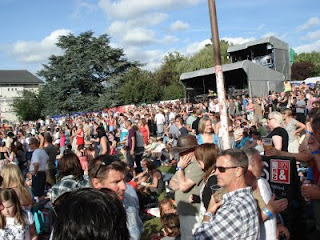 So it wasn't all bad.

Nevertheless, despite this corporatisation, there were some independent treats at Summer Sundae 2009: these included the wonderful performances put in at 'The Hurly Burly'.

It really is quite something to think through the ads for new staff with Hurly Burly:

"can you cook and serve food?"
"yes"
"can you also sing, dance, play a musical instrument and be prepared to mime along to songs to an audience?"
"...erm.... what kind of food do you serve again?!"

Seriously though, this lot were great. Not only was the food fab but they were also jolly entertaining. It certainly takes something to persuade hungry festival goers to delay their requests for food whilst you do a few tunes! 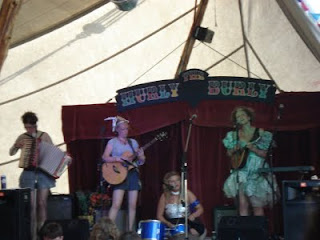 They also did a wonderful performance along with Talking Heads 'Once in a Lifetime' which not only had the women performing but also the guys from the kitchen at the back! Utterly mad but totally delightful. A festival treat to prove it wasn't all corporate.
Posted by Lisa Rullsenberg at 6:56 pm

Yes, ice in pints of cider - what is that all about?

I don't know but I want to do serious damage to the IDIOT who started promoting this idea of cider over ice. Why would you want to add water to a pint-drunk form of alcohol? (Spirits I get are a different case -- though in some parts of Nottingham I suspect they too are drunk by the pint!)

How did we *not* run into each other. Me and my pal were sitting in the Hurly Burly, minding our own business, when they broke into the 'Once in a Lifetime' routine all around us...

Thoroughly entertaining, if a little disconcerting over my quiet coffee!