Well, yes, so having joined BeVox earlier in the year, I thought I should keep my hand in with singing over the summer by volunteering for the 'scratch choir' at Summer Sundae. 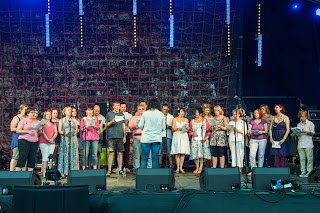 Summer Sundae started having a choir - put together from scratch with people attending the festival - a couple of years ago: I'd seen them in rehearsal and/or caught part of their performances and had a urge then but not the nerve.  This year I bit the bullet and joined!

So we first met at with the wonderful Hannah who leads the choir at 7pm on the Friday - spent the best part of 20 mins warming up and stuff and approx 40 mins actually singing.  Eek!  We had a two hour rehearsal on the Saturday morning from 10am-12noon in the indoor stage (De Montfort Hall - on the floor level, with no allowance for seats (very grumpy security refused to let us move chairs), limited lighting (til one of the guys stood on a chair to adjust how the spot lights lit things a little better) and ultimately the crew on the stage setting up for the next act (not due on until 12.35 - one of the choir eventually asked 'politely' if they could wait til we'd finished rehearsing as we couldn't hear ourselves!).

We finally met on the Sunday evening at 5pm for a rehearsal til approx. 6.30pm when we were allowed to head to the backstage area of the MAIN OPEN AIR STAGE!  We trooped on at 6.40pm as planned to an awaiting crowd (far larger than I think any of us anticipated .... and then had to wait another 10 mins for the sound people to finish setting everything up.  Grr! 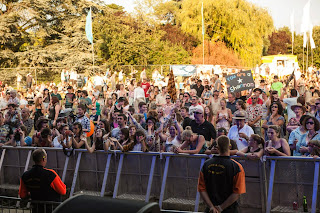 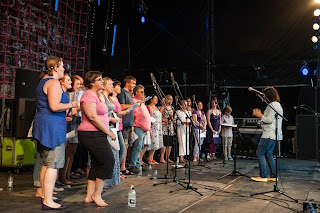 Whee!  It was a blast.  And you can inflict the sound on yourselves as well if you so want!

Wot??? No solo from you?
(Younger daughter was particularly pleased to hear "Somebody That I Used to Know" and "I Wanna Be Like You", while I enjoyed hearing "Down to the River to Pray", "O Brother Where Art Thou" being one of my favourite flicks.)

Where are you in that group shot? I don't see a lot of stripes anywhere.
The lot does sound pretty good.

Second from the left, front row, correct? Next to the young fella who did a solo?

Yep Persephone, that's me in purple next to the lovely Gus who sang in "King of the Swingers". The dress code didn't really allow for stripes sadly, we had set recommended colours --- so I went for the purple and dark pink combo!

I was wondering if you had striped socks out of sight down there....