Well the day started early with me getting my hair done! 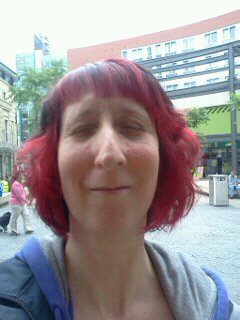 Neil then contacted me to say he could come to town to have lunch with me before I got the train to Leicester for Summer Sundae 2012.

We had a lovely meal at French Living in Nottingham, and then it was back to work for Neil and off to festival land for Lisa.

After a wander - and discovering my beloved 'summer burrito' stall wasn't there this year! *boo-hoo* - I strolled off to catch Bowerbirds.  I especially liked their new song which included the line "I still believe in a brighter day".

I then headed from 'Into the Wild' (the tent stage) to the Indoor stage (this year known as the Crocodile Lagoon) to see Loney Dear because I really like a bit of multi-instrument and multi-vocal pedal-created performance.

Emil Svanangen (for it is he) is Swedish - part of a significant Scandi contingent for the festival.  Very lovely and spooky.  I caught a bit of Clock Opera, but wasn't taken enough to loiter so headed to see Francois and the Atlas Mountains --- only, the French Atlas Mountains were on holiday, so we got instead a different set of fine musicians to accompany Francois including the brilliant drummer from Camera Obscura!  Neil joined me in the HOT tent - hurrah!


We then headed to the (even hotter) 'Watering Hole' tent - the main bar - where we were to watch the lovely Tiny Ruins.  Hampered by APPALLING sound engineering (seriously one of the downsides of too many of the acts) they nevertheless were utterly charming and it was only the need to attend the Summer Sundae choir rehearsal that stopped me staying to meet them afterwards.  Delightful stuff.  I'll try and add a pic later!


I'd have liked to have seen Ghostpoet but the clash of the choir rehearsal put pay to that concept.  Grr.  Nevertheless, we did see about half of Asian Dub Foundation (who we then found in the breakfast room of the hotel we were staying in!) and we then headed inside for Patrick Wolf.

Nothing could beat that so it was back to the ranch to freshen up and sleep.  I had another early start the next day.
Posted by Lisa Rullsenberg at 11:22 am