I had made a promise to a former student of mine when she finished her English degree last year that I would go with her to Stratford to see a Shakespeare play, along with her daughter.

On Saturday, after a few bumpy organisational moments on my part, we finally managed it - and despite some tremendous showers of rain, nothing dampened our spirits.

The Comedy of Errors is one of the shorter plays (slightly, depending on the production) and has at its core a good bit of farce: two lots of mistaken identity twins.  High-larious, and potentially perfect fare for a first-time full-length Shakespeare experience for a young person. 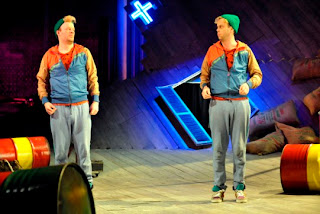 So the rather brutal opening, even if undercut by involving a fish-tank with plastic fishes, was slightly alarming.   I didn't envy what Nicholas Day underwent as Egeon.  He seems to have got the short-straw presently for being the brutalised actor.  All this after Marat/Sade!

I shouldn't have worried though, despite the occasionally varied tone: the basic gist of the story - the wrong husband, the wrong servant - was charmingly portrayed and ultimately easy to follow.  There were plenty of laugh aloud moments, and the two Dromios were wonderful (Bruce Mackinnon as Dromio of Syracuse and Felix Hayes as Dromio of Ephesus).

And actually, there was an underlying sense to the violence of certain scenes: the text makes clear that Ephesus is state in terror, with the Duke executing anyone from Syracuse who lands on the shores.  And unlike others I had no problem with Sandy Grierson's Scottish accent in playing the Duke/Solinus - well, you probably could expect that.  Making the docks a place to import bodies and goods, at great risk to all concerned, underpins this interpretation and heightens the risk that Antipholus and Dromio of Syracuse take in smuggling themselves to Ephesus in pursuit of Antipholus's lost sibling.

Overall then, a joyful production with plenty of staging amusement - I especially liked how Adriana and Luciana's room 'flies' in as a box to the stage.  (Indeed, both sisters were great:  a mix of steel and confusion - and a piercing scream - from Kirsty Bushell as Adriana, and prim little-sister-ness from Emily Taaffe). 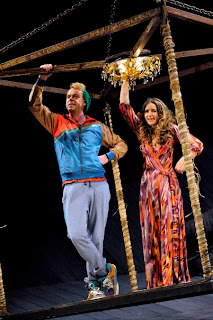 And it was hard not to be charmed by Amie Burns Walker as the Courtesan, an ostensibly small role which she absolutely utilised to the maximum, not least in her reactions to confused wife Adriana pulling down the Courtesan's dress to a moderately more decent length. She was suitably flirty and utterly ran rings around the men who encountered her. 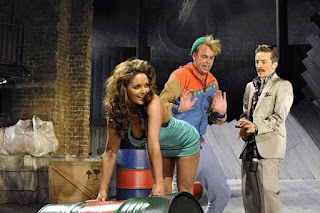 Overall, it was an enjoyable way to spend an afternoon, especially in good company.  Doctor Pinch - a very scary cameo role from Jonathan Slinger - was excellent, and there was much hilarity to be gained from rapping, singing, and general inability to actually be cool and 'hip'.  Plenty of out-of-their-depth attempts at being cool fell flat in the most comedic ways possible.

I hope that the experience - combined with having seen the Open Stages taster events last month - will have given another youngster a taste for Shakespeare.  It's certainly a good way to spend your days.
Posted by Lisa Rullsenberg at 1:29 pm