"With pleasure": a cultural day review including Film Review: The Artist 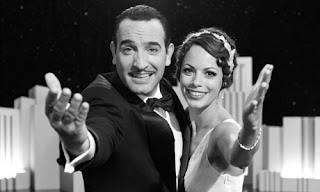 We had quite a cultural day yesterday - started off by going to Nottingham Contemporary to catch the Klaus Weber exhibition before it closes today; walking around St. Mary's Church in Hockley; going to the Broadway Cinema to see The Artist; and ending up by watching the first couple of episodes of Borgen, our new Scandi Saturday drama.

All in all a very lovely day and I will try and post some pictures here soon of our day out.

In the meantime, I want to focus on commenting about "The Artist" which is quite possibly one of the loveliest films you could possibly hope to see this year (if you have not already been lucky enough to see it).

You can imagine the pitch:
As Neil said of the executives, he could imagine them asking "but it's in 3-D, right?"

A rather sniffy review in Sight and Sound (the BFI's film magazine) dismissed it as a 'novelty', and it's true there is unlikely to be a resurgence of new films made in this way. I'm not expecting the new year to bring in dozens of 'silent' movies. However, the review did really irk me when I read it after coming home from the screening thoroughly uplifted.

Whilst it would be wrong to hold individual reviewers to be 'stand-ins' for the magazine (let alone the BFI as a whole), Sight and Sound does have an unfortunate tendency to sometimes grant the most gross-out populist film serious credence and credibility than it would ever deserve; to be so harshly dismissive of an undeniably populist film as 'The Artist' which has much higher ideals underpinning it seems at the very least hypocritical.

So a gross-out film aiming for the populist 15-24 year old is more 'honest' than a beautifully observed homage to the silent (and classic) eras of Hollywood appealing to an audience encompassing everything from children to grandparents?

I know which 'honesty' I think deserves more analysis.

[Link to "The Artist" trailer - sorry: could not embed] 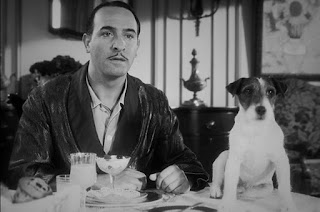 I've come to a conclusion about films and their audience: if you get to the end and the audience starts applauding, I think you've got something special on your hands as a feel-good movie. Most times, people just filter out. They may be smiling and happy even, but I do think that applause in a cinema is now a rare enough commodity to mean something.

The storyline is simple: a heroic romantic, daring-do-action film star meets a wanna-be actress. She is on the way up; he is on the way down. This is because soon after they meet, talkies arrive. Our leading man - elegantly captured by the performance of Jean Dujardin as George Valentin - is not someone who talks: indeed his first intertitle 'line' is "I will not speak." Our leading lady, the suitably named Peppy Miller (played by Berenice Bejo) is, in contrast, positively entranced by talking. Will their attraction lead to happiness? Can there be success for them both?

During "The Artist", there were many sequences where, with no music either (despite a luscious near-continuous score by Ludovic Bource), there was just pure enraptured silence in the room. Nevertheless, we laughed at the utterly adorable Jack Russell (Uggie) who deserves an Oscar in his own right; we wept at the sight of an intertitle reading "BANG!"; we grinned with delight at the dance sequences - everything about this film is so perfectly pitched to carry the audience along with it.

The visual tropes deployed are not all from the silent era - there are a number of sequences owing much to Citizen Kane for example. Overall then "The Artist" plays with and looks affectionately upon those 'tricks' of both the silent era and some of the classic period Hollywood cliches. We read lips well, but not always well; we understand that when a dog runs up to a policeman he needs his attention for an emergency; when a producer/studio owner sees dollar-signs, he doesn't care if it's the old or the new as long as it works.

Nostalgic? Yes, this film is undeniably infused with a lifelong passion for film. Will it encourage audiences to look again beyond the latest 3-D widescreen fad to older films? One can only hope. And in the meantime, expect the sentimentality of the BAFTA and Academy Award committees to shower "The Artist" with awards. For once, one lives in hope they do...
Posted by Lisa Rullsenberg at 2:01 pm

The Artist was my New Year's Day film this year, because I have the superstitious idea that the show I see on the first day will set the tone of the year, and I'd heard so many great things about it.

It was lovely (our audience applauded too), but two days later, I saw another tribute to a whole different kind of silent film: Hugo. This is the film I want to clean up at the Oscars. We saw it on a small screen in 2D and we still loved it!

I won't be upset if The Artist does well, though....

Persephone - I saw Hugo before Xmas at our local multiplex (as the arthouse place hadn't got it til a couple of weeks later) and I have to say we were ENCHANTED.

Hugo is a breathtaking film of great beauty on all levels. I never thought I would feel so positive about a 3-D film but it was delightful and works in all formats because --- unlike too many 3-D films --- it actually had CHARACTERS and a NARRATIVE, as well as great DIRECTION.

That is why it worked. I would be very happy if between them Hugo and The Artist swept the boards...

Maybe the best movie of the year!