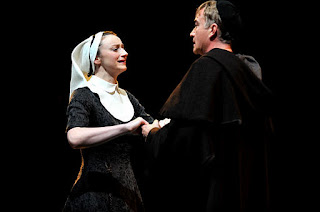 Well, as Helen inimitably stated "That was a first - I've never seen Shakespeare delivered through a gimp mask before."

Yes folks, this production kicks off the brothel scenes with high S&M and lewd abandon. It was like 'Marat/Sade' all over again!

But it would be unfair to labour this alliance in tone with the play as a whole: for 'Measure for Measure' is an awkward play of dark and variably high comedic tones. For example, Raymond Coulthard made for a dazzlingly magical Duke, beautifully comic and with a great turn in sleight of hand. Joseph Kloska was similarly engaging - his performance as the pimp Pompey showed an inventiveness and interaction with the audience worthy of any heir to William Kempe. There were a (small) number of judiciously included asides and 'improvisations' to the audience that had us in fits of giggles: as aptly quipped, "I've got work with what I've got here."

Interestingly, given that my main exposure to 'Measure' is the short scene of David Tennant as Angelo, seeing Angelo performed more as a scared and confused character (rather than manipulative) was actually rather intriguing. It made for a very different dynamic to the scenes between Isabella and Angelo which was very good to see after multiple watchings of the YouTube scene.

(Additionally, given the lewd tone of the brothel scenes, we were pretty grateful that Tennant was not taking a role in this production!)

Anyway, we thought it was very good and I wish that it hadn't sold out so much that tickets to take Neil back are unlikely to be feasible. Boo.

As penance for the filth of this play though, we saw 'Written on the Heart' in the evening and this time I saw the whole play! Morally better for us for sure...
Posted by Lisa Rullsenberg at 8:21 am