Film Review: The Girl with the Dragon Tattoo (US version)

Back in 2009, Neil and I skipped ahead of the UK release date curve for the Swedish version of 'The Girl with the Dragon Tattoo'. This involved being in New Zealand - in a cinema I sadly suspect no longer exists thanks to the earthquakes: sniff for the Kaiapoi PictureHouse Cinema.

Then they announced there would be the inevitable English Language film remake(s) of Larsson's book(s).

Once I had forgiven them for not casting Douglas Henshall in the role of Blomquist, I got on with grumbling more generally about the film(s).

Because by now having seen all three original Swedish films, I had fully accepted Noomi Rapace as Lisbeth Salander. Sure, she was not the near-anorexically thin character as portrayed in the books, but within the constraints of actually being able to be portrayed by an actress, she was a good approximation. 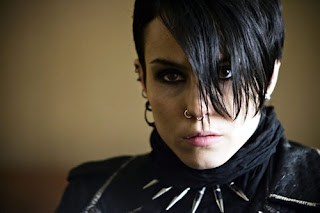 For the English language remake, they chose Rooney Mara.

Now, to give Mara her due, she does make a good stab at the role. They certainly give her the appropriate level of punky-spikeness... but... 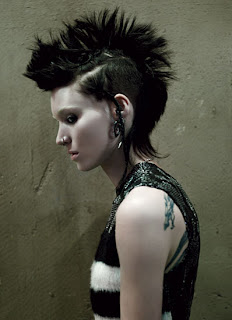 It just tries too hard.

The thing that Rapace captures in her performance is that strange mix of vulnerability, aggression and frustration with the world.  Let me give an example:

In the original version of 'The Girl with the Dragon Tattoo', Salander is staying at the cabin in Hedesby with Blomquist. Suddenly, without warning, she strips off and has sex with him. Done, she gets off and wanders away immediately. Salander is venting an urge - one she doesn't want and like an itch, she scratches it, rids herself of it and bolts. She is angry at herself for wanting and needing to do this 'act'. She satisfies the need. And that's it.

The US/UK version plays a much greater sense of emotional attachment both in that scene and afterwards. That is WRONG - just wrong.

In some ways the English language film version IS truer to more of the book (though it makes a bizarre and unnecessary change in the narrative for reasons I cannot fathom apart from the chance to film in the UK). But since when did a film version of a book have to be utterly faithful to all aspects of the narrative? No: it does not need to be accurate to the letter, but it should be true to the spirit of the text. For all that this new version is an excellent film - it has the budget both in English-language-recognisable casting and great photography to show for it - it still does not quite work for me.

Craig is okay - yes, still grumbling about that - and I like the 'glasses-hanging-off-one-ear' quirk that they give him. But he is too buff, not 'middle-aged' enough. He looks gruff, but that isn't the same thing at all.

And I still maintain that all the film-makers have missed a trick with regards to them failing to include in the dialogue any of Salander's infuriated references to Kalle F...ing Blomkvist or Kalle Bastard Practical Pig Blomkvist. Indeed, that whole Astrid Lindgren thing with both Kalle and Pippi Longstocking from her books is a real loss to the narratives, not least as in the final tale it plays a crucial part in Lisbeth accessing technology.

Like I say, it IS an excellent film. If I didn't know and love the Swedish originals so much maybe I would be more forgiving (can I just say as well, the opening title sequence is astonishing and surely the mark of Fincher shown best in the movie). But this English language version doesn't quite sail for me, and I cannot see me re-watching it multiple times in the way I have done with the Swedish version.
Posted by Lisa Rullsenberg at 8:47 am

Labels: Film, The Girl with the Dragon Tattoo

Hmm, from your example there Rullsenberg, I am very disappointed that US/UK version has Lisbeth turning all fluffy in the aftermath (and beyond) of sex with Kalle. NOT her at all and kinda alters her fundamental character within the whole film :-(

Yeah, I also thought it was an oversight (in the original, which I have seen and it appears, this version)that LS is not allowed to have her outbursts regarding KB, as she does in the book. They are gritty and true somehow and should've been in both screenplays I feel.
Probably still go see though :-)

It really IS worth seeing as it is a VERY good film. It just... it isn't quite what it could be.

Rooney Mara's Lisbeth isn't all fluff - far from it. But there is something not quite right about her relationship with Blomquist that is untrue to the spirit of the novel, untrue to her inherent discomfort/confusion at 'feeling'.

Haven't seen it yet, but now you are making me want to purchase the Swedish version as well.

Dan and I were shocked by the VAST amount of advertising in the US version. Everything from Google, to Mac, to whatever that vodka was. Bah. The ads made it too long.

I haven't read the books nor have I seen the Swedish version but I thought Rooney Mara gave her all in this role. I think she made her own and I see nothing wrong with the emotional attachment portrayed between her character and Craig's, in my eyes that makes her more likable and human. Why is it that some people are bothered to see emotions being display on film?! I see nothing wrong with that.