One use only - using existing music in films 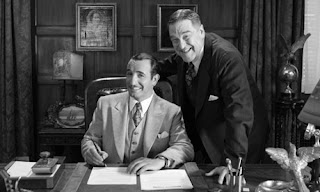 In doing so she makes problematic use of the term 'rape'. Sorry Ms Novak, but I am increasingly of the opinion that the word 'rape' is too specific as a term for a criminal act, often sexually/power motivated, to be any longer in its more general sense.

So what SHOULD be the use of music written for a specific film or context? By Novak's implied meaning, music can be used once, and once only, for its original context --- and never ever again.

I get that in this instance, the film director went with the 'temp' holding score of pre-existing music rather than a (later provided) original piece by the composer Ludovic Bource. One one level, it is a shame not to make more use of original music. However, it is not unknown for directors to get so attached to hearing a pre-existing piece alongside their first cut footage that the two become indelibly entwined. Sometimes you go with your instinct.

I accept that for some the use of the music from another context may well jar them from involvement in 'the moment' of the film narrative. But music is so often used and re-used that it is hard to imagine of the practicalities of Novak's implied meaning that music has a once-in-a-lifetime purpose. I appreciate that re-use of a particular piece of 'scoring' may work differently to the use of a song or even a classical/jazz piece of composition, but does it really jar THAT much? I'm quite familiar with 'Vertigo' and it didn't detract for me any more than the use of Duke Ellington or any of the other jazz pieces used here. Indeed, the smooth integration of existing music with the actual Bource score only succeeded in reinforcing for me how well Bource captured the essence of silent and classical Hollywood film scoring and live music performance.

I'm therefore glad that those involved in 'The Artist' have defended their use of the existing music. It does seem a petty dispute.
Posted by Lisa Rullsenberg at 6:14 pm