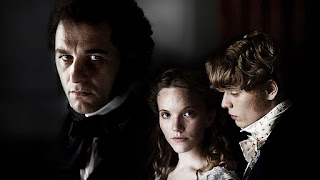 This week the UK got to see 'The Mystery of Edwin Drood', the latest of - incredibly - many versions of Dicken's unfinished novel.

The adaptation by Gwyneth Hughes was utterly suitably melodramatic, but it was also spectacularly entertaining. With a great cast it shone in virtually every respect but Matthew Rhys as John Jasper was stunningly tormented and yet not entirely hateable. A resolute air of grace also shone through Amber Rose Revah's performance as Helena Landless (see what Dickens did there with the orphan's surname? never one to pass up a naming opportunity was old Charlie boy).

And both the magnificent Ron Cook as Durdles and Alfie Davis as Deputy added the required dose of Dicken's humour.

Additionally, it looked wonderful - the cinematography (telephotography?) was beautiful, and the settings were used to great effect.

The narrative itself has all kinds of problems, as befitting its status as an unfinished work: finding a satisfactory solution to the myriad balls left metaphorically in the air by the author will always leave some unsatisfied, but Dickens himself was prone to bodged conclusions and abandoned subplots, so it seems churlish to moan at Hughes' efforts when dramatically as a piece of television these performances proved so entrancing and satisfying.

The USA, thanks to the wonders of PBS Masterpiece schedule, will get to see Drood - and the Xmas Great Expectations - over Easter (April).

Enjoy people: Drood is a treat.
Posted by Lisa Rullsenberg at 1:10 pm

Yeah, agreed. Thought it was fabulous. Didn't know the story at all either, which made it much better. Reminded me very strongly of Our Mutual Friend, so I think her solutions were elegant and plausibly Dickensian.