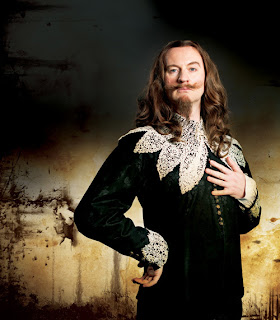 So, we're quite keen on political plays over here at Rullsenberg Rules: a play about the English Civil War, the King and Cromwell was definitely something to be intrigued by! I was thus hardly likely to pass the chance to see Mark Gatiss on stage, especially given that Douglas Henshall was also in the cast of 55 Days.

So with a weekend in London already planned, Helen Lisette and I headed to Hampstead Theatre up near Swiss Cottage/Finchley Road on Friday night fresh from arriving in the capital.  The rain lashed down, and then the fire alarm went off and we had to evacuate, and so for 10 minutes or so poor Mark Gatiss in his frilly shirt and 17th century trews was stood under an umbrella gamely chuckling at the fun and games.

It was a fairly starry evening all ways round actually, with Ed Bennett sat in front of us (Leartes to Tennant's Hamlet, and an incredibly fine Hamlet himself - as I noted when I saw Bennett's London performance). Clare Holman also in attendance, inevitably as she is wife to Howard Davies, director of the play.

The play itself
The isolation of King Charles is highlighted by his being the only figure on period costume - everyone else has vaguely modern suits (it's a very male play, though there are a couple of good female performances).  This actually works rather well - even if it did mean there was no 'wart-counting' for Cromwell [shallowly, no complaints from me for that, though I did miss the prospect of high boots and period trews for all concerned].

The script makes canny use of the tone of 17th century discourse (the religious attitudes, the political factions), without getting too bogged down in period diction: again, King Charles is isolated for having more florid speech in keeping with what we know (or rather imply) was typical speech patterns for the period.  It is, by virtue of its nature and topics, a rather densely expositional play, but it isn't unduly overbearing.  It IS an intelligent play, with a lot going on, and worthy of attention for that.  It is also, despite the weight, not without laughter - indeed, the hysteria at the end of the play finely shows how those signing the death warrant for the King probably could hardly believe what they managed to do.  It's an uncomfortable moment - hilarious and horrific for its consequences.

Cromwell takes several scenes to appear - tantalising for me of course, but it really heightens the tension for getting the main characters all present.  And once he does, Cromwell becomes a real pivotal force - both utterly and subtly in control and yet driven into his courses of action by events he cannot quite control. The scene where Cromwell and Charles meet and talk is pretty electric for all that it is entirely fictitious. 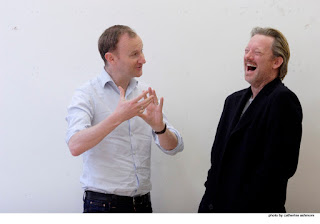 Charles is in turns baffled by the threat to his authority, automatically expecting and mostly getting deference from his jailers and challengers. His accent and his stammer are exacerbated as his control over his destiny diminishes: when he realises that the quality of his argument - a divinely annointed King, far more than a man - will not save his neck from the axe, it is quite horrifying how he suddenly tries to get out of the situation.  The bravado of earlier ripostes disappearing, replaced by uncertainty in speech and demeanor.

I mentioned before about the limited female roles: but they are good ones.  Abigail Cruttenden as Lady Fairfax is brilliant - her faith and conflict with her husband is archly portrayed to rich effect.  She is more than equal to her husband who finds events, and Cromwell, going far beyond his own expectations of developments.  Likewise, Laura Rogers as Mary Cooke - wife of the recruited lawyer prosecuting the King, is similarly measured up to her husband and what he needs to do.  And if I need a more female-orientated Civil War narrative, I'll re-watch the excellent Channel 4 drama: The Devil's Whore.

Early days, early responses
I made the mistake of reading a review/comment on the play on Friday before heading to London.  It was pretty damning and I did fear for how the evening would go.  Both myself and HLW were exhausted (work is always pretty knackering this time of year) but as the negative reviewer commented on how high their own expectations had been, it did unnerve me. I shouldn't have worried though.  It was fine.  Press Night is Wednesday 24 October 2012 - but I'm not deterred.  I know I have a vested interest to enjoy the play, but Helen who has far less personal interest felt utterly enthralled and we ran on adrenaline til 1am.

Personal note
Awh, bless you Mr Henshall, you can make the worst of times light up with your friendly smile and affection.  At the end of a long working week, you were a real tonic.  I hope you enjoyed your much desired cigarette after the play.  Thanks to Mr Gatiss who also was kind enough to sign my programme.

Posted by Lisa Rullsenberg at 4:33 pm

Still jealous of the availability of fine entertainment over there. Cirque du Soleil just doesn't compare, no matter how many clowns they throw in.

Awh I know we can get spoiled here. I still owe a review of our other cultural treat fro the weekend - Jonathan Pryce doing King Lear in what will take some topping as best Lear I'm likely to ever see...