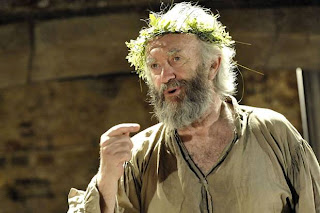 When this was first announced about 18 months ago, Helen Lisette and I were both very excited - the prospect of seeing Jonathan Pryce on stage doing King Lear was a great prospect.

And we waited.  And waited.  We thought we may have missed the public ticket sale dates, but then somehow, HLW did it ---- she got us tickets.  Hurrah!

So last weekend, with the late addition of an early schedule performance of 55 Days to enjoy as well over the weekend, we headed to London for what we hoped would be a tremendous theatre experience.

It was: if I see a better Lear in my lifetime I will feel privileged indeed.  I suspect it may take a current generation to get older before there will be something to match it.  The sisters, especially Goneril (Zoe Waites) and Regan (Jenny Jules) were excellently venal in their manipulation and overthrowing of Lear's power - but there was also a well-played (and mostly understated) hint of a somewhat abusive relationship between Lear and his older daughters.  For example, in the opening scenes, where Lear throws open the map to allocate his kingdom according the whim of the daughters' ability to flatter him, Lear kisses Goneril.  And the kiss is... unseemly, excessive, inappropriate, unnerving. The jealousy of the older sisters towards the youngest, Cordelia, reaffirmed by Lear crowning her with a coronet before the division of land has even begun, is thus undercut by the pointers to the past.  What horrors have the older sisters endured before their - much younger - sibling arrived?  It is not overplayed throughout, but there are hints to highlight the power relationship between father and daughters that perhaps contextualises the later violence and horror of the play. 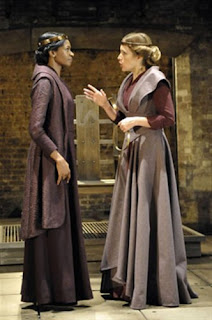 The cast was uniformly good I felt - a real ensemble performance.  Cordelia (Phoebe Fox) stands her ground to her father; Gloucester (Clive Wood) is powerhouse of a figure, bought low by the betrayal of his King and his bastard son; Kent (Ian Gelder) never waivers from his loyalty to Lear despite the horrors that ensue, and he works throughout to bring Lear back to himself, to those who care for him; and the Fool (Trevor Fox) is charmingly wise in his observation of the social disintegration around him.  These are just a few of the key performances, and I always find the worst weaknesses in the role of Cordelia are within the text itself (though Fox and the director Michael Attenborough, do their best to make this a livelier Cordelia than is usual).  But everyone does their part.  I never quite got the measure of the Duke of Cornwall (Chook Sibtain), but Cornwall is an odd role - the utter violence and spur of action with Regan at his side one moment, having come across initially just as an ambitious and thwarted husband to Lear's second daughter who ends up cuckolded almost as badly as Albany (Richard Hope).  Indeed, the husbands to the elder Lear daughters have a rough time all round really, and it is credit to Richard Hope that Albany's own cuckolded haplessness is pitiable rather than despicable (Steven Elliott as Oswald really bring out the self-serving venal qualities of this character). I was also impressed with Richard Goulding as Edgar who was suitably fit (in all senses) to play the high-born, well-born son of powerful Gloucester, who is bought down by the intense hatred of his illegitimate sibling, Edmund (a finely powered Kieran Bew). 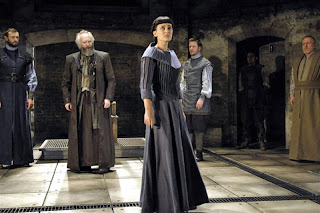 An additional note: hilariously, at the interval (post-eye-gouging) I actually heard someone complaining about the production "excessively bloody, far more than necessary".  I nearly fell over in astonishment - did they fancy bloodless eye-gouging?!  What is this - the Disney version?

Probably difficult, if not impossible to get tickets before this closes next weekend, but a gem nonetheless.
Posted by Lisa Rullsenberg at 8:23 am