Diary of a Football Nobody - by William Ivory: Saturday 13 October 2012 (matinee) @ Nottingham Playhouse

Diary of a Football Nobody is a remarkably touching - if VERY sweary* - play about Notts County Football Club and much more. 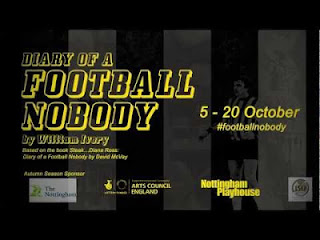 The play is adapted by William Ivory from David McVay's memoir Steak...Diana Ross: Diary of a Football Nobody (and Ivory was in the Cast bar at the Playhouse ahead of the play - no, we didn't bother him).

It's a very parochial play - for all the life-affirming stuff and context which speaks to community, family life, education and employment - the play is shot through with a vein of Nott'um nostalgia and reference points that would probably be lost on anyone lacking experience/awareness of Nottingham either past and/or present.  The play - for all it's brilliance - is unlikely to travel far (heck, getting beyond the boundaries of Nottingham would be difficult and as the likes of Bingham and Mansfield come in for flack, alongside the inevitable loathing for Derby and Nottingham Forest, I can barely see it travelling into Nottinghamshire).

But it IS brilliant.  I mentioned before the life-affirming stuff, and that is something that moves this play beyond JUST being about football, to highlighting that "Football isn't a matter of life and death - it is much LESS important than that".  This play shows that human beings play football: people with lives and families, lusts and foibles.  Too much Shippo beer, too many women, too much distraction from the people around us.  But in representing an age when a football player could achieve the giddy heights of earning so much as to have had to be a 'Foreman at Raleigh' to match their financial power, it's a wonderful reminder of how football has changed.

The music in the play is deftly chosen - from the obvious pop chart stuff to the delicacy of Nick Drake. It's a beautiful evocation of period, place and people (anyone with memories - first or second-hand acquired - of those days of County 'stars' will chuckle at the representations.  The staging is like Roy of Rovers come to life in graphic tone, and the comic-book realism suits the recollections it presents.  There's little in the way of fancy, the imagery of Nottingham is lightly used, and the most technical most involves a short use of wires which draws spontaneous applause from a delighted audience.

And all this is topped by the generous and heartfelt performances:  Eric Richard is especially good as Jimmy Sirrel and our lead, Perry Fitzpatrick as Dave McVay is by turns baffled, distressed and desperately trying to have a good time being a footballer with A-levels. 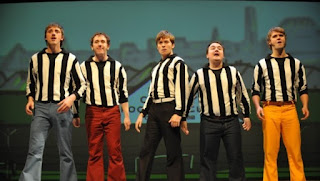 LeftLion like it - of course they do.  It's only on for another week.  Get there if you're in the locality.

*It would be ridiculous if it was non-sweary (does anyone alive think football and its milieu was NOT sweary in the 1970s?)  But nice that the sexism, racism and homophobia is largely dropped.  You can be too honest...
Posted by Lisa Rullsenberg at 11:28 am