Neil can sometimes really help bring the happy to a week - on July 4th he spotted that three bands were doing a free gig at one of our best local pubs in Nottingham.  The glorious Malt Cross Music Hall is a real hidden treasure in Nottingham, tucked on a small side street just off the main Market Square. 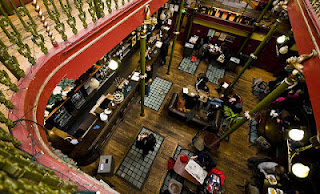 The building was built in 1877 and restored a few years ago.  The glass roof is a beauty: 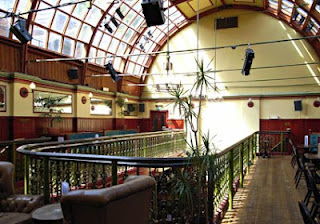 Anyway, on July 4th we headed there from work to meet and have food (they do decent food at the Malt Cross too),

We were so early that the bands were in the process of setting up on the balcony and rehearsing.  The three bands on were: Red Shoe Diaries, August Actually and topping the bill, The Lobster Boat Band, essentially Howard Hughes from the band Coming Home and David Tattersall from The Wave Pictures, plus other members from these respective bands.

Watching the bands rehearse was lovely - we had some extra tracks and therefore also had chance to enjoy a bit of extra music.

In terms of the gig(s), I wish that August Actually would release some of their new vampire/werewolf flavoured tunes, but they were a real blast to see live - a kinda Jeffrey Lewis style collection but with added fun.  Love the trumpet playing and electric violin, but mostly loved them for their quirky lyrics and tone. And Red Shoe Diaries are always good - seen at Summer Sundae a few years ago and still entertaining even as a 3-piece (the rest of the band were unavailable).  They also did a nice line in loaning a guitar when things went awry, but mostly for me me this evening was about the fabulous Tattersall, Hughes and co - everything else was a gorgeously appreciated bonus!

It was especially nice given this was a free gig in a pub that Hughes still ventured from the balcony stage down into the pit to sing a cappella, quietening the noise in a lovely way.  His elegant swing beneath the railings, using his height to make the move look effortless, was a joy to see (he'd checked it's feasibility earlier to do this maneouvre!) 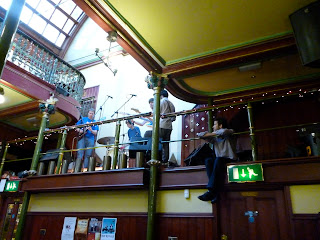 Howard Hughes getting ready to test his theory that he can elegantly clamber from balcony to ground floor...

And Hughes a cappella singing was delightful, taking to a chair, ending by singing from the stairwell to the balcony. The Malt Cross is an odd venue because the balcony stage means you are looking DOWN from a height to most of the audience, with another section of audience looking DOWN on you.  Anyway, we had a fab time and here are some pictures of the occasion. 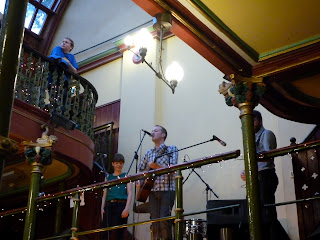 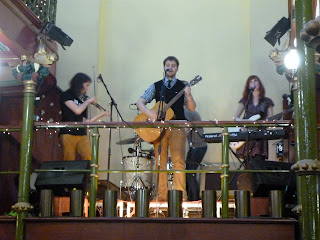 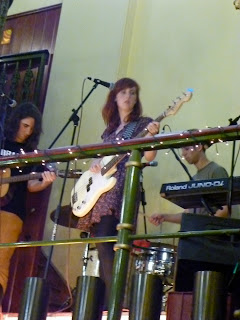 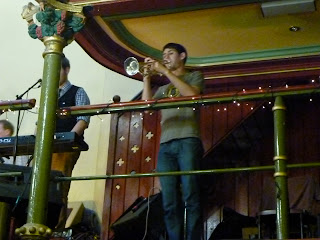 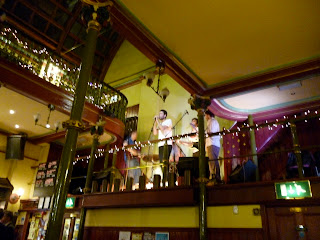 Posted by Lisa Rullsenberg at 10:45 am