Neil had spotted that there was an exhibition of Jenny Holzer's work - the show is called Sophisticated Devices - at a private gallery.  I'm rather fond of Holzer's work. I came across her during my Art History studies (not Rat Hostiry as I just typed).

Holzer specialises in text-based conceptual art.  The work, the words and aphorisms are sometimes oblique, usually intentionally provocative (are we meant to agree, disagree or recoil in horror at the observation?), but always intriguing...

The overview images on the Spruth Magers site give some ideas.

Spruth Magers Berlin London are the archetypal private gallery.  It's in Mayfair (not far from Cork Street, still historically centre of the art world in London) and it's staffed by pretty girls - with MacBooks - and there's not another visiting soul in sight when we go in.  Admittedly, it's a cold and VERY wet Saturday, but even so.  Neil and I have increasingly come to the conclusion that although not discouraging, the manner of private galleries is scarcely one of "come on in".  Getting the courage to walk up to the door, let alone to buzz to be let in, is hard.  In that light, this particular artwork from the show seems very apt. 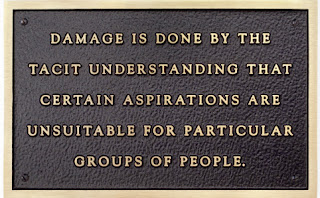 It almost makes me sad, because Holzer is foremost a PUBLIC artist.  I don't mean that she makes public artworks only (though she does) but because her works function with regard to public observation.  They are about and for people.  How and why we think.  The world of consumerism, expectations, social mores and perceptions. 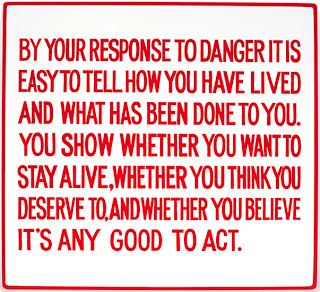 Her works are public provocations to think more about ourselves and the world.

I particularly liked the granite benches included here, their solidity reinforcing the harsh statements made on them.  This one really struck me:


YOU SHOULD LIMIT THE NUMBER OF TIMES
YOU ACT AGAINST YOUR NATURE,
LIKE SLEEPING WITH PEOPLE YOU HATE.
IT'S INTERESTING TO TEST YOUR
CAPABILITIES FOR A WHILE
BUT TOO MUCH WILL CAUSE DAMAGE. 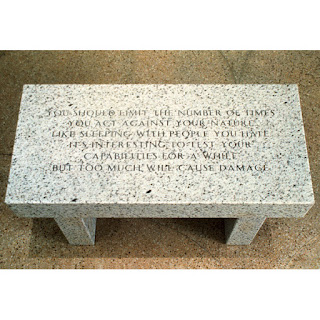 Posted by Lisa Rullsenberg at 2:05 pm