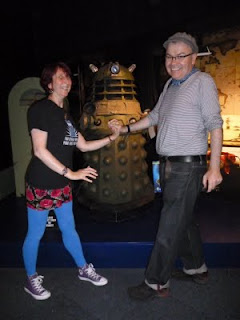 Rullsenberg and Neil face their first Dalek together!
What can I say?!
Frank went and I thought... you know what I really DO want to go to the Doctor Who Experience at Olympia in London!
So when the lovely Mark (Neil's brother) offered for us all to go whilst the NZ family was in London - well I was VERY excited! 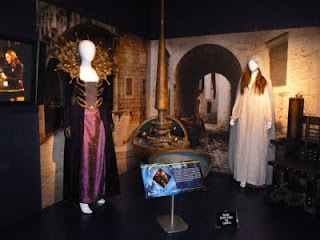 Pre-view of the exhibition space in the waiting area
The interactive bit may not be as long as some would like (I was certainly tempted to pay the extra £4 to go back around again!) but it is nevertheless a brilliant experience. You're not allowed to take photos or video in the interactive section and I totally appreciate why.
At first it seems like a fairly innocuous play through of the universe and the Doctor's role in it, but then the crack appear and we're into the really fun part - and Matt Smith's 'conversation' with the shoppers pitches just perfectly to involve both adults and children alike. The appearance of the TARDIS is enough to make a giddy fan girl's heart beat faster, and the scares... well, they're pretty damn scary. And 3-D was never better used. I don't want to spoiler it too much for people, but suffice to say you're really close and it feels really REALLY exciting for those of us not lucky enough to get in to the real set and filming (actually, given how filming works - lots of setting up, shooting the same ten seconds from four angles, standing about in the Cardiff rain - it's probably the best fun to be had anywhere).
And then you're through to the exhibition section, which may be static but provides just as much excitement. The initial stuff you see before going into the interactive section proves to be just a taster. Once in the main exhibition, it is costumes, monsters and images a-go-go. 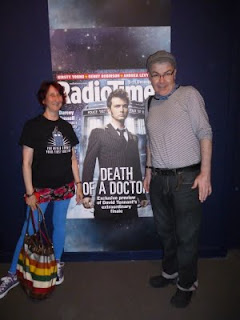 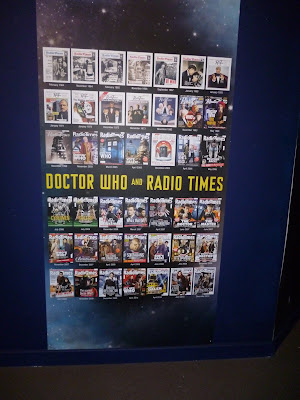 Having been through the latest incarnation of the TARDIS interior, in the exhibition they've reassembled the coral forms of the 9th/10th Doctor's TARDIS... and oh my it is LOVELY to see it up close... 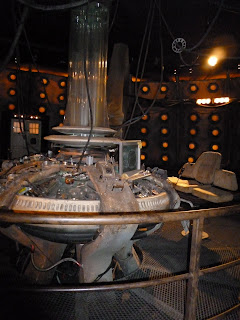 9th/10th Doctor TARDIS
Not least because on the wall of the space, they've got a stonking large screen projection of the regeneration of the 10th Doctor into the 11th Doctor (from the moment when Ten enters the TARDIS to 'Geronimo!')
Yes, including the 'ever-causing-a-lump-in-my-throat' moment of "I don't want to go". 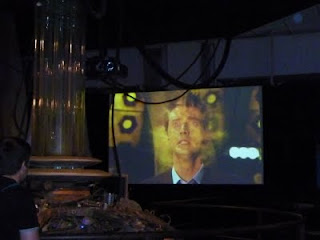 No, I'm NOT saying how many time I watched that clip.... or how often I sighed and said that line along with him... 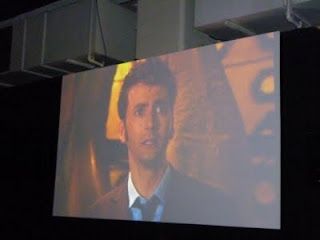 Just seeing a TARDIS up close, just seeing the costumes of all the Doctors so beautifully displayed... that alone would be worth the time you can spend in the exhibition (which brings together even more stuff than Helen and I saw in Cardiff in January 2009 - where photography was definitely a little less permitted). 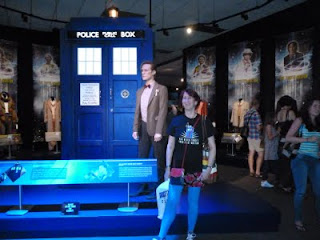 Rullsenberg in front of the TARDIS (and a rather dodgy figure supposedly representing Matt Smith - poor man deserves better!)
As it is there are many, many more things to go SQUEE about --- the TARDIS interior from c. Five to Seven (eliciting much sighing from true Who geeks in the exhibition); a lovely section on the sound of Doctor Who with Stuart Maconie singing the praises of Delia Derbyshire; a 'walk like a monster' teaching session - with loads of space to stomp out your inner Cyberman; companion costumes; a collection of the changing Dalek forms ... enough to scare anyone... 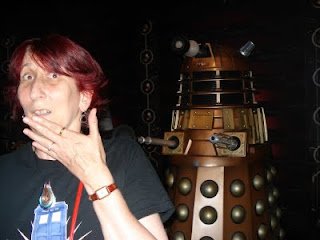 ....and Cyber-heads (lovingly recreated where dilapidated originals cannot be found); a Zygon (WHEE!!!); the Silence, and a creepy gas-mask wearing child. 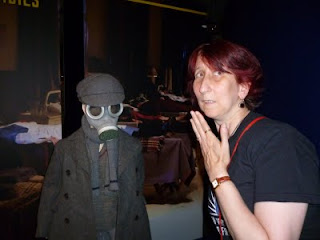 Rullsenberg is feeling unnerved...
For the smaller sized, there is even a Dalek you can sit in and operate! (I couldn't quite justify booting out my lovely niece to have a go myself...)
Oh: and did I not say? There is also a super green screen area where you will HAPPILY part with additional cash to be photoshopped into various scenes and objects. They have the Pandorica seat for those addicted to the props (background only required for the green screen on that), and there are several other locations to be imaginatively dropped into including the TARDIS, and a rescue mission from outside the TARDIS ...
Between us, we all made an appearance on the great green screen of wonder and had a blast doing it! 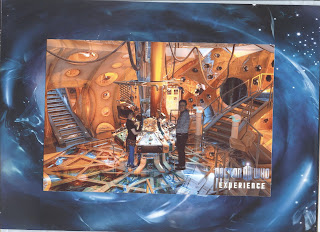 Rullsenberg and Neil in the TARDIS! 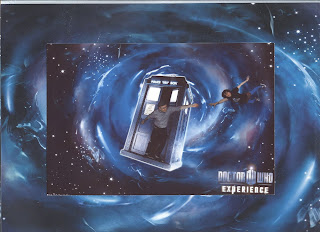 Neil rescuing Lisa into the TARDIS!
We were in the whole thing for the best part of two hours, and had no objection to going to the shop ("hello shoppers" indeed) at the end of our time in the interactive and exhibition spaces.
The only thing is, how can I schedule going again before it leaves for Cardiff? And then who can I get to go with me again to Cardiff?!
Posted by Lisa Rullsenberg at 4:01 pm

All looks great fun. Love the pics of your interaction :-) Good stuff.

Thank you for the post, really useful data.
on sale Townsen | on sale A Peace Treaty | cheapest price for Watches

Thanx alot for info. to state more, I developed a http://petzoom.coolpetdevice.com as taht's the site having awfully pleasant subjects to glance at.
5