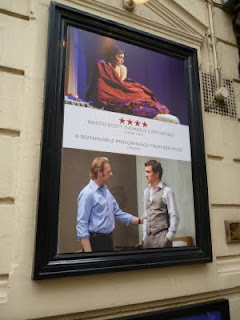 Being honest, that first visit to see the current production of Betrayal - starring Kristin Scott Thomas, Ben Miles and Douglas Henshall - was lost in a haze of giddy delight. (Give a girl a break: I was in row B and was lucky enough to see the cast afterwards at the stage door. It was - to put it mildly - 'a bit of a day' all ways round).

Anyway: such a good set of performances deserve a more considered viewing, and so it was that I managed to take the lovely Chrissie to see the production on Saturday 9 July - and then take my very indulgent partner on Wednesday 27 July.

On my visit with Chrissie back in row B (ironically the same seats as my first visit, though they were booked separately!) there did seem to be some backstage glitches - scenery movement seemed to be a lot rougher and noisier during scenes than first time - and a glass got broken on exiting through a doorway, but the performances were as on-song as ever. On my visit with Neil, things seemed to run smoother for the mechanics of the production, though I have to say I never envy Dougie having to deliver that final hurtle-paced speech of smitten adoration: it's enough to test any actor to their limit.

After three visits, I felt I wanted to do a more in-depth review of the acting and therefore (inevitably) there will be some *SPOILERS* about the plot for those who have not previously seen Pinter's play. 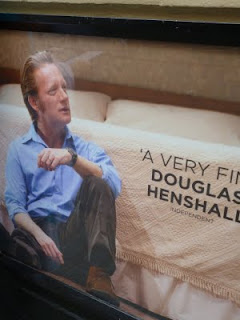 Wearing (again) a blue shirt - rather than the dark burgundy roll-neck jumper seen in some of Johan Persson's production photographs - the narrative starts in 1977 in a bar where Jerry (Henshall) brings drinks over to a clearly nervy cropped-haired Emma (Scott Thomas). She fiddles with her handbag, struggles with cigarettes, and seems on the verge of leaving several times. She and Jerry hesitatingly edge around their greetings - "how are you?", revisiting the polite enquiry repeatedly. They catch up on their lives: Emma is regularly "having lunch with Casey" (a writer published by Robert, and represented by Jerry as his agent), whilst Jerry breathily discusses seeing Charlotte, Emma and Robert's daughter, now aged 13. Jerry is consistently convinced he threw up Charlotte in Emma and Robert's kitchen: "No, it was your kitchen" Emma insists both in this opening scene (in a line that is echoed later in the play, in the earlier set scene of 1973). It highlights the acute ambiguity not only of what constitutes betrayal, but also the ambiguity of memory: how fragile it can be in its accuracy, in its meaning.

Over the course of their conversation, the audience is let in on Emma and Jerry's affair which betrayed the trust of both Robert and Jerry's own wife, Judith. Emma is close to tears (of fury?) as she talks about discovering her husband Robert had been unfaithful to her for years. Emma clearly wants (needs) to talk to someone who would understand the nature of betrayal - even though she comes across as ambiguous in her desire to rekindle things with Jerry. Although Jerry's words suggest he has long moved on from their lengthy affair, it is he who initiates all the unbidden gestures of touch: a stroke of the hair, a reach to Emma's neck. Jerry's utterly romantic naivety is beautifully captured by Henshall who remains convinced no-one ever knew about the affair he and Emma had for seven years. "We were brilliant", he declares in memory of their long-running and secret affair. He is horrified to discover that Emma has now told Robert of the affair, in the aftermath of Robert's own marital betrayal coming out.

But it is worse than even he fears. In one of the just three forward-in-time scenes in the play we see Jerry having invited Robert over - his 'best friend' still after all. Jerry is even more stunned to discover that Robert knew of the affair much earlier than Emma had said. Basically, Emma lied to Jerry and Jerry gasps that he didn't know: in reply Robert curtly acknowledges, "No, you didn't know very much about anything, really, did you?"

The play proceeds to wind back, from the end of the affair between Jerry and Emma to Jerry's first drunkenly flushed passionate declaration to Emma, scarcely behind Robert's back at one of their parties. In between, we see Robert's discovery of Emma's infidelity (during a holiday in Venice) and we see Robert's lunch with Jerry after the holiday - the audience know that Robert knows about the affair, and we know that Emma has lied to Jerry about being able to get to the islet of Torcello (Robert goes alone, after discovering the affair, and reads Yeats; Emma had said they couldn't go due to a speedboat strike).
Squash, that oh so physical game, takes on layered meaning throughout the play -- seemingly you can't play squash if you're having an affair. Judith - Jerry's unseen wife - seems likely to have both known about Jerry's affair and to have been having her own with a fellow doctor. All in all, there is a bleak inevitability to the consequences of infidelity, of betrayal in all forms.
It thus makes that glorious final speech all the more heart-breaking because we know where all of that passion that fires up Jerry to declare his love for Emma will end up. Although Emma initially, and jokingly, rebuffs Jerry, the end (the beginning) sees Jerry reach for her hand --- and when I have seen the production, Scott Thomas will gently close her hand around his at the split second before the lights go down. It is a beautifully poignant moment. And a lovely production.
Posted by Lisa Rullsenberg at 7:15 pm

Oh, I think the whole thing was just beautifully done. All involved were exquisite....a very precious memory for me ;-) Sigh.

Three times? You must have loved it

Nice article, thanks for the information.