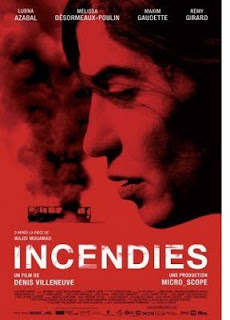 Incendies (2010) is based on Wajdi Mouawad's French-Canadian stage play of the same name, also known as Scorched. Cloud went to see this on Saturday 2 July whilst Helen Lisette and I were ensconced in shallow watching of DVDs. Incendies is the absolute antithesis of shallow, and when Cloud emerged he felt he had to get me to go back with him to see it (to share the trauma one might suggest).

Anyway: following an abortive attempt to see it on Monday 4 July (Broad Street and therefore the Broadway cinema were both closed due to a gas leak), we ended up going last night instead.

I can only urge people to go and see this if they can, or at the very least see it on DVD when it is released in September.

It is a grim watch in many respects; however, there is also a strong vein of love running through the narrative and it is this that gives the film a sense of hope despite all the violence running through it. It is also incredibly beautifully filmed, with only hapless Quebec coming across the worse for wear (being filmed mostly in a grey wet palette of wintery gloom, in contrast to the sharp natural tones of desert towns and crowded middle-east cities).

As Narwal Marwan, Belgian-Moroccan actress Lubna Azabal is superb. She plays, entirely in flashback, the role of an initially young and idealistic woman from an unnamed country, but clearly Lebanon, who is driven by conflict and violence to take up violence herself --- only to find that violence is used against her in a way that proves even more horrific than she was aware of at the time. Death begins and pursues this film with an implacable horror.

The narrative hinges on the events following Narwal's death in Quebec where she lived with her two children. She has worked diligently as a notary's secretary, and on her death, said notary Lebel presents Narwal's twins (Jeanne and Simon) with Narwal's will. The will demands that Narwal cannot be buried according to expected practices unless the two children each fulfill a quest. For the daughter, she must find their father (whom she and Simon believed to be dead); for the son, he must find their brother (whom Jeanne and Simon did not know existed).

Whilst Simon resists the instructions of his mother's will, challenging their mother's words that "a promise must be kept" (something Lebel also feels very strongly about), Jeanne takes up the challenge even though neither has much of a clue where to begin. With only her mother's passport, a photograph of Narwal as a younger woman and a Christian crucifix necklace to go on, Jeanne approaches her supervisor at the University where she works, assisting teaching pure mathematics. To uncover the truth, she must follow the twists and turns, the contradictions and the challenges presented by her mother's life story - following and analysing the variables, dealing with the conjectures in the same way she might deal with a mathematical puzzle.

I've avoided linking to the trailer(s): I think they say too much. I came at the film with limited knowledge and awareness and felt all the better for that. Yes: there are melodramatic elements to the narrative - but life is full of strange and weird coincidences and it is no less contrived than any number of other narratives. I therefore don't want to do much in terms of spoilers, except to say that the performances are excellent and the cinematography is breathtaking. Be prepared to be drained when you exit.

Oh, and Radiohead have probably never been better used to soundtrack a film.

“One plus one equals two, right?”
Posted by Lisa Rullsenberg at 8:08 am

Being in Canada, I've had numerous opportunities to see this. I'm too scared.
WV oribbill - as they say in Québec: "I'm afraid it will just be too oribbill..."

Review that you have shared here is so expressive. Really brilliant. Thanks.

Well this kind of blog with beautiful pictures is really worth searching for, good pictures for visitors and a value for you as will definitely show the quality. It’s good to have these kinds of fashion around to keep the flow steady. Doing those who really can make things right in the future, good work!