From the ridiculous to the sublime.... from Much Ado with its alternating frothy comedy and dark heart, to an altogether darker tale but one with painfully acute humour riven through its narrative. Betrayal at the Comedy theatre - until 20 August 2011.

Harold Pinter's 'Betrayal' is a searing portrayal of an affair. I came to the play not having read it or seen it previously but somewhat aware of the basis for the play (the love triangle of Joan Bakewell, Harold Pinter, and Pinter's then wife Vivien Merchant). Effectively a three-hander (with a minor comedic side-part), the narrative moves largely backwards - a device that still lends great poignancy to the encounters where variously the audience and the participants know more than each other.

The decision to not familiarise myself with the play in advance is something I try to do where I can: it isn't always easy, but if possible I like to try and come to the play as would a first-timer. It makes for an honest encounter I find - and seemed especially appropriate for this play where the learning is so much part of the narrative.

The production is deftly staged and the performances are wonderful. Kristin Scott Thomas (as Emma) is as luscious on the eye and the theatre audience attention as one may imagine she would be - the woman oozes great acting from every pore and frankly looks more gorgeous than it should be possible. Elegance and poise scarcely begin to describe the small nuances of performance she captures. She hangs on the brink of tears without letting them fall and the audience feels her emotions deeply (though the trust we may have in them is never less than problematic). Ben Miles, stuck with the largely nasty role of Robert (Emma's husband), nevertheless plays the role deftly. Prone to violence, dismissive (including of his wife) and venting his compromised testosterone into squash playing, Robert is not likable in the slightest - for all that he may appear to be a wounded party. But Miles is excellent, clearly relishing the part (even letting himself sport a suitable if relatively unflattering bouffant-esque haircut) and showing how his character's knowledge and awareness has developed through the course of the - forward-in-time - narrative.

Inevitably though, for me the highlight was seeing Douglas Henshall on stage again: material worthy of his talents can show how he shines, and on stage is often best. He inhabits the role of Jerry (Emma's lover) beautifully and just hearing him - oh that voice - was simply breathtaking. Seated close enough to see each flicker of eye movement, every twitch of the mouth, was especially wonderful in a Pinter play where those (infamous) pauses are not pauses at all really, but rather moments where the acting is all in the face, the hands, unspoken gestures and expressed thoughts churning inside the characters minds and projected to the audience. A true joy.

Having done one Stage Door run, I couldn't pass up the chance to do a second and knew that at least this time around it was likely to be a little less chaotic. There was an interesting split gender-wise with a horde of blokes there (a combination of Primeval geek boys and Kristin fans, plus some clearly professional autograph gatherers) and when a handful of women arrived - myself included - a slight physical relocation took place without thinking, placing boys pretty much one side of the door and the women on the other.

Ben Miles came out first - utterly charming man, far more handsome than the role allows him to be on stage. 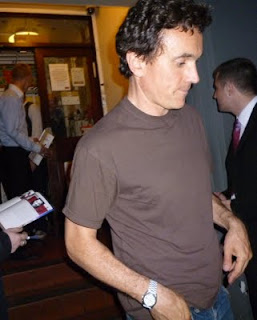 Kristin Scott Thomas came out last (and my camera battery and my ineptitude blew my efforts to get a photograph - natch!) and was duly swooned at by everyone there - amongst them a collection of guys were especially thrilled to get her signature for their squadron, and some French women delighted exchanged a brief conversation with her in French. 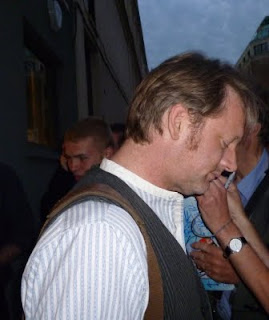 Hard to know what was nicer, getting a picture or him saying hi.....

When I went back to see Helen (duly waiting professionally at the corner well away from the Stage Door), I did a little dance of squee. Quite right too...

Additional remarks:
Please PLEASE people: I know iPhones are great and all that but PLEASE DO NOT TAKE PHOTOS IN THE AUDITORIUM! Especially NOT during the performance from the FRONT ROW OF THE STALLS! The ignorant dude in front of H and I seemed to not even be interested in keeping to the rules. H duly told him off at the end for trying to get a curtain call pic, but when a bloke sat near to me tried to tell him off once the cast had exited the stage for what the man had done DURING the performance, said iPhone user actually swung for him. I really hope the guy gets barred from future events.... play by the rules mate!

UPDATE:"So what of the production? It is well put together by Rickson, with some strong performances. Kristen Scott Thomas (who looks incredible at the age of 51) has excellent stage presence, and somehow manages to look younger as the play goes on (backwards in time!). Ben Miles also produces some great stuff, particularly during the restaurant scene, which was a highlight for me as the energy picked up and properly gripped the audience for a few minutes. The best performance of the night comes from Douglas Henshall however, and what differentiates him from the rest is the attention-to-detail in his performance. Pinter’s characters are not loud and epic in the way that Rooster is in Jerusalem. They rely on finely tuned and extremely intricate acting; subtle changes of expression, powerful interactions between the characters, and clever use of the eyes. In this respect Henshall’s performance is really very impressive, and perhaps the only performance that delivers what is needed for Pinter’s challenging penning. " - Everything Theatre Blog

We'll ignore that Quentin Lett's is a miserable misogynist and instead focus on the reviews from The Guardian and Teh Independent who loved the show...
Posted by Lisa Rullsenberg at 4:45 pm

I've seen both the movie version and the play version. The movie features Jeremy Irons and Ben Kingsley. I ask you...

It struck me as the best argument for marital fidelity ever. By the time you get to that final scene, any thrill is vanquished by the knowledge of the disasters to come.

Agreed, though I'd also say its much more than that as well.

Brilliantly incisive depiction of the destruction of relationships.

I've seen the film. Wish it was available on DVD (I think it used to be on a US-only one but even that seems to be a collectors' item now).

And hey - don't forget Patricia Hodge as Emma in the film. An under-rated treasure.

To say more, you can call on http://pasta-boat.supermegacook.com since it is the web site having awfully valuable things to examine.Thank you so much for information.
4