Here be VERY limited commentary on the first preview night.  You'll get a fuller review when I've been to see the play once they're properly launched. They're still ironing out little kinks, but they're pretty much spot-on for my money.  Looking forward to the future visits....

Because, yeah, not my final trip.  Multiple visits, moi?!

So this is avoiding spoilers as much as possible, mostly reporting on the experience.  Minor spoilers possible if you haven't heard of David Tennant, Richard II storyline, or capabilities of the RSC to do damn fine shows.

So there is the event ---- and then the aftermath 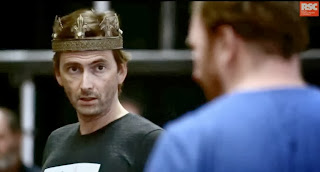 When I saw that the first preview night for Richard II at the Royal Shakespeare Company was scheduled for my birthday, it seemed like fate.  Who could turn  down such a treat? Yes, we all know why I was booking so early (clue: the link will explain why hanging on to book wasn't going to be an option - blink and the fans have nabbed all the tickets).  But I love the RSC and I love going to the theatre.  And I really wanted to see this production.

We arrived in Stratford way early, but this gave ample opportunity to raid the shop (books, jigsaws, postcards - programme, obviously) and to also have a lovely cuppa and cake with a dear friend.  Once in the theatre itself, I was already excited by the stunning set. Majestic about covers it.  And it was especially nice to scour around the space and then frantically draw over more lovely friends to get hugs and kisses before the play began.  Saw a woman waving in the stalls?  That was me getting their attention.  Yay for friends!

There is a nicely minimally spoilering comment piece here. Don't read it if you don't want to know.

The music is astonishingly good, the costumes magnificent (tho a few hems may need taking up to avoid trips and stumbles), and the acting was cracking. Nigel Lindsay was a revelation as Bolingbroke, and seeing Jane Lapotaire back on stage was a pleasure I did not think I would see in my lifetime, but *everyone* delivered on their performances.  Tennant was, suitably, Tennant-esque in his capacity to unpick a part and make it his own. Richard II as per the play ....

(SPOILERS - if you haven't read Richard II or know the story)


.... is vain, and brought low; he is capricious, and he is brought to realise his folly; he is in charge, and he surrenders power; he is a King in an age of the Divine Right of Kings, and he is raised an angel, flawed and beautiful.


Say what you like about the sort of audience this performance with this leading actor would draw, but until the curtain call, everyone pretty much holds their breath.  There are NO inappropriate squeals - as Tennant rightly noted in the recent Front Row interview, fans are smarter than that and KNOW what to do/not do.


There are laughs - director Greg Doran and his cast, including Tennant, are nothing if not adept at finding the right moment to flick a head, emphasise a swift "well...." or mine the possibility of line in broader context. They know how to find it and where (for me) it works.  Wonderful stuff.

I'll be honest, with my dodgy foot there was never going to be a swift exit.  We positively AMBLED out of the theatre.  And I expected to see the barriers at Stage Door 4 deep.

"I expected it to be busier than that..." I say

"Go on then" Neil replies, being his usual disreputable self in my downfall.

So I went.  And got a mid-place, second row spot.  And a few minutes later - after pointedly challenging the mutterings of some that they didn't care for anyone else coming out by me firmly saying "thank you" to everyone exiting the building - the intake of breathe came, and Tennant emerged....

He takes his time, at least at first, and several of those lucky enough to be on front row, get photos with him. Oh that I were organised and co-ordinated enough to do that!

As it is I content myself with the scribble signature (neater than the one I got post-Love's Labour's Lost) and as I say "thank you for making this such a great birthday for me" to which he replied in joyful tone "awh, it's your birthday today? Very happy birthday to you!" which pretty much topped off the day just right.* and **

Video proof I have a terrible memory is posted separately.

I could - and perhaps should - have stayed in place, got some photos; hell, even tried to get one for myself.... but ever considerate and aware of the 3-deep behind me, I pulled back saying to those around me "I'm done, let someone else through" which at least one (shorter) woman behind audibly acknowledged.

So, from a day that started with two women presenting the Today programme on Radio 4, through to seeing friends, through to the play itself (Neil loved it btw - good job: he's back in two weeks), and THEN the aftermath.... AND rescued episodes of Doctor Who.... (am sure David will have appreciated that as a nice omen) .... *SQUEE!!!!*

Well, who cares that I had to go to work?  Giddy just about describes the emotions, and my hands were shaking (the cold I tell you) as I tried to text update my gang of friends.

And here's the proof btw! 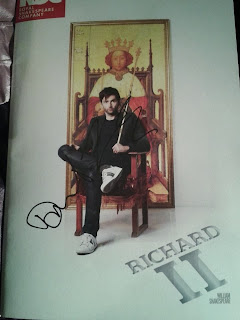 *A friend asked me about the birthday greeting exchange, thinking me/someone else had told Tennant in advance it was my birthday and the remark from him had been spontaneous.  If it had been, I think I may just have passed out there and then!

**What can I say - my brain was in freefall at getting a happy  birthday. Edited for video proof accuracy as oopposed to my giddy "what happened there?!" Brainfail.
Posted by Lisa Rullsenberg at 12:32 pm

A "Happy Birthday" from Mr Tennant? Prompted or not, pure gold! ("Gold!") I get to see this production at an Ottawa cinema in about a month. Bought the tickets two weeks ago. Rather excited.

Well it was a real real pleasure. And wooooo about you doing the cinema broadcast!

That'll larn ya to read your Shakespeare. Or British history.