Neil and I both studied Voltaire's Candide on our A204 Enlightenment course with the Open University.  So with Mark Ravenhill at the helm, we were rather intrigued by the prospect of an RSC production revisiting Voltaire's satire on optimism (an apt topic in this jaded period of optimism within austerity, as UK chancellor of the exchequer George Osborne would have it).

The RSC do a fine job with Ravenhill's take on Candide - which uses plays within plays, 'real' characters revisiting their past selves, and modern re-engagements with the moral and philosophical debates Candide first explored.

As the RSC site says "This performance includes strong language, violence and reckless optimism." Well, kinda.  There is certainly a lot of humour - both bawdy (as one might expect, nay, require from a Ravenhill project) and cerebral (as he ably proved before in his new translation of Brecht's Life of Galileo and which had a Rullsenberg review in March 2013). Optimism is in contrast harshly slain and interrogated, and rightly so. 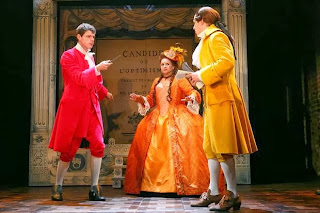 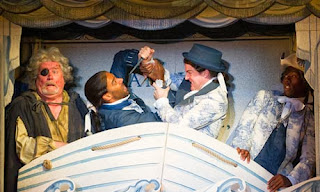 Like the novel, it is both disturbing and provocative.  The violence in it (especially in the 'Sophie's party' sequence which brings the problems of optimism into the present day) is archly beautiful, with streamers of red ribbons exploding in slo-mo strobe-lit style like so much blood and guts.  It is black, and red with political destruction.

Am struggling to embed the video but try this RSC Cast interview for Candide.

We both loved it and found it a stimulating (and brilliantly short) play - it rounds off well inside 1 hour and 45-50 mins (Matinee kicked off at just after 1:15pm and we were out by 3pm),

Heartily recommended and runs until 26 October 2013 at the Swan theatre, Stratford on Avon.

The Folk Festival at Derby has been around for ages, but we've only dabbled in its glories.  It was a big ask to drag my poorly foot to Derby yesterday, but despite the pain it was worth while.  I'd have liked to have fitted in Leyla McCalla for today (Sunday) but I don't think I'll be able to walk the rest of the week if I drag myself out and about for another day before work,

1) April Verch band
My word, this woman is talented.  With Cody Walters and Hayes Griffin to accompany her, the band create a glorious bluegrass sound, and so much more.  Her singing is one thing, but her feet and fiddle-playing are quite out of the world,  She twirls and taps, and she can even play the fiddle at the same time as a real highlight.  A live act treat, but a sound worth pursuing.

2) Melrose Quartet
(Or the Marmosets as I kept calling them in my head - no, I don't why)

Apparently of serious folk royal blood stock, from the UK and Australia, these offered four part harmonies of breathtaking quality and musicianship of the highest order.  I felt giddy by the end of their set - especially as the band will be taking a break now for at least 6 months whilst one of their number gives birth (with just 4 weeks to go when they performed last night, there were the obligatory warning for the tables nearest the stage to practice 'catch').

3) Dervish
The headline act didn't come until about 10.30pm at which point if we had wanted to catch a bus home, we'd have already have had to leave.  Never mind - a taxi ride was worth the wait.  An Irish band of great talent with a crackingly characterful lead singer in the form of Cathy Jordan, whose tales and between-song banter was delightfully entertaining.

With April Verch happy to come up in front of the stage to demonstrate again her deliciously fleet-footed tapping skills, the evening ended with happiness clapped around the venue.  I'd have danced if it wasn't for the fact I can barely walk...

Posted by Lisa Rullsenberg at 12:06 pm

Nice that you have so many activities that you can attend - we only have the big 'professional' shows here in this town.

It is a real benefit to living in the UK. I do envy the wealth of treasures friends can access who live in/close to London but I do get there occasionally and realise that what we can see is still a great range.