So, this has been my third big event with BeVox: 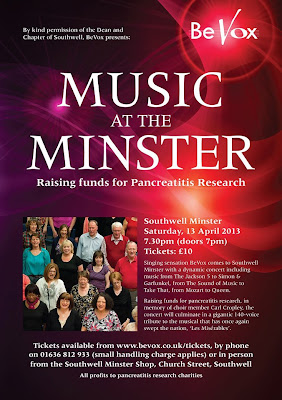 It was quite an experience: there is SO much to consider when doing an event like this, and how Timothy Allen (our choir director) managed to co-ordinate everything with so many people is mind-blowing.  Being part of the choir - even as a relative newcomer - I've seen first-hand the upheaval that the choir has had to cope with this season (see Tim's post 'A test of what BeVox is Truly About') and for Tim to have kept going and kept *US* all going is a great credit to him.

But co-ordinating an event like yesterday requires immense attention to detail and teamwork, so thanks go not only for Tim's co-ordination with all the following, but those individuals and teams as well:


You can get a bit of a flavour of the concert from this video: I wish there had been more video taken as it would have been lovely to get more of this event out there (you just miss the first bit of Tim's opening Swahili solo here).

(FYI: I'm on the far side away from Tim, four rows up with a blue scarf that looks larger than it was, one person away from the rails at the side of our seats near the pillars).

The running order for the “Music at the Minster” concert:
INTERVAL

The concert was a big deal for everyone but especially the Nottingham singers taking part: the event was to raise money for pancreatitis research, in memory of Carl Cropley, one of the singers at Nottingham.  Carl died from this horrible illness just as I started going to the choir - pretty much the first circulated email I got when I joined was about his death.  He had friends at the choir; he was much loved by the choir; and he had been an integral part of one of their biggest events - creating a film for their large scale performance at Magna in Sheffield.


But most importantly, he had met his partner at the choir.  You can imagine what that impact that had and still has.  Carl only a sang a solo once with the choir - and it was "Stars" from the medley of songs from Les Miserables that Tim had put together.  The medley is an emotional rollercoaster anyway, but to hear Tim take over and do the full-length solo of "Stars" in Carl's memory.... *exhalation*

...and for the performance at Southwell, I was stood next to Carl's partner who still sings with BeVox.  Despite all of Tim's advice that we should, could and probably would need to let go of our emotions, I felt I just *had* to hold it together.

Did I say that Southwell was nigh full?  People were having to sit on the seats down the side of the Cathedral as all the seats in the central aisles were full.  The event raised over £3000 for the cause, well worth doing.  I was knackered by the end but I hope everyone got as much out of it as I did.

Oh yes, and if you want a flavour of the Les Mis medley, then the Wakefield branch of BeVox did a cracking job (including the choir version of "Stars") at their own end of season concert.


Now if Tim would just bring back Radiohead's "Creep" to one of the upcoming performances, I'd feel that I have caught up on some of the best bits missed from previous seasons (since the Les Mis medley was one of the ones I had felt most gutted about missing doing when I belatedly joined in!)
Posted by Lisa Rullsenberg at 1:41 pm

Wow - that is a large group. It would take some coordination. With your background why don't you volunteer to help with that part of it as well?

Ha! My abilities at organisation strecth only as far as the individual - not to a group! I can barely co-ordinate my own body, let alone tons of others!