I've ducked from much of the news coverage, and taken in only a glance of remarks on social media.  'It's pretty torrid out there' seems a sufficient description of the atmosphere. 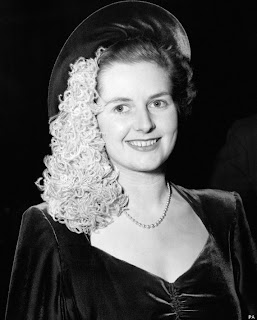 Old lady, sad, lonely and very unwell, dies alone in a hotel (it's unclear whether either of her children were with her when she died from a stroke).

That's clearly, on a basic human level, pretty horrible as a way to die.  Those who were friends and family will clearly want to, and should be able to, mourn her death.

Moreover, acknowledging someone who dies in a hotel, sad, lonely and unwell, as something that shouldn't be celebrated


is just basic humanity. But I will not confuse that basic humanity with mourning, which is an entirely more intimate emotional reaction. I'm not gloating but this is someone who made the experience of dying alone, the poverty of existence, something that became embedded in the way her social policies affected people (this and other quotes from my Facebook posts).

Mourning is generally something I believe is for those who KNOW someone: I would be sad if someone I thought wonderful, talented, culturally important died, but I wouldn't feel entitled to mourn and nor would I expect others to agree with my response or dictate my response.  Others can mourn if they want to; but equally I don't want to get into a contest about appropriate behaviour and 'respect':


That she formulated and implemented policies and attitudes that left so many people to die in far worse circumstances than she did (whilst similarly sad, lonely and unwell) is what minimises my empathy for her situation. She died living in a hotel paid for by the tax-dodging Barclays Brothers.

She's apparently also going to get a ceremonial funeral at taxpayer expense (at least thank HEAVENS not a state one).


I wonder how this will be policed? I'm in the 'not mourning' camp (minus any unnecessary ghoulish cheering) but it isn't hard to see that the divisiveness Thatcher has created is likely to lead some numpties to fancy a day out chanting. Can I put out a plea for people who feel strongly to NOT be anywhere near London when it happens and to NOT feel the need to yell and be stupid? A mass LACK of banners and provocation of mourning right-wingers would be REALLY appreciated. It's only adding to the cost to us the taxpayer and frankly she isn't worth it.

I know there will be those singing "ding dong the witch is dead".  I understand that reaction even as it makes me wince.  Glenn Greenwald's notes about the etiquette of grief is worth reading at this juncture, since it provides a valid context for why we can't necessarily expect an homogeneous response, even as its wildest excesses may be personally distasteful.  And chiefly that is because however brutal the criticisms, there are plenty who do come to praise Thatcher in the wake of her forthcoming wake.  All voices should to be acknowledged - criticism and praise.

And I will freely admit to being one of those who still think that an early 1990s call for epitaphs for Thatcher's grave was most ably served by the line "Licensed for dancing".  It limited the bile whilst still capturing the need to challenge the usual hagiographic memorialising around any public monument to her.

But mostly... mostly it's important to remember how little differentiation there is between Thatcher and current Tories.  There is much still to be active about and still to challenge as wrongs in society (on this day when yet more changes to benefits affecting disabled people come into force - a subject worthy of another post in itself since there are insidious problems with this and other changes).  Harking back to the past of Thatcher and making her chief bogeywoman is only part of the story because her legacy lives on in ways that are far from positive.


I find it very interesting how commentators point to the current Tory concept of 'The Big Society' as evidence that modern Tory belief differs from Thatcher's belief of 'there is no such thing as society'. Cobblers: they're both about the state having almost no role in supporting those in need. Whether you're being expected to help yourself in an individual way (Thatcher) or helping yourself/communities from amongst small groups (Cameron) it's still about reducing the role of the state as a safety net. We've gone back to Thatcher's beloved Victorian Values about the deserving and undeserving poor. We have a reintroduction of the Poor Law in all but name: charities having to make 'do you deserve it?' decisions on an ad hoc basis. No real change at all.

Moreover, it is worth remembering all things that Thatcher did that created the atmosphere of hatred which now - as it did in her lifetime - spirals against her: social and economic misery and division of neighbour against neighbour, the destruction of social housing and of the manufacturing base of the UK, the selling off of national assets enabling the rich to get richer, the deregulation of the banks that underpinned the banking crisis of 2008.  She was a friend to Fascists like Pinochet and described Nelson Mandela as a terrorist whilst blocking sanctions against the apartheid regime of South Africa.*

Understanding these things does not excuse gloating. Analysis and considered critique are always better. But emotions run high in the wake of any death, on all sides of the political spectrum.

I lived through Thatcherism in a city that felt the negative impact of her policies harshly.  I cannot claim neutrality even if I have no desire to jump on the many gleeful bandwagons of 'celebration' about her death.  (I can never believe that 'celebrating' a death in the way some are doing is constructive ---- I can see how it may feel cathartic for some, but I can't do it myself and I don't feel able to condone it either).

Some - trying to be 'respectful' - note her passion for Britain, her defence of the Falklands, and those old chestnuts that women are especially supposed to feel grateful for: Thatcher being the first woman Prime Minister of Britain and her having risen from 'lower middle-class origins' to Tory Party Leader, The critiques of the first two will no doubt be part of the maelstrom of comments over coming days, but it's those last two where I'd make a personal categorical refutation of their importance: Thatcher didn't just pull up the ladder once she had climbed up, she practically destroyed it by putting in place policies and beliefs to undermine women in countless ways and embedding economic divisions that still cut into class issues today.  A personal belief on my part and today is not the wrong day to be making a statement of it.

* Bizarrely, many of these points were noted by - of all people - Terry Christian on Twitter.  I hate the tone of some of his points but they're all still valid.
Posted by Lisa Rullsenberg at 10:17 pm