With a friend working in the world of theatre, I've known for many years of the brilliance of Matthew Bourne's dancing and dance companies.  Yet somehow, despite having done ballet briefly as a child, I'd never actually been to see a ballet on stage.

Sure, I'd watched my fair share on TV, and *adored* the TV series 'The Agony and the Ecstasy' that focused on the English National Ballet company.

But Matthew Bourne's 'New Adventures' production of Sleeping Beauty: A Gothic Romance was my first live ballet.  Well: if you're gonna start late, start at the top.

It's beautiful music (more on that later), the dancing was bound to be sublime, and the setting (Gothic!) promised everything I could want to see.  You can get a flavour from this promotional video.

Sumptuous hardly covers how beautiful this production actually is - the costumes are spectacular  and the colours of the costumes alone were a feast for the senses. (I definitely wanted to raid the wardrobe room several times over - fairy frocks, elegant Edwardian dresses, dramatic red coats). The sets and backdrops are also superb.  Sunsets over grand houses, statues, wrought iron gates, bedsteads from a by-gone era: all created with such attention to detail you wanted to walk - or rather dance - among them. 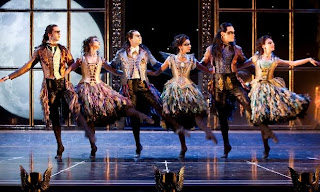 We were lucky enough to have Hannah Vassallo as Aurora and Chris Trenfield as Leo, and they were ably supported by the rest of the cast, including a terrifying performance in the role of the dark fairy Carabosse (and as her son Caradoc) by - I believe - Adam Maskell on the night I saw it (The cast obviously rotates and I stupidly forgot to note the casting for Wednesday).  The dancing was breathtaking - such variety of styles, movements, leaps and grace.

So: I loved it.  It was the most magical experience I could have hoped for and I felt electrified by everything about the show.  The show tours on to Wimbledon, Liverpool and Bristol after it finishes at Nottingham tomorrow, but I would have to say that unless you've already booked, you're unlikely to get a ticket.  It was PACKED at Nottingham.  Look out for future performances.


Final note: music and audiences
Whilst to my left I had the most lovely elderly lady with some of her family, on my right I had Mr Grump of Grumpsville who persisted in complaining about how loud the pre-recorded music was for the production.  He insisted on bending my ear at the start and end of the interval about how unnecessarily loud it was and how he had complained to no avail about the sound levels.  I get that everyone has varying degrees of sensitivity to noise and crescendos (he already had earplugs in), and he was clearly very unhappy about it.  But as a note to future visitors to anything, please do not feel that you have a divine right to everyone agreeing with you.  It was ultimately exhausting to try the 'smiling and not really nodding' to this gentleman who clearly thought the sound was so obviously a problem that it was inconceivable that anyone would not feel the same way.

Oh yes, and whilst we are on the topic of irks, can people please SHUT UP when the show is underway?  I don't need your running commentary conversation with your friend about the show drifting across the rows into my ears.  That was far more of a problem in the first half than the music levels ever were!

Posted by Lisa Rullsenberg at 8:54 am