I'm being shamed in attempting to do more blogging.  And I appreciate it - really I do.

The Life of Galileo - RSC
We booked for this back in January and I was really pleased to get tickets as Brecht is one of our favourites and Ian McDiarmid has such a great voice and presence. 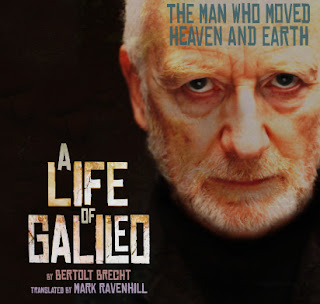 In light of the fact there was a new Pope being elected whilst we were in Stratford (we missed the news being announced before we entered the theatre), there was just something really apt about this engaging exploration of science and religion, about authority and compromise, about education and expectations. Thankfully someone checked their phone when I was waiting to leave the building at end of the play and announced 'there's a new Pope!' which was a good prompt for us to listen to the news on the way home!

The cast were great, especially McDiarmid, who really brings the awkward character of Galileo to life.  Mind, I could listen to him on stage forever.  Marvellous voice. People only knowing him from Star Wars doesn't do him justice, and I was really thrilled to have seen him on stage.

In a new translation by Mark Ravenhill (I'm not sure how much he went back to the German - I'm hoping someone can tell me that it WAS an actual translation), the play brings new life to this complex play which deals with politics, belief and exploration. It has an interesting history in terms of how Brecht himself rewrote it light of historical events, not least the collision of science and warfare post-Hiroshima.

I've enjoyed reading a number of pieces surrounding the play, not least this from the Science pages of the Guardian, and this review from the New Scientist. I had kept myself back from the reviews until we had seen the show (as I tend to try and do), they've mostly been good which is always nice.  Brecht is never JUST about what the play's subject ostensibly is, so they always seem to come up fresh.  There is just something about seeing a Brecht play that is always rewarding, though the version we saw of The Caucasian Chalk Circle was still a highpoint (even if I was lurgied on first attempt).

Of the reviews, I liked this one in the Guardian by usual suspect Michael Billington, though I would counter his claim that the linking passages didn't work in 'ye popular beat combo stylee'.  Billington can be a be of an old fart bless him.  We thought it an entirely appropriate Brechtian device, drawing attention to the nature of it being a play.

Jodie Mcnee has a thankless turn as Galileo's daughter - a role that doesn't really do anyone any favours.  But she is very good - as she was in Measure for Measure last year.  I picked up a copy of Dava Sobel's book to try and get a different perspective and I am looking forward to reading that.

Right - one blog post done.  I'll try and do another tomorrow!


Posted by Lisa Rullsenberg at 5:49 pm