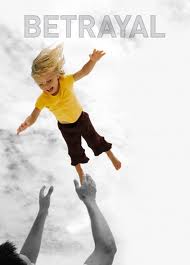 Perhaps there is something different about older plays - I'm thinking of Shakespeare specifically here, but there could be arguments for other authors too.  Is it just because these plays are older, because we are likely to have seen multiple versions, that we are more accepting of difference as difference between productions?  That with Shakespeare we are less tied to the evaluation of productions against each other, as if they are in competition?

With such points in mind, I feel ambivalent about writing a review of Betrayal at The Crucible, Sheffield, as directed by Nick Bagnall and designed by Colin Richmond.  The production comes hard on the heels of three delightful visits last summer to see Ian Rickson's production of Betrayal at the Comedy Theatre, London.  I wouldn't dream of comparing so easily the various productions of Hamlet I have seen across recent years: all different, all valuable in their own way.  Yet, in trying to comment on this latest version of Betrayal, I find myself making connections to my experiences last summer at every turn.

Apologies if you don't already know the narrative, but as the second review on this play in less than a year, I'm hopefully not spoiling anything too much.  It's a reverse chronology, from long after the end of an affair to it's first flush nearly a decade earlier.

Firstly, I loved the staging here.  With its clear circular floor on the thrust-stage of the Crucible, showing the detritus of life, love and affairs (confetti, letters, albums) under the feet and furniture of our three core participants, this set is an elegant depiction of the environment of the characters.  The furniture present is limited; the backdrop stark.  Everything feels slightly unhomely (not quite in a Freudian sense of unheimlich, uncanny, but certainly distinctions between environments is blurry).  This suits the dislocated tension about what is home, love, loyalty that informs the characters' actions.  When we hit the near mid-play conversation between Robert and Jerry at the restaurant, the stage slowly rotates.  It is an action that visualises the thrown off-balance moment in the affair and allows the audience a moment to observe the power relations between Jerry and Robert.  They circle each other, but only one of them really knows they're doing so.

Sound and music too feel suited to the staging: the awkward squeaks of a guitar - shades of John Williams - stiltedly accompany the relentless realisation of how everything is connected, everything unravels, even as the narrative moves to the start of the chronology.

Costuming has an observable but light-touch 1970s feel without over-stating everything.  I missed the 'Life on Mars' style sideburns and machismo of Ben Miles' portrayal of Robert (which definitely channelled the spirit and presence of author Harold Pinter himself), but appreciated Colin Tierney's looser style and his late-1960s belated mop-top fringe worn in the final scene of the play.

But I'm already slipping into that comparison mode. So here goes.

Tierney, of whom it took me about 15 minutes to click he had been last seen by me as the "dissolute Loevborg" in Hedda Gabler, certainly conveyed a watchful malice as Robert.  But Tierney's anger felt manipulative rather than violent, emotionally distanced and then a tiny bit heartbroken rather than calculated and malevolent in his provocation of Emma confessing her adultery. 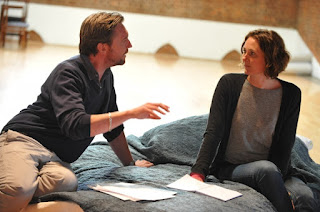 Miles, in contrast, bristled near constantly with an explosive fury.  It is worth noting that the reason why Emma and her former lover Jerry meet again, two years after their affair ended, is that Robert had revealed that he too has been having an affair for many years.  One almost gets the sense that in Ben Miles' depiction of Robert, that affair happened less out of desire than out of righteous indignation, a reassertion of his own virility rather like the venting of ...well, everything, that comes through Robert's squash-playing.

As the wife and lover, Emma, Ruth Gemmell has an incredibly difficult job to do and one which she pushes hard to capture.  This is a woman who captivates the heart of her husband's best friend, a woman who - by implication at least - has continued to have affairs after that one ends.  Gemmell's portrayal conveys a sense of wounded observation of her own life, as if from afar, even when she is the centre of attention.  Even at her happiest, there is an uncertainty to the joy of her affair with Jerry.  In that key final/first scene when Jerry declares his love for her, she looks bemused as if already unsatisfied by Robert.  We never really get to the heart of her Emma and why she takes up the offered love of Jerry and ends up in that 7-year affair.  Her reasoning, her decisions remain enigmatic.

This feels like a clever way to play Emma, but I don't know if it is the way that makes the most emotional sense for me.  And Gemmell is in such an invidious position trying to play against my vivid memories of a luminescent Kristin Scott Thomas.  KST is in such another league (both in terms of acting and beauty), that it unfairly diminishes the well-balanced performance and grace of Gemmell.  What KST brought to the role was a greater sense of Emma's own emotional heart, and her own ability to lie and betray (remember that Emma lies in that first scene, implying, stating, she had told Robert of the affair with Jerry only on the previous night).  At the start of the chronological narrative, that final scene of the play - KST's Emma is swept off her feet by Jerry's declaration, attempting to laugh it off even as she finds herself ultimately tempted.  There was a greater sense of risk-taking in KST's portrayal.

And so to Jerry, portrayed at Sheffield by a boyishly ebullient John Simm.  If there is a wounded joyless-ness to Gemmell's Emma, then all that joy is invested in Simm's scarcely adult Jerry.  His take on Jerry is certainly unable to embody the manly power and authority, the easy lying of Robert.  Moreover, Simm's Jerry seems equally unable to process the fallibility of memory and truth highlighted by Emma (the anecdote of Jerry throwing Charlotte, eldest daughter of Emma and Robert, up into the air is twice wrongly recalled by Jerry as located in the Downs' kitchen rather than Jerry's own).  Simm presents baffled smiles, realisations that seem incompletely processed and absorbed; his actions and guileless ignorance of the blindingly obvious appear the act of someone scarcely properly advanced from the trusting belief of childhood.  He inhabits the Pinter pauses with bewildered charm.  But for all the deception inevitably required for an affair, Jerry's faith that he and Emma's ability to conceal had been "brilliant", is misguided in the extreme.  The start of the affair looks more an act of wilful pursuit of pleasure than an unburdening of passion. 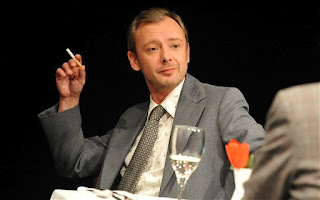 And this for me was what kept this production in a place where I could not help comparing it with last year's and not to the Crucible's advantage, for all that I enjoyed this latest version of a compelling play.  Simm was probably the best thing about this version, but he just could not compete with Henshall's performance as Jerry.  I've said it often, but Henshall is masterful at conveying a real sense of impassioned emotion.  Where Simm captured disappointment (as when Emma and Jerry part from their flat in Kilburn), Henshall embodied an overwhelmed sadness and loss.  And in that initial declaration of love to Emma, Henshall's words tumble in a torrent of dam-bursting reckless passion.  Henshall's Jerry is as ignorant and deluded as the role requires, equally well-caught in Simm's expressive boyish face, especially his eyebrows.  But Henshall's Jerry is more of a grown-up, more astonished, shocked, and mortified than Simm in his realisations of being betrayed by his own emotions and recollections.

Even so, despite my honest feelings about last year's London performances (biased as I am over Henshall), everything I say about the Sheffield production still feels a little unfair.  Because it is a fine, very fine production, and the performances - especially Simm's - are very good indeed.  It's just that in the end, in a play about hearts, my heart moved a little more last year at the flawed optimism and passion infusing the Comedy Theatre version.

I'm jealous: I've only ever seen the film version (Ben Kingsley/Jeremy Irons/Patricia Hodge), which I loved. I keep hoping it will come out on DVD (or be retransmitted some time when I can record it myself).