Bradford - city of LURVE (and the National Media Museum)

Last week we used our day off together to got to the National Media Museum in Bradford.

We had intended thought about but were too late in planning/booking to go to Paris for a long weekend. Instead, we opted for Bradford.

Bradford - city of LURVE.... (or as Neil kept saying "We'll always have Bradford")

Anyway: we had a lovely day. I read Kristin Hersh's excellent memoir 'Paradoxical Undressing' (1) on the train journeys, and we had a fabulous time in Bradford itself.

We'll gloss over that they since seem to have elected a self-serving celeb to represent them in parliament. 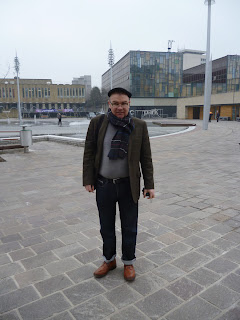 This is Neil in the City Centre before the new City Pool was flooded (we wondered why the fountains seemed a bit weird...) 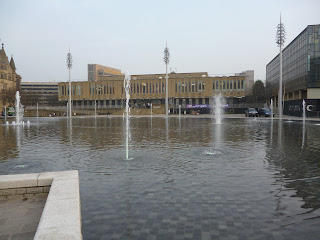 We had mainly gone for the Media Museum, which includes film photography, TV, animation, illusion and more - it's well worth a visit!  lots to see and do, and the chance to go in a booth and watch any from a selection of a couple of thousand TV programmes!  We didn't feel we could spare the time and wanted to look around the exhibits instead which include a history of television sets and a studio you can work cameras in!

We made it to 4.30pm before we bought any books: then we found the Wool Exchange branch of Waterstones. Hey ho... What a great building! 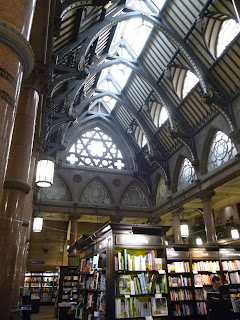 We then, of course, had a curry.  Well it is Bradford!