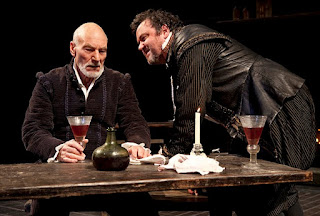 Erratic reviews have been thrown at this awkward play - from 1 and 2 stars to laudable 4 stars. It's pretty easy to see why there is this diversity of opinion, though I'm not convinced the loathing is deserved. For me, it didn't feel like anything less than 3.5 at my least charitable about the play's premise and probably a 4 given the performances.

The thing is that Bingo is a play ABOUT Shakespeare rather than by Shakespeare - there's one whole job-lot of expectations going to be thrown for a start.

Beyond that, in some ways, it isn't even as explicitly ABOUT Shakespeare as the writer - it's set in Shakespeare's latter days in Stratford, past the point of him actively writing plays (and certainly the 'great' plays). It isn't an exploration of the life in the way that (say) Simon Callow's 'Being Shakespeare' works - in that instance, the audience gets lots of crowd-pleasing quotations of best-loved lines and passages. There is almost nothing of that in Bingo. Problem number two.

Additionally, in many respects, the pre-interval act particularly could be about any land-owning, doubt-ridden older man, frustrated at his living arrangements, powerless to see how to change them, and torn between self (and self-pity) and empathy for the local community in a time of social upheaval, and against a backdrop where religion and attitudes to morality and poverty have been rattled about for quite some time. There's another problem.

But this nevertheless IS Shakespeare and part of the reason why he succumbs to the plans of enclosure that will benefit him but negatively affect his neighbours is likely tied to his own financial insecurity in earlier life (what little we know of Shakespeare senior is a falling off from temporary power and authority into ignominy and insecurity). This does not however make for comfortable viewing for those who want their Shakespeare to be a straightforwardly humane writer, let alone the relatively god-like figure of eloquence he is held up to be by Callow's one-man extravaganza.*

Above all, this is a play by a Marxist with avowedly Marxist themes and characterisations and whilst I personally have no problems with that at all, 2012 - all that cultural Olympiad nonsense being thrown about - is perhaps not a great moment for a 1973 play on such lines to woo audiences to depictions of Shakespeare amidst his servants railing 'was anything done?' in regret for his inaction to do more for the poor.

Bingo therefore makes for uncomfortable viewing - it is not a play presenting easy, enjoyable thoughts and reactions or even easily managed philosophical debates (even the most awkward of Shakespeare's own plays don't hurt their audiences psychology in the way Bond forces his to be hurt). It is a harsh and awkward play, with harsh voices and difficult characters hurt by and causing hurt in unequitable times - there is little that is lovable, likable, and nothing laudable. Only drunken Ben Johnson (and dizzingly cantankerous Richard McCabe berating Shakespeare 'but what are you writing?') brings any kind of light relief and he's hardly a beacon of positivity.

I read the excellent James Shapiro's book 'Contested Will' a while back, and I've become rather drawn to its analysis of how the Shakespeare-worshippers were a goodly part responsible for generating the 'Shakespeare wasn't Shakespeare' crap that has been flying around the last few centuries (I'm not watching 'Anonymous' however much you pay me).

It therefore strikes me that as well as carrying Marxist baggage, there is an element of audiences perhaps not getting on board with the character that is 'Shakespeare' being portrayed in a negative (or at least non-positive) light, as irredeemably confused, angry, cruel and frustrated by coming to the end of his life. This is not the Shakespeare they expect and he's too tied to being 'Shakespeare' to be viewed as A.N.Other person of the 1600s. 'Was anything done?' applies not just to Shakespeare's action/inaction over matters of class and poverty but a doubt about his own worth overall - are the plays and poems worth anything if family life can still be miserable, if the poor still starve and the 'rich' can exploit their power? What could have been done to make life better?

Perhaps my personal empathy for the play and the production were also tied with the experience: HLW and I were with my colleague Caroline, a long-term admirer of Sir Patrick Stewart who took the lead role. Sat on row C in the stalls, it was a giddyingly close experience and we may well have felt more out of sorts with the play's tone if we'd been sat further away. Additionally, I'm not easily put off by Marxist intentions and topics: I'm an insufferable old leftie at heart.

And the cast were very good and intense at what the play required them to do - Stewart is unsurprisingly excellent whether delivering lines or simply letting his expressive face communicate his isolation, and McCabe's small role is delivered with characteristic gusto. But in various ways the rest of the cast also deliver the goods, from Ellie Haddington as the housekeeper/confidante to Shakespeare, to Alex Price** as her moralistic son leading the campaign against enclosure. Catherine Cusak has a horrible role to play as Shakespeare's daughter Judith: taught enough to know there is more to life, but not able to break free of home, she lurches from righteous indignation and frustration at her father to lonely despair at managing her mother and father's separate lives. It's a thankless part in a pitiless play where no-one comes out feeling good.

Does that make it a bad play? No: it perhaps makes it a flawed and definitely an awkward play, but not to my mind itself a bad play.

* Don't think I don't like Callow's performance or Bate's script for 'Being Shakespeare': H and I loved it when we saw it in Sheffield a couple of years ago. But it is much more of a crowd-pleaser.

** Yes, he DID play Francesco the vampire fish-man in Doctor Who.
Posted by Lisa Rullsenberg at 1:25 pm