Could this be the end of the Sitting Tennant caption competition? 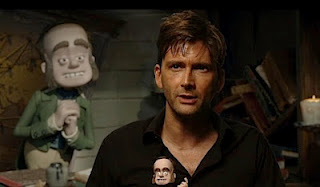 Sitting Tennant - a regular feature over at The Medium is Not Enough - started in jest (sort of), got very serious at some moments (well, as serious as something inherently daft can do!) and spurred some of the great caption writing to some of our most brilliantly enjoyable pictures of David Tennant sitting down. I have, on occasion, been known to do pretty well myself at the game(s) of ST, including 2011's competition. After a slow start in the captioning stakes - and a growing realisation that I could not keep up with picture hunting - I settled into providing a regular source of smut and silliness to accompany the great array of images others provided.

But now it could all be coming to an end.

Only the picture competition may be able to continue to please the eyes.

With this possibility in mind, I've gone back to the original source of inspiration - the great Rosby and Marie communications of yore and especially the songs.

Apologies to everyone concerned: I know I can't hit the heights they reached:

"And now, the end is near,
I've taken up, with cloning puppets,
my friends, it's all so clear
the moments passed
you all are muppets
I've lived a life that's full
I've sat down oft
along the by-ways
you've captioned me
but now no more
it's pictures only -- for ST

For friends, we've had some fun
with those now gone to new adventures
Rosby, went off to learn
there's more in life than sitting tensions
And those who gave me words, who gave me lines
too rude to mention
ah yes, damn Rullsenberg
I'm blushing my way"

Well, thanks everyone for the company: it started as a jest, a response to a plea, and took on a life of its own (even getting mention in the Guardian along with other key features from our great host). It's been a blast and if this is the end, then I thought it was only fair to go out on a high.

"For there were times
I'm sure you knew
when Toby's knowledge of Doctor Who
made captions more than just mere smut
from Sister Chastity and all you lot
Ah Marie
What did you start?
When they cast 'Gods', it broke my heart
For I was sure, I was the one
for all of you, who wrote a song
who gave me lines, daft and perverse
Who read a pose, and made me curse
But now it's o'er
the captions done
And I can't make you all go on
But it's been fun
and there's no doubt
that this has been
the greatest shout
from fans who thought
that sitting down
was a fine prompt
to wit round town
the record shows, you all took blows
and did it your way...."

[with humble apologies to Paul Anka, Frank Sinatra and the original writes of the tune for 'comme d'habitude' which I am sure my memory has mangled]

It's been great fun and the changing community of contributors - both in picture and captioning - has provided much fun to many people. Thanks to everyone and if it continues.... YAY!
Posted by Lisa Rullsenberg at 2:57 pm

Labels: David Tennant, Sitting Tennant, The Medium is Not Enough

Did you hear him with Emilia Fox recently on Radio Four in "Love Virtually"? Fantastic piece of radio drama rendered unforgettable by two fantastic performances.

It was stunning Rob - a glorious piece of radio.