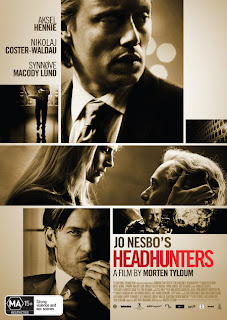 Although we've diligently read the Harry Hole books of Jo Nesbo, from 'The Redbreast' onwards, we'd not gone back and read Nesbo's earlier fiction such as 'Headhunters'.

I'm tempted to see how it now compares, because having found the film a joyous revisitation of the best of the early Coen Brothers films - especially Fargo - I'm keen to see if the book has half the black humour and bloody verve of the film version.

For those who think that the world has been a little short of farce, brutal violence, and dislikeable characters becoming 'rooting-for-em' heroes of empathy, then Headhunters is for you.  Busting genres with gleeful abandon, it switches from art theft, to corporate manipulation, with crashes, cesspits, webcams, guns, knives, tractors, trained-to-kill-dogs and everything in between. 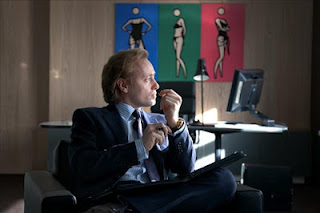 I laughed out loud as often as I hid behind my hands at the blood, but it was well worth it.  Don't fret that for the for first 15-20+ minutes you want to slap the greedy, self-important Roger Brown (with a height complex), pretty soon you'll be hoping his sorry ass survives the psychotic violence that ends up tracking him through cars, hospitals, and hoodies.  It's a mad ride, but utterly enjoyable.

Skip watching the trailer (as ever, I think it gives way too much away) and just go and revel its its excess.  A total blast.

Bonus point: the film has a running time of a brisk 90 minutes.  Brilliant!
Posted by Lisa Rullsenberg at 1:15 pm