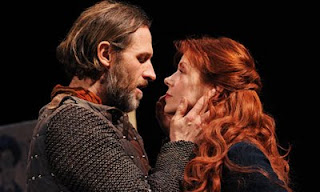 Cloud's remark when we came out of this play possibly suggests a harsher review than will follow. Certainly, although the narrative is ostensibly one based on a follow-up to Macbeth (albeit rooted more in actual medieval Scottish history), you'd have to be pretty dim not to spot the analogies to present-day wars and occupations.

Nevertheless, this is not a one-dimensional sledgehammer of a play about the problems of Iraq/Afghanistan, particularly given its lively, sharp and incredibly funny dialogue and the excellent performances. This new revival of David Greig's 2010 RSC Hampstead theatre new play is ending a short tour from the National Theatre of Scotland in Stratford, having been on in Edinburgh and Glasgow earlier in spring/summer 2011.

Since this year is proving to be a rather expensive year for theatre-deficits induced by hot actors treading the boards in abundance, I also felt I should treat Cloud to some pleasure for himself. Having carried a torch for Siobhan Redmond since her days in Bulman and then Between the Lines, I couldn't deny Cloud the chance to have his own Scottish heaven (no, I don't know what it is about our house and its love of Scottish actors!)

Redmond is glorious as the Queen, Gruach, particularly when she plays opposite Jonny Phillips as the English Siward. The latter's eventual collapse into violent vengeance for his own succumbing to Gruach's clever use of power, and his own weak inability to ultimately overcome her, is sparkling to watch. Brian Ferguson's Malcolm - uncannily resembling Slinger's Macbeth actually, but a far more weasily King - is hysterical. A very sharp humour indeed. It always feels harsh to pick out specific members of the cast, but these three especially turn in spectacularly good performances.

The structure of the play, working around a 'letter to mother' from one of the young English soldiers, eventually permits an overall questioning of what we have seen through his eyes. The bawdy humour, the casual violence, the swearing, are as one may imagine a young boy soldier's view on life stuck occupying a seemingly desolate land far from home. The use of music is also astute, mixing a near pop sensibility of dischordant cello, with lively guitar and drums, with unaccompanied Gaelic singing by Gruach's maids.

Overall, a very engaging production - both as a follow-on to Macbeth and in its own right as a contemporary play commenting on the nature of power and occupation. It may not be (entirely) about Scotland, but it is no less worthy for all that.
Posted by Lisa Rullsenberg at 1:45 pm