Much Ado - visit number 2: doubt it will even prove to be the penultimate visit (if I can possible manage it...)

After the chaos of getting the collective hormonal hordes to the Much Ado matinee performance on Saturday 21 May, it was now 'take 2': me and HLW down for the weekend and meeting up with grandmother of the lovely girl we got to the stage door all the way back in October 2008.

Additionally, Poly had also suggested meeting up for lunch so it ended up with the four of us giddily lunching together, sharing the squee of Poly's visits this week (that's VISITS: plural, PLURAL... - honestly, Poly is a one-woman tour de force keeping the British theatre industry functional!). By the time Poly left us as our party of three headed into the theatre, we were all fit to squee ourselves to death. However, we were also plotting logistics since I had decided I was DEFINITELY going to try the stage door scrum this time around. Our visiting friend from Stratford understandably wanted to join us, but this was a hot day where the sun was beating down furiously, where there were multiple Transport for London closures and workings, where most of London's roads seemed to be in a permanent snarl up of traffic, and she would only have approximately an hour and a half after the show to make it to her train back. Yikes.

But of course, once in and enjoying the play (sadly we hadn't been able to get that odd seat to be together with H and I) it was hard to resist the lure of the door. Handily I had a seat at the end of a row so legged it promptly (and was STILL 3 rows back at the door: grr!) but I had no idea how our friend would get on as she had hesitated about whether to chance it.

It was pretty chaotic out there I have to say, and though I get that some had maybe waited a long while, when people arrived out of the actual performance to join the throng some of those in front of me could have been a little more gracious in their defense of their space (not for me I hasten to add, but for a young slender boy hesitantly stuck behind me whom I did attempt to sneak at least a little closer, only to be snapped down harshly with a "no he can't actually" ---)

Anyway: minor grumbles aside - and I think/hope the boy did manage (just) to lean over and get his programme signed - there were delighted squeals when David and Catherine emerged. Responding to every call of "you're gorgeous David" "we love you Catherine" with grinning cries from them of "thank you!" and "and so are you!" it was generally a jolly affair, though there was a bit of pushing near the end.

Oh did I not say? I got my programme signed with a nice wink from both David and Catherine (especially) as they did so, thank as well Tom Bateman and Sarah MacRae (Claudio and Hero), though I just missed catching the fantastic Adam James (Don Pedro). Another time I hope... 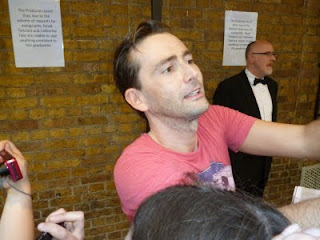 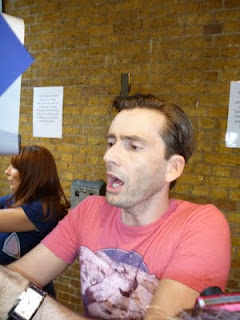 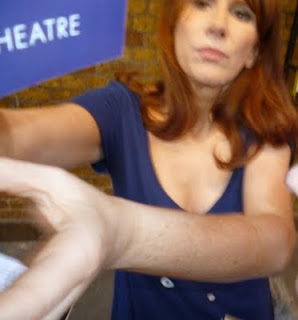 Considering I had NO IDEA where I was pointing my camera I thought I did quite well (even with the blurry shot of Catherine's fantastic figure: she's just stunning!)

And just when I thought things could not be more brilliant, I get to pick up a phone message from our friend: she was heading back to get the train home to Stratford... and had chanced the stage door and got both David and Catherine's autographs! *happy* *happy* *happy*

Truly, there is almost nothing so exquisite as helping bring about other people's pleasure! I hope it was worth the exhaustion and the physical exertion, but man it was a helluva day.

And for me and Helen, it wasn't even over...
Posted by Lisa Rullsenberg at 3:48 pm