Can I just say: Jasper Fforde - excellent and hilarious writer... and just a little bit hot. And I don't just mean in a 'blimey-it-was-30-degrees-on-Saturday' kinda hot (though it was). The picture doesn't do justice but he a rather ruggedly handsome man (how he is as prolific as he is whilst having a young/growing family is testament as ever to an incredibly understanding wife, and the honed skills of writing he learnt through 10 years of writings and NOT being published). 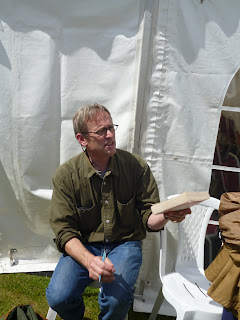 Fforde was in conversation with crime writer Stephen Booth (SB's a pleasant guy, but projecting your voice in a hot festival tent when trying to direct a conversation IS a difficult task). Fforde however is probably the sort of person who just needs a 'go' and he can engagingly talk anyway.

Nevertheless, there was an entertaining thrust to the discussion - not least as Lowdham inevitably attracts general interest visitors for its final Saturday events as well as 'chums' (Fforde's preference to the more dismissive term 'fans'). Of the audience perhaps a good third acknowledged not having read any of Fforde's work: I'd hope many went on to buy, read and enjoy some afterwards but there was a predictable degree of confused attempts to explain the real/fiction/bookworld narratives of Fforde's work! A dodo called Pickwick who goes 'plock'?! I'm sure it will make sense when they get into the stories... (and that's all before you get into the madness that is the Fforde Fiesta - the annual get together of Fforde chums in Swindon, home town to our literary detective heroine Thursday Next. Still there are fun pictures of Fforde at the Fiestas, including here).

Fforde originally worked in the film industry (incredibly, NOT in front of the camera, but behind it as a focus puller). He described the work as not much good for inspiring writing but good for carpet fitting. Most entertainingly, he explained how he would be responsible for making sure that Sean Connery didn't look like a bath sponge. Fforde can make the potentially most mundane of discussions and anecdotes sound engaging and although I'm sure he must do tons of these events he was utterly charming. It was also nice to hear his resistance to the idea of a film version of his books (instead recommending 'read the book and get your own interpretation of it", rather than in film where inevitably you get someone ELSE'S interpretation of the text). It was interesting to hear about the extra commas that US editions seem to demand. And we even got into a philosophical debate about the naming of names ("the name Jasper might actually be 'David'...")

Overall it was a real treat to hear him talking, and to meet him afterwards to get a book signed. I was put onto The Eyre Affair some years ago and have devoured his output regularly ever since (and re-reading too). What I hadn't picked up was Shades of Grey - to which I treated myself on arrival to get signed. Nice. And I read it within the weekend, being knocked out by its inventiveness and utterly gripping narrative and characters. Definitely looking forward to reading more of that series.

I know there is also a Thursday Next out (in hardback only at the mo, natch) but that will also be on my reading list as soon as it hits paperback. And I may just pick up the DragonSlayer book - first volume 'The Last DragonSlayer' - on the pretext we're getting it for James (nephew) who likes dragon themed books....

All in all a lovely weekend - and Lowdham was made extra special by having the company of Caroline and one of her daughters and her mum (the three generations of 'Anya' as they became known)
Posted by Lisa Rullsenberg at 7:23 pm