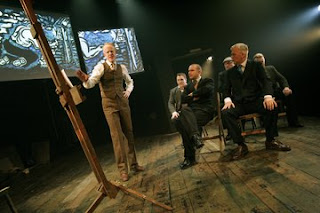 Sentimental? Oh most certainly. But in the best possible way.

The Pitmen Painters has been capturing audiences since it was first performed at the Live Theatre in Newcastle back in 2007. As a co-production with the National Theatre in London it then transferred there, before later moving to Broadway, and now The Pitmen Painters is back out on tour around the UK. I would definitely urge anyone who hasn't already seen it to go.

Why should you go? Because it's such an entertaining but also moving portrayal of working-class life from the early 20th century. It is incredibly funny, and - from the perspective of an art historian - it is also remarkably sharp about the class and economic relationships that underpin art practice, art theorising, art history, art education, galleries and patronage. William Feaver's book on The Pitmen Painters was the inspiration for Lee Hall's vibrant play, and I do remember reading this book when I was studying art history --- although I am astonished that given the play's success it is necessary to ask why this book is not more readily available...

The small group of actors in this play are a delight to watch (and listen to); the miners portrayed are fearsomely articulate, even where they struggle to express and comprehend the educated elites around them. They speak from passion and experience, even where they lack formal training, learning or even practice; there was an audible gasp from the (all-too-small) audience when we first saw one of their works produced for their art class discussions - because there is something stunning and beautiful and truthful about what their artworks communicated. An honesty.

By Hall's own admission, the play uses some artistic licence to articulate its narrative - limiting the number of players, amalgamating characters, eliding timelines and source texts (even the most dedicated of socialists was unlikely to be quoting Marx's writing from texts scarcely available, let alone in English). But this does not diminish the play's potency. And whilst some have complained at the heavy-handedness of the ending, for me it was deeply moving.

As the cast sing - and boy does choral singing like this move me - the backdrop displays the captions outlining what happened next: the University of Ashington that never happened, the closure of the pit and the hut, and ultimately, the loss in 1995 of the poetry and struggle that was the Labour Party's Clause 4:

To secure for the workers by hand or by brain the full fruits of their industry and the most equitable distribution thereof that may be possible upon the basis of the common ownership of the means of production, distribution and exchange, and the best obtainable system of popular administration and control of each industry or service.

Yes, reader: I let a tear fall for what was lost in that change of language. For what it symbolised as part of not just the Pitmen Painters' narrative but also of the bigger struggle for working class people. It made for a moving end to the evening, and I only wish that there had been more people there to appreciate the committed performances of this production.

The tour of Pitmen Painters continues on around the UK until 1 October.
Posted by Lisa Rullsenberg at 7:35 am