In praise of Thursday night telly

Educating Yorkshire (though it ain't a patch on Educating Essex, the original and the best)

The Sound of Cinema: the Music that made the Movies


It's almost like they WANT to make it clear this is the digital catch-up age: three excellent programmes all scheduled for 9pm on a Thursday (we missed the potential of The Guilty starring lovely Tamsin Greig, but it seems it wasn't worth the effort - that TOO was on Thursday 9pm).

BBC1 Peaky Blinders
Peaky Blinders is ludicrously stylised and heavily anachronistic in parts (although we're especially enjoying the soundtrack: you can't hate a programme that uses Nick Cave and the Bad Seeds' "Red Right hand" as its intro music).

The storyline is barking, the politics no doubt flawed and yet....

It is pretty irresistible   Murphy first came to my attention as The Scarecrow in the Batman Begins movie, and he's since cut quite a role for himself as mesmeric anti-hero types. 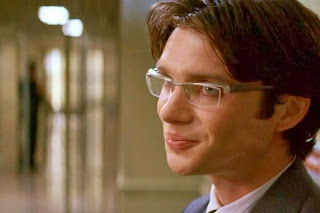 His character in Peaky Blinders, Thomas Shelby, will naturally head for a fall one feels (you want it to work, just as you want Aunt Pol, Helen McCrory, to keep slapping these useless blokes about the head), but you can't help rooting for him.  A real gem, slo-mo included. 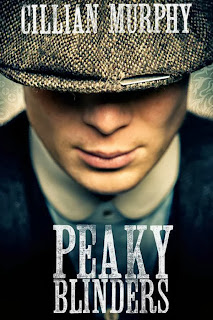 Channel 4: Educating Yorkshire
Well, it's not the glory that was Educating Essex - possibly the best advert for comprehensive UK education imaginable.  In contrast, the teachers, whilst well-meaning, seem less in control and take a very different approach to interacting with students (please don't claim it's a 'northern thing' though; that's just insulting to everyone).  I'd prefer ties that were properly tied, no shoes on the desks, and no swearing - even faux swearing - at students (it makes the infamous "clear off scumbags" in EE seem positively lightweight).

But the teachers and staff clearly ARE well-meaning, and managing teenagers is no mean feat for anyone to attempt.

Last night, was for me a key episode though, highlighting my personal weak points in these sort of programmes: the relationships between teenage girls.  I've been there, been on the receiving end of rumours, 'friends' setting people against each other, the stress and hurt and anger that goes with it.  I felt for both smart   articulate Hadiqa and the academically struggling but bubbly Safiyyah - both to a certain extent victims of the malice that can be 'the other girls in the group'. 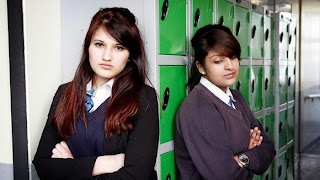 This was the first time in EY that I felt that sense of identification with the situation; something that felt much more live, more of a consistent undercurrent in EE even where events were outside my personal experience.  Young people with Aspergers? I understand that one.  Teenage pregnancy?  Nottingham has (had) an awful reputation in that regard. Frustrated smart teenage girls? Oh yeah. Family circumstances for teenagers that would break any stone heart? Seen it around me. Boys who can't control their anger?  Social media bullying?  Desperately trying to teach the attentive and inattentive simultaneously? Feeling overwhelmed at what you cannot control (among both staff and students)? Pass me the hankies. It's the same production team, so does the difference, that lack of my feeling empathy for both students and teachers in EY, to do with the show or me? I felt it in every episode of EE - recognising the situations, the dramas, the reactions on both sides of the desk.  With the Yorkshire show, it's like the desk is blurred and everything is more uncontained, less well-managed. It's really just to do with a different style of teaching and management, but somehow the flaws at Essex felt like things they were learning from and doing better each time they dealt with similar things. Essex set the standard with Mr Drew and Mr Goddard.  I don't think Mr Mitchell or any of the year heads have yet quite measured up as yet (though Miss Uren has come close, as has Mrs Crowther).

BBC4: the Sound of Cinema series
The Sound of Cinema: The Music that made the Movies has been presented by Neil Brand who is just the right combination of nerdy and knowledgeable, passionate about film and able to communicate it to audiences.  I am fascinated by the use of music in film so this series has been delightful and yet I have learnt things as well.  Wonderful treat.

Makes me want to listen to film scores all over again, whether orchestral scores or popular music soundtracks (did I mention I once wrote about soundtracks for 'Chick Flicks'?)

Posted by Lisa Rullsenberg at 1:34 pm

I hope these end up over here in the US - trying to view BBC things gives the 'only available in the UK' warning.

Yeah, sorry about that - we do have the same problem here with US stuff if that helps... I suspect PB *may* make it to BBC America / PBS, and likewise Sound of Cinema. However, EE/EY are I expect too parochial to make it elsewhere, and even the accents of PB may make it a tad difficult to sell (it shouldn't, but these things can matter).