Proof that musicals do not have to be jolly: Les Miserables - film review


As I mentioned in my pre-amble post, I have a ridiculous level of love, affection and recall for the tunes and lyrics of Les Miserables.  I have to say though that seeing the film (albeit that there are a few cuts from the original stage production set-list), I was amazed at how much I could remember of each section/song.  Seems a lot has still been retained in my long-term memory!

So what did I think of the film? 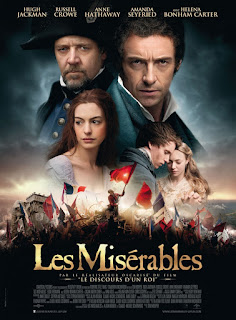 Things I noted (I'm going via characters as that seems fairest):

The ensemble
What I have always loved about this musical are the ensemble tracks - whether it is the counterpoint singing of individual characters or the collective vocals of the French masses.  Wonderful singing and performances.  If I can get through "tomorrow we'll discover what our God in heaven has in store" (from "One Day More"), when I sing with the choir I will feel very strong indeed.  Totally stirring stuff.  Spine-shivering even now.

Fantine
I'm not even going to be the 100,000th (even millionth) person to say this, but blimey - Anne Hathaway!  This was the performance of the film for me.  The role demands such range, and such emotional depth and she hit every note and nuance of the performance.  Didn't think anyone would surpass my reaction to Patti Lupone who was in the original London cast, but Hathaway was just incredible.  Pack up shop folks and give her the best supporting actress awards now. It understandably tears the audience to pieces from an early point in the film ("I Dreamed a Dream"), and the ending of the film is the final rip of the hankie.  Plot totally lost by that point.

Marius
Eddie Redmayne, although I got increasingly distracted by how his head and chin wobbled with the exertion of the singing, was incredibly good.  His performance of "Empty Tables" is beyond emotional.  Yes, in many ways better than Michael Ball.

Cosette
I though the child Cosette was fine - the grown-up one less so.  It's probably that I don't care much for the character.  Sorry Amanda Seyfried.

Eponine
I've picked up (post-seeing the film) that not everyone was convinced about Samantha Barks being cast as the grown-up Eponine.  She's a bit blank sometimes, but gets better as she goes through the film.  My chief complaint?  Unless I momentarily passed out during the movie, they cut the two pre-song stanzas of "On My Own".  I know it isn't the only change or cut in the movie version, but it was for me perhaps the one I felt most deeply.

And now I'm all alone again nowhere to go, no one to turn to
I do not want your money sir, I came out here 'cos I was told to
And now the night is near
Now I can make believe he's here

Since I adore this particular song (angsty teenage to 20-something when I first heard it?  of course I loved it) it would be hard for anyone to beat Frances Ruffelle's version.  Does Barks do it?  No - sorry.  She's good, but I'm utterly wedded to that original soundtrack performance.

The Thenadiers
It's a bit usual suspects to cast Helena Bonham-Carter and Sacha Baron-Cohen in these roles, but I thought them really rather good.  "Everybody raise a glass" indeed.

Valjean
This may go radically against reactions to the film, but whilst I thought Jackman made a very fine Valjean indeed - certainly in terms of the acting - he was marginally less convincing for me in terms of singing.  Very good indeed, but again he has a tough act to follow with the perfection of Colm Wilkinson's Valjean.  CW just broke glass and hearts with that perfect final note on "Bring Him Home".

And maybe the differential was highlighted by them (nevertheless, very smartly) bringing in Wilkinson to sing the role of the Priest who initially shows compassion to the fugitive Valjean.  Wilkinson's presence, yea even his gravitas dare I say, just blows the screen away.  Both Helen and I gasped and our eyes widened at seeing the older Wilkinson appear in this role, not having picked up the pre-movie buzz he was in the cast.  So by the time he reappears at the end of the film, we were both getting pretty wrung out.  Again, rather like the line from "One Day More", if I hold my voice together for the line "To love another person is to see the face of God" from Valjean's death scene, I will definitely deserve a cake after the performance...

Anyway: kudos to Hugh, it is a great performance in the film, but I wasn't carried away as I wanted to be.  I need to rewatch the film/listen to the movie soundtrack and get away from the original cast soundtrack.  That's gonna still be hard though with CW around.

Javert
Radical statement: Russell Crowe is not bad.  I know: it goes against the grain of popular opinion, and yes, Helen is a big fan but even she was unsure if he would manage it, since having seen the stage production she felt she was more wedded to the original than me.  Does Crowe succeed in this difficult and pivotal role?  Yes and no.  I think it's a darn fine performance from him.  Could it have been done better by someone else?  Possibly - but I'm unsure who (though obviously the magnificent Roger Allam is ingrained in my heart, alternative suggestions as to who would fit in the starry movie version are welcome).  Crowe's at his best when the drama develops - I don't think anyone comes off terribly well from the opening scenes actually; I thought it the weakest part of the film and everyone gets better from then on [did they shoot it in order?].

The problem is that the role of Javert requires more than the stoicism they clearly advised Crowe to adopt for the performance: it needs a fire and bitterness.  Mot 100% perfect by any means, but in the thick of watching the film, satisfying us.

The CGI/effects/cinematography
I wished that they had not done quite so much with CGI: and I know that on stage you can't do close-up shots, but I really wasn't convinced by all of the close-ups included.  But the big set-pieces of the staging are all there and wonderfully done.

Overall, by the end where they reprise "Do you hear the people sing?" it's hard not to feel rather emotional for the defeated - but not diminished - rebels and their cause.  Yes, everybody dies; yes, there's bloodshed; yes there is poverty.  But have you read the novel?  It is meant to be grim - but it also has an uplifting feel as well.  Heightened emotions are what musicals are all about, and this has them in spades.

Posted by Lisa Rullsenberg at 9:57 am

You evidently liked it much more than I. It was just such a sad movie (well, miserable) and in a large format theater, the isolated head shots were just massive.